First, the metal field perimeters sit on top of the tabs of the foam tiles, perimeter does not contact floor directly. I suspect this should be the same for Portable Competition Fields Perimeter.

Not quite. The portable perimeter does not use rubber feet as the metal perimeter does, rather it has a built in notch that forms its own foot. Here’s a cross section from the assembly manual that I added a couple labels to: 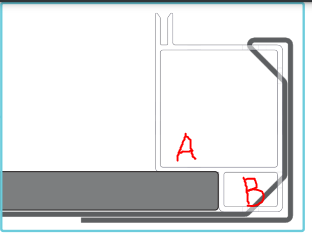 The B portion of the perimeter is intended to replace the robber foot, and sits directly on the floor (ignoring the velcro tie for now), whereas the A portion sits on the tiles themselves.

Our portable fields arrived last week, and we used 8 of them at our championship weekend across 3 tournaments (VRC MS, VRC HS, and VEXU).

Assembly was easy. Most/all parts clearly only go in one way and the whole thing went together pretty quick. Per the instructions, we built the whole thing from the bottom up – first lay down the foam tiles with the straps underneath, then assemble the bottom rail all around, then slide the vertical posts and plastic panels in, then the top rail with the GPS codes. It is a little annoying that the panels that go in the middle of each section aren’t all the same length – the 4 in the middle of each side are slightly longer than the other 8. But once you know that it’s not a big deal.

Probably the hardest part (or at least, the part that requires paying the most attention) was installing the top rail. Because of the GPS code the 12 pieces all have to go in exactly the right place. Each of the joints is numbered, so the first piece has a “1” on the left and a “2” on the right, next piece is 2 and 3, etc. through to the last piece which is 12 and 1, and then you match up the numbers to get things in the right order. One point of confusion was that the instructions don’t make it super clear how the GPS code is supposed to be oriented relative to the field setup (i.e., which side should have the red alliance station, which side should face the audience, etc.). If you don’t already know that 0° is the head ref’s side of the field, it would be pretty easy to orient the GPS code incorrectly.

Getting the straps adequately tight was a bit tricky but doable. I did still have to shift the walls back into position over the tiles occasionally, but not as much or as often as I would’ve had to with metal perimeters.

I love that the bottom rails contact the ground directly. I always found it annoying to deal with the rubber feet on the metal perimeters (getting them aligned in between the tabs correctly, forgetting to take them off for transport, losing them, forgetting to pack them, etc.) so having that functionality built in is a big plus.

There is no included solution for mounting the driver interfaces to the fields. We ended up using some small squares of 3M Dual Lock (my favorite) to mount them to the top of the outside wall, but this was less than ideal; tension from the cables yanked them off several times throughout the day. We are kicking around some ideas for making custom posts to mount the driver interfaces on and if any of them come to fruition I will share our solutions here. Maybe this concern will be obviated by the new field control system which is apparently coming for Worlds this year.

No structural damage to any of our fields. There are a few light scratches from where robots have run into the walls, but that sort of thing is to be expected. Some of the scratches are on the black portion of the GPS code (through to the white plastic underneath) but nothing bad enough to stop the code from working. I suppose we could always color scratches in with a sharpie or something if we needed to.

Since the field is so modular, if any parts break in the future, it would be nice if we could order individual components to replace just those parts, or to keep a few spares on hand for quick repairs during an event.

The carrying cases are a bit more of a mixed bag. The fabric itself feels sturdy and high quality, it’s nice to have things on wheels, and I love how small everything breaks down. But the straps around the outside are another story. A couple bags arrived with broken straps/buckles, and during load-out I picked up a bag by those straps and one of the plastic buckles immediately snapped. I’m also not really sure what the straps are for. The bags themselves are held shut by a zipper, and closing the straps before the zipper wouldn’t really achieve anything, so what are the straps for if not lifting the case?

Additionally, the carrying handles on the field tile bags are kind of an awkward length – too long to comfortably carry with your hands (you end up holding your arms pretty high, if you’re around my height anyway), but not long enough to sling over your shoulder, which our old Softtiles bags could do. The bags themselves are definitely nicer and sturdier than the Softtiles bags though.

Overall, I’m really happy with these fields and I’m really looking forward to being done hauling metal perimeters around.

Thanks for the detailed review. I’m looking forward to seeing these at worlds. I’ve been skeptical about durability, and want to be sure it’s worth buying the half-dozen we’ll need for our organization. I do like the idea of built-in gps strips (unfortunitely, I’ve already have 5 sets of stick-on). I expect we’ll see a good “used” market for old field perimeters spring up soon…

At the Michigan State Championship, the portable field perimeters were used for skills fields and many teams had issues with their auton runs because the alignment was different than the metal fields.

My team may be in the market for an old field perimeter if someone wants to sell us their used one and replace it with the portable model. Indiana team by the way.

I wonder if there is any intent to have the option to have the clear plexi-glass instead of the opaque sheets they currently have. As an EP, it is very helpful, especially on a risen field, to have a lane of visibility for the audience to see through. Which it currently does not have. I understand that they need to be opaque for VRCAI sensors, but what about the vast majority of competitions where that consideration is not needed.

the option to have the clear plexi-glass

While I agree with you the reasoning for clear panels, I wouldn’t count on it, now that I’ve seen the new perimeter in-person. Adding clear polycarbonate* panels would require new tooling for manufacturing and/or increase cost (VEX was obviously trying to keep the same price-point while offering some advantages, a difficult thing to do on a product that has such a low-volume and near-zero profit potential).

*plexiglass (a trade name for PMMA or acrylic) is a shattering plastic, not suitable for robotics and specifically banned for use on robots by the game manual.

Any reason that polycarb panels of the same size/thickness as the opaque panels that come with the field couldn’t be a drop-in replacement? I haven’t measured the opaque panels but I imagine you could get polycarbonate in the requisite thickness from McMaster/wherever else.

From a rules standpoint, I think it’d likely be fine under T21.

From a rules standpoint, I think it’d likely be fine under T21.

My take on it is that it is would only be legal if replaced by polycarb panels taken from an official perimeter, based on T24. 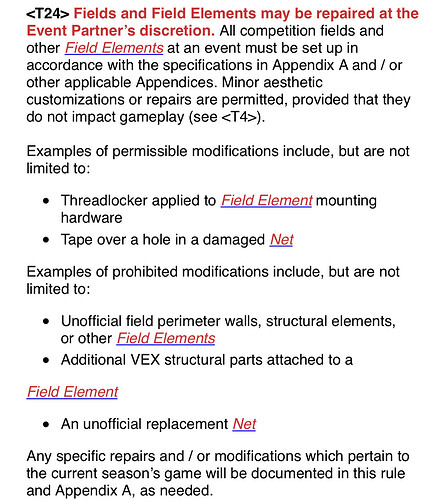 image1125×1308 290 KB
My understanding of “Examples of prohibited modifications include, but are not limited to:
Unofficial field perimeter walls, structural elements, or other Field Elements” is that replacing the polycarb would be illegal if not taken from an official field perimeter, and possibly not even then, depending on the definition of “structural elements”.
1 Like
HarryWood July 12, 2022, 3:07pm #31

Awesome reciew. Thanks for aharing. I need a little help though - how do you correctly load the field perimeter bag?

I have perimeter edges, poly walls, all connecting pieces(3 ways and Ts), and gps sections. I cant seem to fit them all into the one large bag that comes with it?

I cant seem to fit them all into the one large bag that comes with it?

The portable field perimeter should come with, and fit in, two of those bags.

I used the KB article and it wasn’t a problem to get the entire field quickly in the bag:

If you follow that, it seems like it (full bag) will not zip up but you just need to adjust it a little - like lift it up and lay it over a couple of times…sometimes everything in the inner-zip can catch and shift everything.

The next task, for me, is to see how much I can “safely” get in the bag with the attached field elements because I’m not going to detach those rollers and basket brackets every time if I can help it.

The portable field perimeter should come with, and fit in, two of those bags

My understanding is that the kit comes with one large bag and two smaller bags. The latter two are for tiles only.

Ours all came with two of the long wheeled bags per field, which is what’s listed on the product page:

An all new and improved VRC Field Perimeter! Assembles in minutes with a simple snap-together construction. Notable improvements from the original VRC Field Perimeter include: Weight has been cut nearly in half GPS Field Code is printed directly...

Huh. My bad. I ordered bulk so for some reason I thought 1 large and 2 small. Good to know its 2 of each. That’ll probably solve the problem!

Thanks for correcting my misunderstanding.

Not really, future has opaque panels and GPS strips on all fields as they want better sensor performance. (discussion at EP Summit). Imagine if you replace the opaque panels on portable fields and then can’t find them when they are required on all fields in upcoming seasons…