On May 10th, 2012, The following updates were made to Appendix F - College Challenge of the VEX Sack Attack Game Manual.

Rule 4, regarding the autonomous mode was amended with Rule 4a, as shown below.

Based on what the Game Design Committee saw at the 2012 VEX Robotics Competition World Championship and feedback from College teams across the world, it was determined that interaction with robots during the autonomous period needed to be severely restricted. This will ensure that teams have ample reason to continue to develop advanced autonomous routines and take advantage of the custom sensing and processing rules in the College Challenge.

On May 14th, 2012, The following updates were made to Section 2 - The Game of the VEX Sack Attack Game Manual.

–
Two clarifications have been made to the definition of Scored. Changes have been bolded for emphasis.

Scored – A Scoring Object is Scored in a Goal if it meets one of the following criteria.

For a Scoring Object to count under either clause, it must remain in a Scored position, if/when all Robots were removed from the field. (By removed, we mean removing the robot and its contents from the field. Referees will be instructed to gently pull robots away from the Goal if necessary) i.e. The Scoring Object must not be supported by the Robot.

The intent of the first change is to make it clear that a Scoring Object which is overhanging two High Goals or two Troughs is considered Scored in both.

The intent of the second change is to illustrate how the referees will make the determination of Scored when there is an issue of support.

Rule <SG11> has been updated as follows. The new section is bolded for emphasis.

<G11> Strategies aimed solely at the destruction, damage, tipping over, or Entanglement of Robots are not part of the ethos of the VEX Robotics Competition and are not allowed. However, VEX Sack Attack is an interactive game. Some incidental tipping, Entanglement, and damage may occur as a part of normal game play. If the tipping, Entanglement, or damage is ruled to be intentional or egregious, the offending team may be disqualified from that Match. Repeated offenses could result in a team being Disqualified from the remainder of the competition.

VEX Sack Attack is intended to be an offensive game. Teams that partake in solely defensive strategies will undergo extra scrutiny in regards to <G11>. In the case where referees are forced to make a judgment call on interaction between a defensive and offensive Robot, the referees will err on the side of the offensive Robot.
**a. Robots which have expanded horizontally in an effort to obstruct the field will undergo even more scrutiny under <G11>, and will not be protected under <G11>. e.g. If you choose to undertake this type of strategy, your robot should be built to withstand vigorous interaction.
i. Furthermore, teams that undertake this type of obstructive strategy would not be protected by <SG3>. e.g. There is no penalty for pinning a “wall-bot”
**
All teams are responsible for the actions of their Robots. This goes for teams who are driving recklessly and potentially causing damage, but also goes for teams who drive around with a small wheel base and arm extended. Teams should design their Robots such that they are not tipped over or damaged by minor contact.

The intent of these additions is to make it clear that if you build a robot that expands to intentionally obstruct the field, your opponents can no longer be penalized for pinning you, and you are not fully protected by <G11>. i.e. You should expect robots to aggressively try and push through you.

Rule <SG4> regarding autonomous interaction with the robot has been modified. The new version is as follows:

During contact with the Robot, the Drivers or Coaches may not intentionally manipulate or modify the position of any Scoring Objects relative to the Robot’s overall system, either by direct hand contact or indirect contact via the Robot. (i.e. it is acceptable to change the orientation of a Robot that includes Scoring Objects in it as long as the position of the elements relative to the Robot is not changed).

Drivers or Coaches also may not change the configuration of the Robot in any way other than in the act of fixing the Robot (i.e. it is okay to reposition the robot relative to the field, but it is not okay to manually lift up the Robot’s arm, unless you are in the act of a repair). Any changes to the Robot’s configuration performed during the act of repair must be reversed before the Robot can leave the Alliance Starting Tile.

The intent of this rule is to allow teams to fix Robots that are unable to move, to reposition and/or reorient Robots, and to activate additional autonomous modes by interacting with the Robot via sensors or buttons.

The intent of this rule is not to allow teams to manipulate their Robot in such a way that they are controlling the Robot via human contact or creating motions that lead to scoring.

Based upon what the Game Design Committee saw at the 2012 VEX World Championships, we decided it was necessary to reduce the amount of interacting teams could do with their robots during the autonomous period, however still allow it to be an option. These new rules now mirror the rules for the Programming Skills Challenge, ensure that robots can still be interacted with during the Autonomous Period, however the influence of these interactions will not be overwhelming.

On May 22nd, 2012, the following updates were made to Section 2 - The Game and Section 4 - The Robot of the VEX Sack Attack Game Manual.

Rule <SG8> has been updated as follows. The new section is bolded for emphasis.

<SG8> Robots are not permitted to intentionally place Sacks, while not in the process of Scoring, on an opposing robot. Violations of this rule will result in a Disqualification.

The intent of this rule is to prevent teams from using Sacks to damage or disrupt opposing robots by dropping them on the robot. However, it was not intended to penalize teams who were trying to score in a Goal that was being blocked by an opposing robot. This new wording makes that clear. If you are trying to Score (i.e. dropping Sacks in a Goal), you will not be penalized if your Sacks land on an opposing robot.

Rule <R7c> has been updated as follows. The new section is bolded for emphasis.

The intent of this change is to allow teams more freedom in their hardware choices. You may now use any of the listed screw types, as long as they are no longer than 2".

Rule <R7f> has been updated as follows. The new section is bolded for emphasis.

The intent of this rule is to allow teams a variety of choices, while restricting teams to materials that are both safe to cut and to work with. We expect most of our teams to just use polycarbonate as they have in the past, but wanted to make sure alternatives were available for those who did not have access to polycarbonate.

On June 22nd, 2012, the following update was made to Section 2 - The Game of the VEX Sack Attack Game Manual.

Rule <SG9> has been updated as follows. The new text is bolded for emphasis

<SG9> Robots may not intentionally grasp, grapple or attach to any Field Elements. Strategies with mechanisms that react against multiple sides of a field element in an effort to latch onto said field element are prohibited. (See figures 8-10) The intent of this rule is to prevent teams from both unintentionally damaging the field, and from anchoring themselves to the field. Violations of this rule will result in a Disqualification.

The intent of this change was to better explain what type of mechanisms and actions are covered by grasping, grappling and attaching. 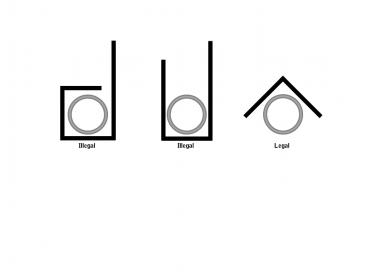 Rule has been updated as follows. The new text is bolded for emphasis:

Rule has been updated as follows. The new text is bolded for emphasis:

The intent of this change is to make the starting rules consistent with what is seen in regular matches.