When configuring a Raspberry Pi 4B with Tournament Manager the attached error appears when booting up the Raspberry Pi. 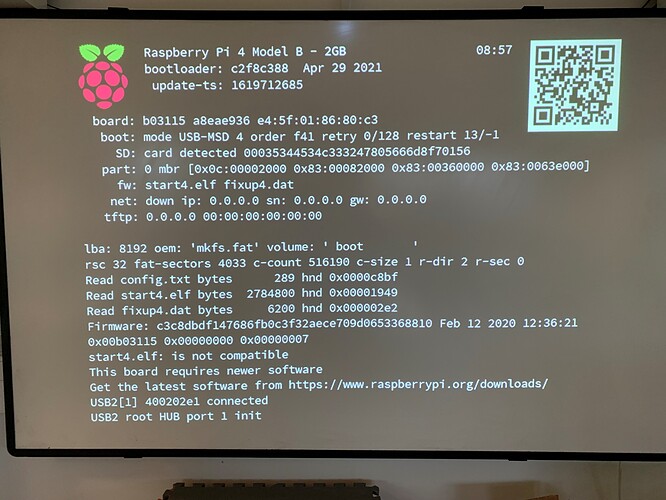 The latest image has been downloaded from https://vextm.dwabtech.com/
The install of the same TM image has worked successfully on RPi devices of the same model just days earlier.
Swapping out the SD card on a working RPi with one that does not work brings up the same error, suggesting the issue is with the hardware itself.
I have tried four of the same model of RPi and am getting the same error.
When installing a clean RPi Raspbian image then RPi boots up fine, it is just the TM image that doesn’t work.

The error message suggests there is an issue with start4.elf

Any help would be appreciated.

My guess is that there are multiple versions of the Pi 4 hardware out there and there has been a change since the TM image was done. @Dave_Flowerday might be able to add more.

In the meantime, if you boot just the clean Raspbian on a device that works and run proc/cpuinfo then do the same on the newer one that doesn’t. you can compare the version details.

You could try copying the relevant files from the boot partition of the new version of Raspbian to the same location on the TM image.

Many thanks for your suggestions.

Looking at the hardware the version that works is Rev 1.4 whereas the model that doesn’t is Rev 1.5. So that explains thats bit.

I have taken your suggestion of copying the start4.elf file from the working to the faulty one and we are now a step closer. The TM image now boots but is stuck on a black screen with the TM logo on.

A big jump forwards but just a little bit to go!

Do you know why the new error occurs at all?

Thanks for bringing this to our attention. Yes, it would seem that either the new hardware and/or a newer version of the embedded bootloader (which lives on the RPi itself, not the SD card) requires a newer version of start4.elf which is the first thing loaded from the SD card image. I may be mistaken, but I don’t think we’ve ever had the Raspberry Pi make a change like this before to existing boards, so it isn’t something we were looking out for.

Thanks for your reply. I’ve had a go at copying a few files over from a clean install of Raspberry Pi OS but not had much luck unfortunately.

Appreciate you and your team looking in to it further.

Any update on this? We are running the state event in a few days. We have 9 new Pis. 3 work, 6 have this exact problem.

Sent you a PM about this, with the link to the new Pi 4 code.

Can I please have the code too? I’m in the same situation. I have an event this week and most of my Pi 4’s don’t work.

Thank you, I’ll try this out!

Sorry to resurrect an ancient thread but Raspberry Pis are hard to come by nowadays and we have a few Rpi 4B that were unused and trying to load and use TM on them.

I had an issue where no matter what was tried (different cards, different imaging software) the only thing that was visible on the screen was the rainbow. In fact, all imaging software used did the job just fine (Win32DiskImager, Balena Etcher and the official Raspberry Pi Imager app).

Turns out this is normal for the Raspberry Pi4B if the HDMI connection used is the one nearest to the audio jack. Moving to the HDMI port nearest to the USB-C solved it and TM is running.

I edited my ranting but left this here. Just wanted to share in case someone else goes through this process not knowing how the micro-HDMI ports work on a Pi 4B. Learn something every day.