Hello, my team and I are making a clawbot and moby combanation, but we are facing some probelms with the Vex V5 motor which is supposed to raise the claw arm, it is over heating causing the motor not being able to lift the claw arm. So we were wondering if there was a fan or some other cooling device that we could connect and keep next to motor to stop it from overheating.

instead of trying to cool your motors down (which is impossible to legally do by fan cooling) you should try to stop your motors from overheating in the first place. it’s very possible to make a lift with 1 motor without it overheating, so you likely have some mechanical problems leading to it heating up. pictures of your lift would be helpful to identify what the issues are.

So we were wondering if there was a fan or some other cooling device that we could connect and keep next to motor to stop it from overheating.

No, there is not. Unfortunately, it would not do much good even if there was a fan because the plastic case acts as a really good heat insulator. You could cool the plastic but still have the motor itself burning hot. A way many teams deal with overheating is a technique called hot-swapping. It’s where you physically remove the motor and place a different one in when the old one gets hot.

As xenon said, you should focus on the root of the problem. You won’t get very far with cooling the motors unless you physically swap them.

One other thing that nobody else has mentioned, is how long does it take for the motor to overheat? If it overheats in 1 minute you have a big problem, but if it takes 10 minutes to overheat then you can just cool it down in between matches using a fan.

A upside down compressed air canisters are used as well in order to cool down motors.

which is impossible to legally do by fan cooling

I think that would violate all of R4

well if you do a poor job then it would be unsafe.

A) a high rpm fan with low torque unless you make the blades out of a sharp material will probably not damage field elements or scoring objects anymore than a 8 motor drive that some teams have this season.
B) Same thing this isn’t a massive fan blade that will injure people.
C) How would a fan have a risk of entanglement? A string of another robot is flapping around and gets caught? The robot with a string being loose would also be at risk for a entanglement violation.

I would consider most trays during Tower Take over many many times more dangerous. They have a much higher risk of entanglement and they can fly out and hit actual humans and not just parts of the game.

So, are you using the gear ratios in the Moby design? Motors tend to heat up when they draw too much power and a proper gear ratio helps reduce the draw. You will also see other teams using rubber bands to pull up on arms to counter the weight of the goals.

As others have said, if you post a picture of your robot on this thread the forum members will be happy to share advice. 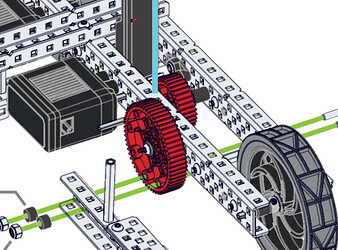 Not an effective one

A) a high rpm fan with low torque unless you make the blades out of a sharp material will probably not damage field elements or scoring objects anymore than a 8 motor drive that some teams have this season.

You can have all the speed you want but unless you have fan blades that can produce some decent cfm you won’t get anywhere. Your only real option would be to use poly (unless you have a way to cnc gears, maybe) which would be an absolute waste- seeing that fans blowing on the case would be extremely inefficient due to the low thermal conductivity of the plastic motor case.

A vrc fan made of vex parts just doesn’t make sense right now, but I’d like to be proven wrong

There is absolutely no reason to make a fan as of now and it would be difficult to create an effective on at that.

A vrc fan made of vex parts just doesn’t make sense right now, but I’d like to be proven wrong

As Hudson_Robotics said, make sure you are using gear ratios. For our lift we have and 12:84 ratio, or 1:8. Also, try to get torque cartridges for the motors if you coach can get them. They are red in color and go inside the motor.

On a side note, durning completions motors will end up overheating one way or another for most teams so always have a back up plan like a way to cool your motors or a quick swap system. Our team came up with a cooling system to cool our motors in between matches-

Wow this is pretty cool but is this even allowed by vex since some other people told me that you can’t have any fans for cooling.

Not during a match, no, since it functional.

We have it as a back up in case our motors overheat and stop functioning.

to cool our motors in between matches-