I am presently working on a flying robot experiment with my high-school robotics students, and we are trying to figure out how we can successfully working variable-pitch propellers using VEX V5 elements to provide the lift and thrust we need to get the robot moving. However, we so far have not been able to find many tips or suggestions on how we can successfully accomplish this. We’ve already seen that VEX Robotics sells these small, disc-shaped propellers for use in their Zip Flyer sets, but we have not seen an actual, much larger variable-pitch propeller attempted with VEX parts thus far. 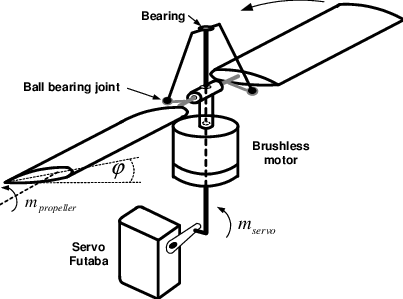 Does anyone have any tips or suggestions as to how we can successfully achieve building such a propeller from VEX elements that generates sufficient air?

Thank you all in advance for your time.

Vex is too heavy for flight. Nobody has been able to do it. I would suggest using something other than V5

Thanks for letting me know, Doubble. I actually thought about throwing this topic in a general VEX Discussion, but apparently there’s no such thing, so between IQ and V5 I had to pick the one that we were using.

But is there a way we could still build a variable-pitch propeller prototype using V5 elements before placing an additional order for multiple IQ kits?

As far as I am aware, there would be no easy way to do this in IQ or V5. Vex generally wasn’t designed for tasks like this. Based on some basic Wikipedia research, a variable-pitch propeller is a very complicated mechanism that no plug-and-play system could make.

you could make a model of a variable pitch propeller, but it would be technically impossible to make one that could actually provide flight with v5 components, which are bulky, heavy, and not at all designed for things like this.

I am not too knowledgeable in anything like this, but would 3d printing work for your purposes?

If not, can you take some components/modules off of pre-built systems, like drones, for your goal?

Vex sells these thin plastic sheets, you could attach them to a central spine and make an aerofoil shape, and with maybe a bit of planetary gearing you could make it variable-pitch.

If you manage to make a machine that flys using vex v5 components please post it here. I’d even make a new topic. You will forever be considered a legend. As far as I know it hasn’t been done.

Based on some basic Wikipedia research, a variable-pitch propeller is a very complicated mechanism that no plug-and-play system could make.

Well, except for LEGO. You can build anything with LEGO. Except then you lose functionality.

If not, can you take some components/modules off of pre-built systems, like drones, for your goal?

I guess we could buy some drones to pull motors out of, but it would cost a lot more money.

Any parts that VEX sells in the V5 Line would be considered a V5 element.

Any parts that VEX sells in the V5 Line would be considered a V5 element.

Okay, got it. I was asking in case you are following VRC rules, Vex U guidelines, or if you have other goals in mind.

In my experience, the best way you may achieve flight is:

In the end, just a V5 brain + battery + a few motors is already heavier than most drones that have equivalent or higher motor capabilities. This makes V5 a subpar choice for flight.

This has been tested, talked about, and experimented with since the start of the forum, by many people.
The V5 and IQ systems are too bulky and heavy for flight, and there’s not much else that you could do to make them less heavy. A V5 motor combined with nearly any propeller will not be able to provide sufficient lift to move itself, and will have an even harder time carrying the microcontroller needed to move the motor.

TL;DR: No.
You might be able to lift a ball in midair, but not lift a motor.

I had a student obsessed with this idea just this past season. We talked about all the reasons why VEX is not made for this and I sent him to the forums. He was still focused on it, so he spent some time in summer researching and documenting it. In the fall, he built a VEX airframe to test the internal resistance of the gear train he would need for the rotor speeds… Total failure, but he learned a TON by investigating and documenting it (and we don’t really start VEX until November/December).

It would be great to explore what you would need to make it work, but you will be grounded with V5 parts.

stealing modules (propellers, frames, motors) from other products (like drones), and putting them on your robot.

All right, well, if we have to invest in buying $1000 drones to do this, then fine. How do we connect the drone motors to the VEX Brain?

You can always find some cheap(ish) brushless motors from somewhere else instead of tearing apart an expensive drone. Depending on the size/power/speed you need this will almost certainly be cheaper than tearing apart a drone.

Wait a second…
We say that the brain and battery are too heavy for flight, but what if they aren’t in flight, for example on the ground? Then you could kind of tether the flying component to the control system, sort of like the tetherbots in Change Up.
EDIT:
Even better, you could use the less heavy VEX Pro motors combined with a light polycarbonate frame to make something that might actually fly a bit.

Wait, what if you take off the actual plastic and stuff of the brain, and just barebones it? I don’t think that wouldn’t be vex legal. You could probably use one speed motor for the whole thing and use sprockets plus chains. Oh my god can a Vex drone be built? Lord help us all. tbh you can make it more like a vex helicopter so it could move forward

Wait, what if you take off the actual plastic and stuff of the brain, and just barebones it? I don’t think that wouldn’t be vex legal

You could probably use one speed motor

The weight of the motor/ cartridge is also a big problem when making a vex drone, maybe if you use a non vex motor with the electronics from the brain you could get somthing that might fly, but a vex drone would never be possible to build and still be competition legal (also remember that the battery needs to be the vex made batteries)

Thanks for the reminder, 7996B, but we would never take such a robot into competition. There’s another team at our local elementary school that is trying to invent the first flying FLL robot from Mindstorms, but with VEX’s guidelines we already understand it wouldn’t be possible to arrive in the arena with such a robot. After all, fast-spinning propellers would definitely count as hazardous moving parts. That’s why this topic doesn’t have any “Competition” tags attached to it. Our project is just an experiment we’re conducting on campus.

You can’t. I tried last year during the summer. 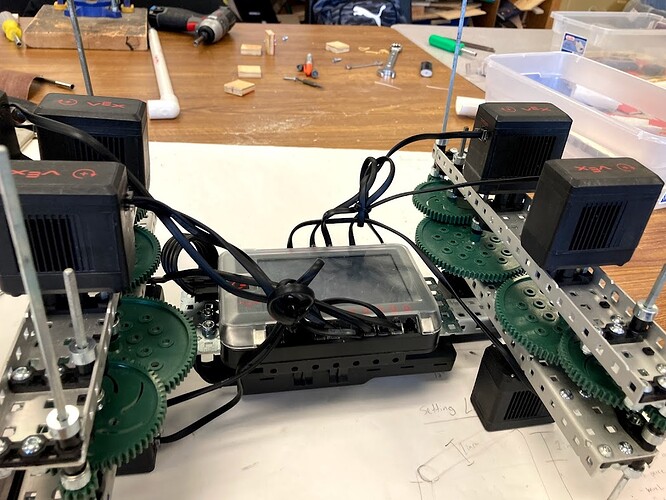