Does Anybody know more about the release date for the text version of vexcode IQ? It used to have its own graphic, but now it only shows one discrete Comment with Q2 for release…

I’d assume it’s coming in Q3 now because Q2 is over. The vex ‘coming soon’ page was updated like this. (most of the stuff there was labeled Q2, and now they are Q3). Someone just forgot to update it, thats all.

Well for calendar year, Jan Feb and March would be Q1 and April May and June Q2 so Q2 still has the best part of a month to run…

We just released VR Python last week, which has the new Blocks + Text interface (in preview form). This will give you a good idea of what VEXcode IQ “Text” support will look like initially.

The entire development team is finishing up week 12 of working 100% remote… so between that and creating VR, it has put some of our original estimates a bit off. We’re working as quickly as we can, however.

Does this mean that VEXCode IQ text with Python support is not planned for in the near future?

Thanks @tfriez For the info. This is good news.

Why would we need C++ and python? I would rather only have one with good support. Not sure why we would need an interpreted language (except for VR).

i think it probably comes down to preference.
personally i would use c++. maybe someone else would rather use python or even blocks.

Does this mean that VEXCode IQ text with Python support is not planned for in the near future?

IQ will not support Python.

Why would we need C++ and python?

We get C++ pretty much for free as we already have it.

Not sure why we would need an interpreted language

You can do some pretty neat things with Python on V5, some things are easier than using C++. We actually compile the Python source code into byte code on the V5, performance is really good.

Hi @tfriez
In the IQ C++ version will there be additional functions for the vision sensor?
is that what you mean by “New Sensor Support, Tutorials”

can the vision sensor stream the video feed to a phone when connected to a Vex IQ brain?

VEXcode IQ Blocks currently supports the VEX Vision Sensor, so yes - that same functionality will be in C++.

The vision sensor can either be a wifi hotspot to live stream data to your phone/device OR send sensor data to a VEX IQ/V5 robot - it can’t do both at the same time.

Hi @tfriez
How is the C++ text-based programming VEXcode IQ 2.0 coming along?

Pretty good, actually… we’re doing some final clean up on displaying compiler errors for the C++ interface and finishing up testing as well. We’re targeting a public preview release early next week. 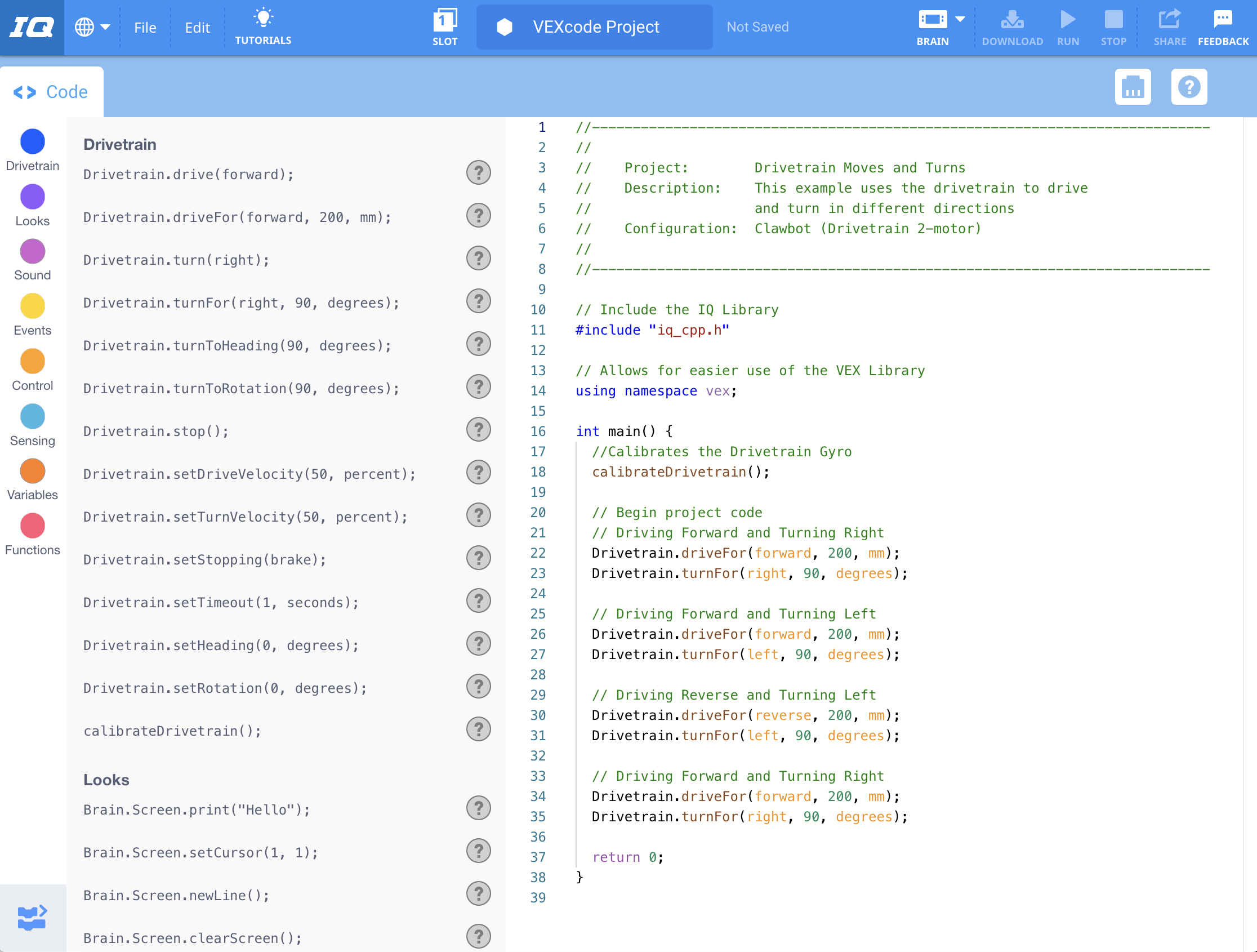 What exactly do you mean by preview?
Also, would it be possible to run vexcode with wine? I switched to linux a few months ago. I understand there wouldn’t be an official release for linux because next to noone uses linux and does iq.

This looks great! Thanks

“Preview” basically means that the knowledge base and tutorial videos are still in development as the visuals are being locked down as we speak.

The final release will come closer to end of August to add all supporting materials and also fix any bugs reported during the preview period.

By the way, the VEXcode IQ 2.0 Preview has been released.