On iPads, you should use Safari. Chrome’s implementation makes it (currently) impossible for us to save the .vrblocks file type correctly. This is something we’re continuing to investigate, however.

Students were told not to use Safari because of the problems reported.

I’m not currently aware of any issues on Safari - can you describe what you’re seeing that is causing the problems?

Just the issues that you have eluded to in the past couple of days concerning older iPads. My students school issued iPad are approximately 3-4 years old. Along with Barin’s response which I now see have been edited. Plus the update post approximately 5-6 days ago.

Which version of iOS are they running ? If it’s iOS 12 or earlier I’m not sure how well that works, I know I have one device with iOS 12 that always downloads the file as “unknown” and asks where to save.

My School issued is at 13.3.1 but i’m not sure if the students iPad were updated prior to our school being closed. The iPad are Managed which requires them to be connected to the districts network to update apps and iOS. So, it os entirely possible that some of the iPads are at 12 or earlier.

If you have them post to the devs using the “feedback” tool and note the issue they’re having, we can tell what version OS they’re using.

So I have been messing around with Vex VR and loving it so far. The playgrounds are amazingly helpful for teaching from home. As you can see below I think there might be something wrong with the duplicate function. I am running in chrome and when I duplicated the blocks vanish. While they are still able to be interacted with it becomes difficult to work on the blocks without remembering the code. Keep up the great work on this platform. 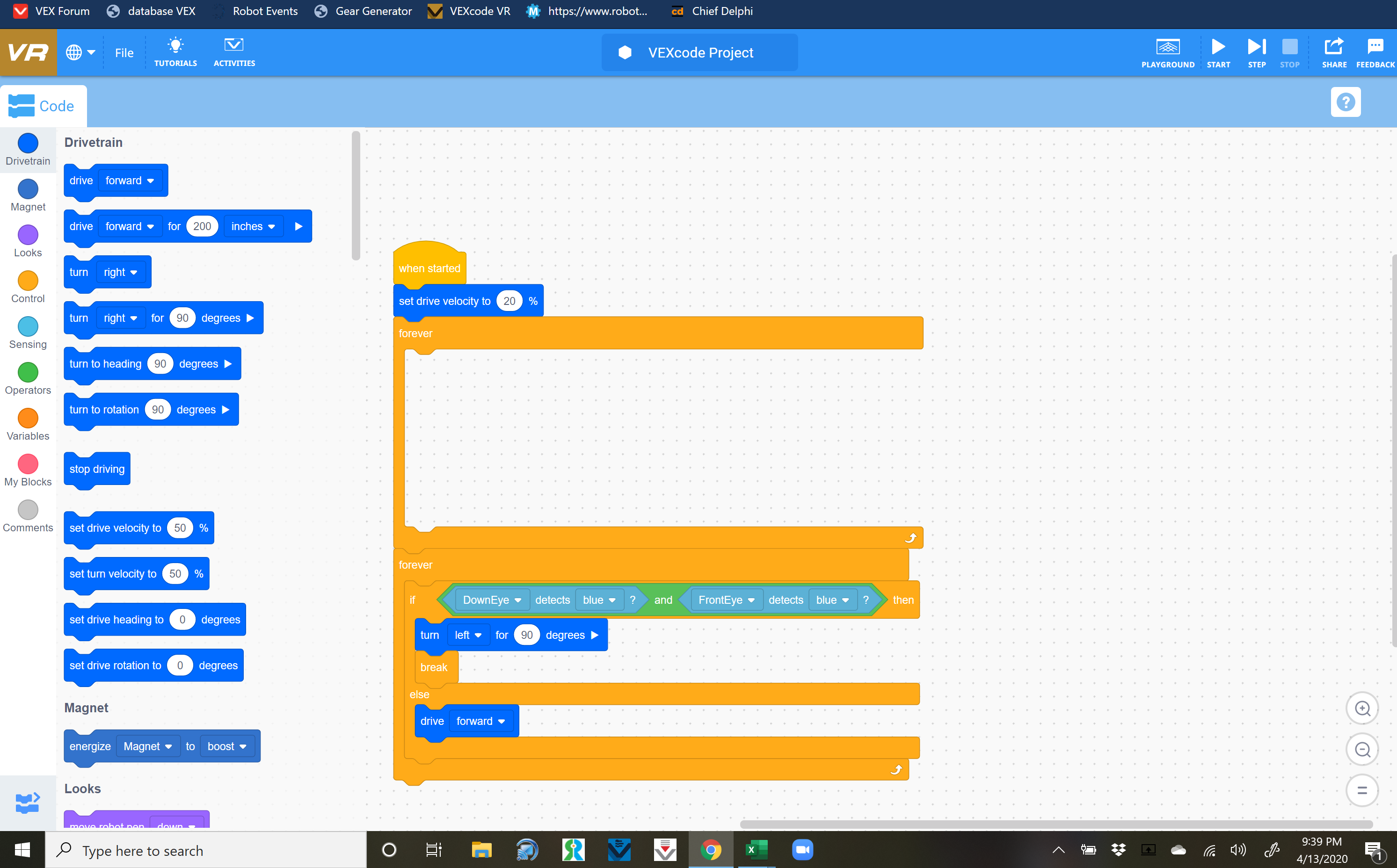 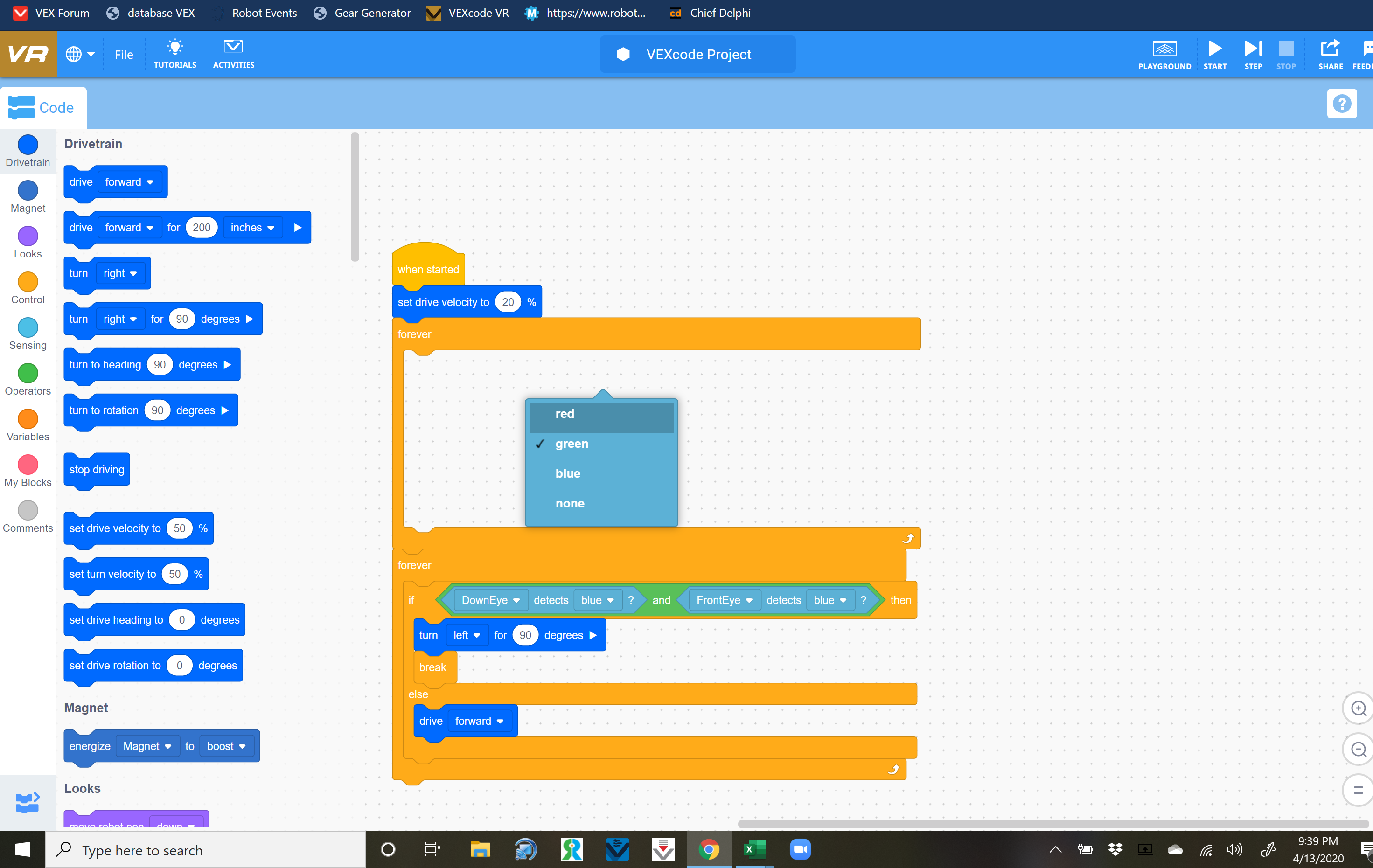 Thanks for the feedback! We’re working on a fix for that bug and hope to have something pushed ASAP in the next few days.

The workaround for it is to collapse and show the tool at (the button in the bottom left corner) - that’ll force your blocks to reappear.

Would you please explain the issue you are seeing a bit more? I don’t understand what I’m seeing in your images.
We have been using duplicate and it’s worked in the scenarios that we’ve been using it in.

The issue is the the block turn invisible but you can still interact with them. I had experienced the same problem. They will some times also glitch to visible and then non visible.

The root cause of the issue is if you use the “duplicate” feature while your code is actively running in the Playground - this was a bug that was introduced when the block execution highlighting feature was added.

Is there a reset block? I can’t seem to find one. I see the button to reset on the playground but I really need a reset block that I can add to a program that resets the robot on the field.

Also - I don’t see a way to utilize the myBlock parameter inside the block itself, or a way to have the argument be a variable.

AARRGGHH - just lost code. I used undo (ctrl-Z) I think 3 times to try to get back a myblock I had thrown away and it did the undo correctly one or two times then the last time the entire screen was blank and redo is unavailable in the context menu.

Ah! The Castle Crasher playground emulates everything I loved about the old Virtual Worlds. Which was driving your robot off the edge. Thank you so much!

We haven’t made the My Block VR page yet, but it works the same as IQ / V5.

My Blocks is one of the block categories within VEXcode IQ Blocks. Some other categories include Looks, Sound, Sensing, and Variables. My Blocks are used to create a sequence of blocks that can be...

See above messages in this thread about Undo. You can get to it by right clicking on the workspace.

No, there’s no way to reset the field “mid run” - you’d have to reset using the reset button in the Playground.

Oh I see, thanks. I was expecting a right click duplicate of the parameter, rather than a drag.

Re undo - yes I saw how to access undo. My issue was that I used undo but when I used undo several times in a row, while in the middle of a long session of coding in which I had made many changes, the undo took me back to a blank programming window, rather than just undoing the latest change. Unfortunately I’ve not been able to replicate this issue.

Thank you so much! VR.Vex has been invaluable as a replacement for my usual EV3 Robotics. I’m excited to hear that you are developing more playgrounds. I’d love to see one in which I could incorporate different sensors and requirements to create a complex multi-step challenge for students to solve.

Is there any update on the timing for implementing VexText coding as opposed to blocks?

When the new game comes out will there be playgrounds for those?

Will there be a way to change the robot’s sensors?
(ex. adding sonars to the side for the mazes)