Viability of Passive Descorer for Change Up

So I have had this Idea for a while, and have decided to bring it to the VEX forum. I thought it might be nice to have a passive descorer on the back of a robot, that could quickly descore the goals. Now, obviously, well built intakes and a pooper would probably be more efficient, but this might be helpful for newer teams.
Here is my thought process of this idea:
I decided that since this would probably take some wear, as it would probably be constantly running into things, so I decided to build it out of boxed U-channel, with some spacer boxing to make it very sturdy. It would use rubber bands to hold itself in place, and probably deploy similar to anti tips in TT. Here is an image in Fusion 360 of it folded up: 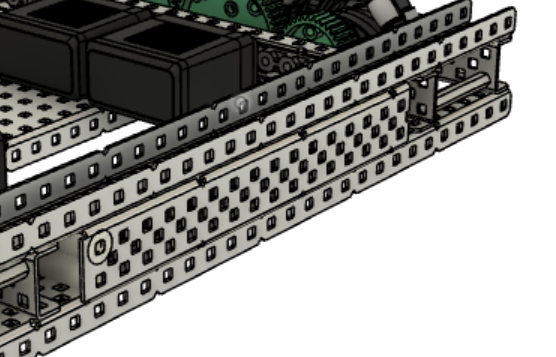 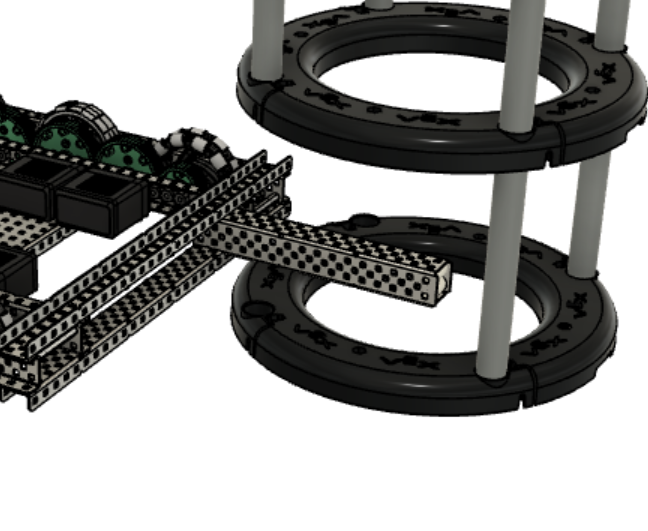 It reaches pretty far into the goals, and would make it easy to sweep out.
Thoughts? Ideas? (Constructive) Criticisms?

Looks solid. If anything, I would say that it would just take a decent amount of time (on a tank drive). You have to line up with the goal with the back of your robot and then swipe back and forth.

I considered doing it with passive descorers on the side. Then you can merely drive by a goal and pull out the ball. For descoring multiple balls, you could simply drive back and forth.

I agree with the part about the Tank Drive, I modeled it on one because I had designed one to get some more experience earlier. Our robot is on an x-drive, and I think that strafing would make this much more easier to use. I think that having the on the side might make it hard to align with the corner goals, though.

I’ve been using a stick bolted to my robot as a descore mechanism all year and I can confidently say its very useful even at higher levels of play.

@Got_a_Screw_Loose this is your time to shine

If your intended audience is newer teams, this seems like it may require a high level of build quality to be effective at all.

I mean, not really. it just needs to be sturdy, long enough to reach into the goal, and able to flip out. My CAD model up above is really just to show the concept.

Personally I highly recommend designing your intake to be able to descore, however having seen @DrewWHOOP compete, I can’t deny that it is viable option, and with enough practice can be pretty fast.

I’d also love to see a VEXU team create a motorized one, too…

I’d also love to see a VEXU team create a motorized one, to…

Was legitimately thinking of doing so. Especially for the 15” bot.

absolutely not. my team’s robot might overall be built well, but our descoring arm was just a c channel bolted on with no thought

I was talking more about the deploy, and specifically the way it was designed in the CAD.

We have this on our robot and it does make quick descoring faster, once you get used to driving it

Edit: To elaborate, our robot could still descore from the intakes, the de-scorer just made it so we wouldn have to turn in some cases. E.G. We could score in an edge goal then back into the center goal and de-score.

I honestly don’t see this being as effective for intakes that can just descore. It would take less effort to get ok intakes and wedges for the goals that will be

I honestly don’t see this being as effective for intakes that can just descore. It would take less effort to get ok intakes and wedges for the goals that will be

I agree, but for rookie teams or a team that’s having to rush it’s viable and even competitive with driving practice. It’s by no means ideal but will work in a pinch.

@Got_a_Screw_Loose this is your time to shine

I hath been summoned.

The video above depicts my mechanism in action. It’s not the best example, but at least it’s clear. It’s a passive deploy and uses the chassis to descore. When not in use, it folds in under the lift. It is one of the coolest parts of my traybot, but it is admittedly difficult to use. This past weekend on 3/13, my driver was able to use it to much success at the Mid-Ohio competition. (We seeded 7th out of about 60 teams and later got DQed in QF, but this isn’t the time to share my opinions on that decision.)

I call it Vlad based on its shape. It is actuated by the lift and has caught many eyes.

The 44833 middle school teams (my org) attempted a passive ram as well, but they had much less success. It is a difficult design to use. While I would not recommend trying what I did, I would argue that my design is among the theoretical best of its breed. However, it is reliant on driving skill and goals that are not overly tight. A simple ram is an easy solution, but it is very difficult to be competitive with one.

Mid-Ohio competition. (We seeded 7th out of about 60 teams and later got DQed in QF, but this isn’t the time to share my opinions on that decision.)

a passive descorer can work well, but you need to be consistent and used to it. Like robo_chickens said, you can create routes where you do a quick spin to descore a goal without having to turn and intake the goal. it really depends on how well it is and maybe the driver.