The flywheel on our robot vibrates so much that it ends up loosening screws over time. For some reason, one of the motors on the drive train (the one closest to the flywheel) loosens so much to the point that the screw is about to fall off) I was wondering if there is a way to prevent vibrations from loosening screws. Loctite might work but there is a pillow bearing that the motor is mounted to and apparently loctite does not have a friendly reaction with plastic.

This is for a motor, you can exactly use nylock nuts on a motor.

You have an imbalance in the force… er I mean in your flywheel. Bent axle or the flywheel itself is not symmetrically weighted. If you want it to work, you have to see it spin with something approaching zero vibration.

you need to stop the vibrations of you want it to work well, there must be an imbalance in the flywheel.

Our flywheel works fine, we shoot from the back field easily. To give you some specs, we have 1 200 rpm motor driving a 15:1 gear ratio. The energy loss to friction is minimal because the motor input is 197 rpm. All the axels are on pillow bearings that were tediously aligned to make sure the axels turn smoothly. I don’t think there is anything we can improve in terms of the flywheel. It’s a 2 wheel flywheel that is centered in the middle of the robot. I don’t understand what you mean by “symmetrically weighted” to reduce vibrations. I was thinking to use rubber links on some of the points that the flywheel is mounted on to isolate the vibrations. How do you suppose you eliminate vibrations?
I added photos of the flywheel if you’re interested in looking at any mechanical issues that I’m missing. 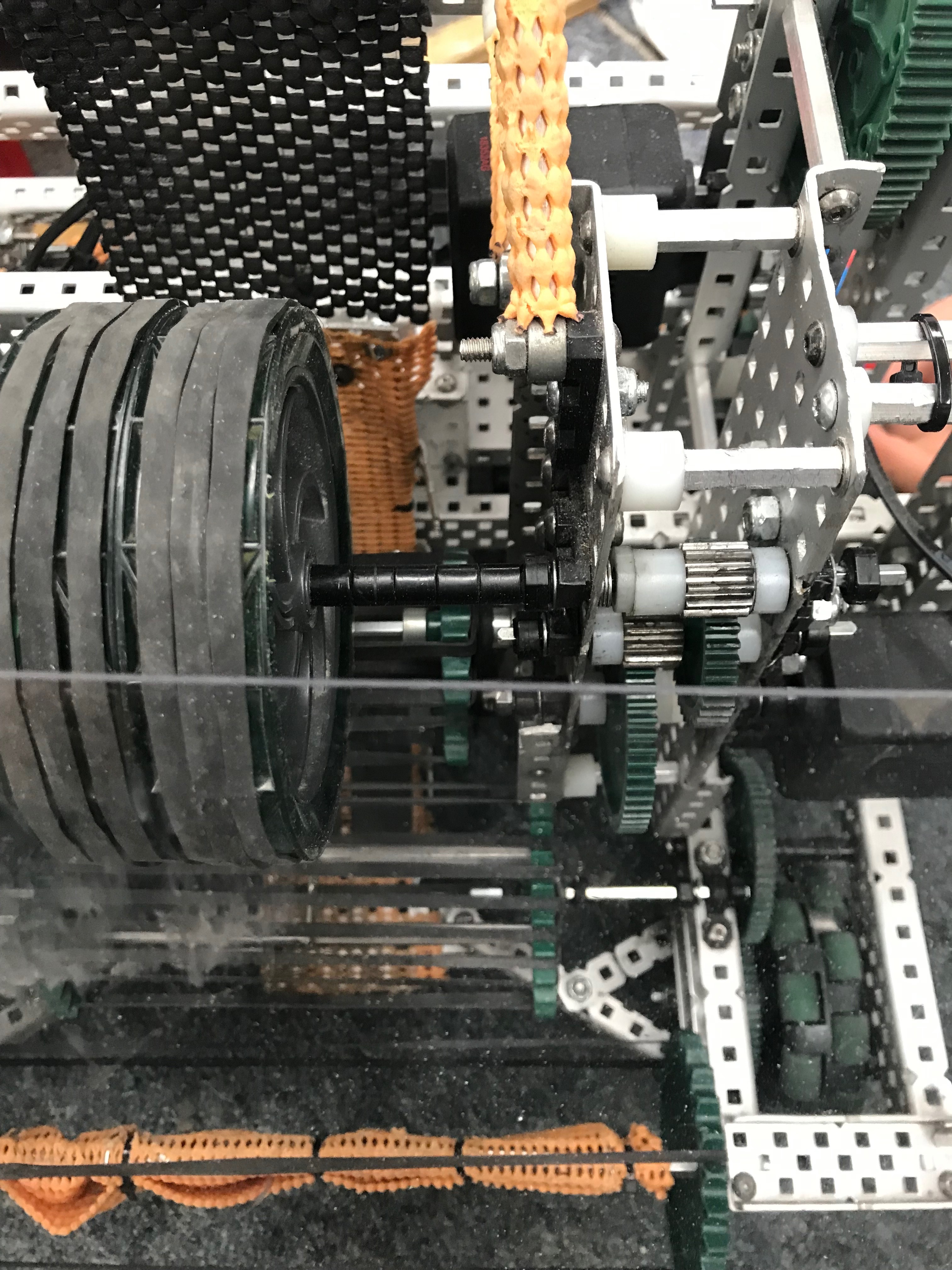 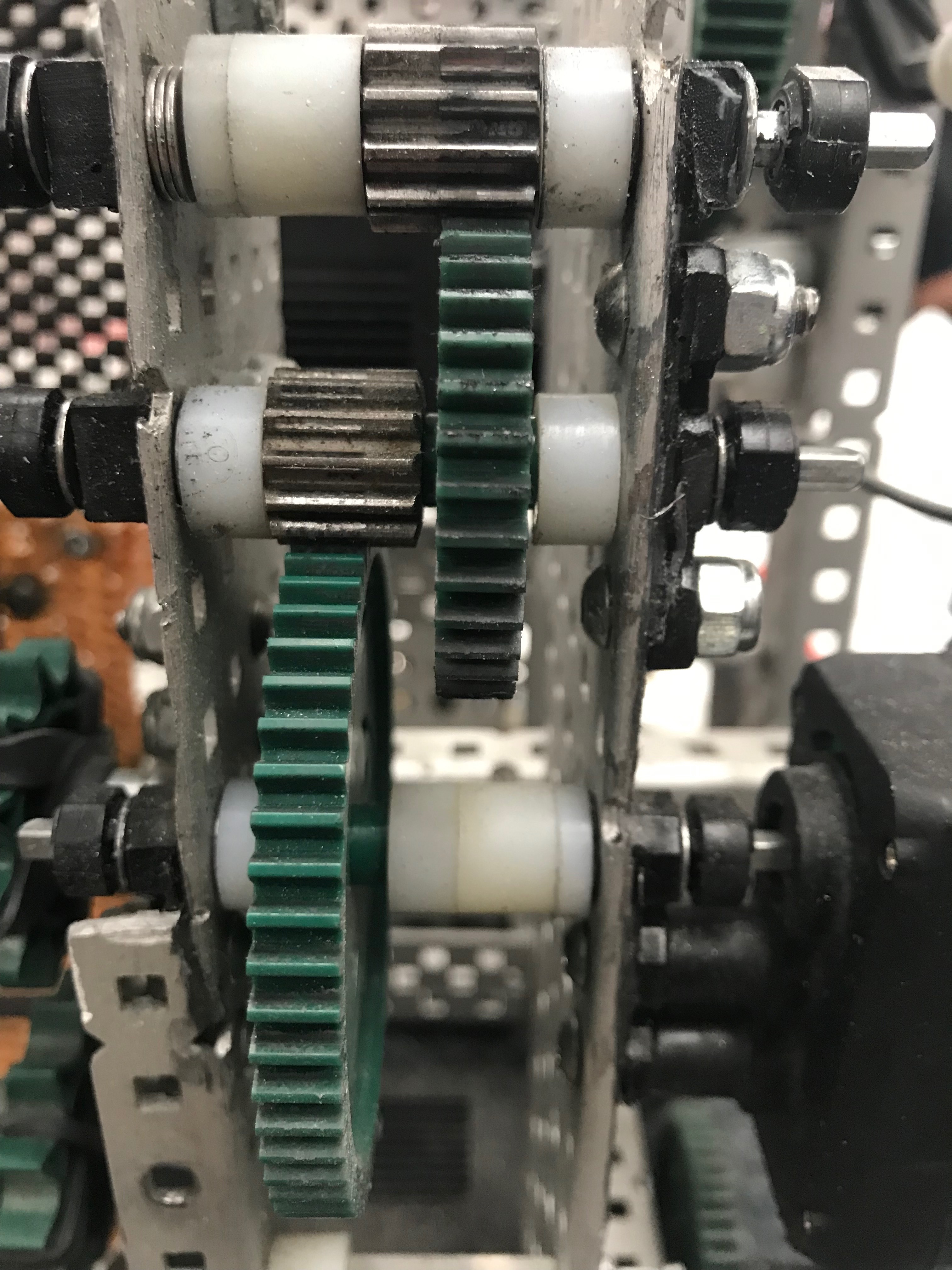 I’m gonna clarify the issue, the flywheel works fine, the problem is that the vibrations from the flywheel causes a motor on the drive train to loosen. I know that it is caused by the flywheel because when I don’t run the flywheel, the motor doesn’t loosen, but 1-2 minutes after the flywheel is on, the motor loosens a lot. I have to re tighten the motor every couple of minutes or after every match which is annoying and messes with the driving and autonomous.

use nylocks nuts for every screw on the robot and use zip ties on the motors to prevent them from coming off.

Zip ties might work, there are nylocks on every screw on the robot. The only thing that comes loose on the robot are standoffs and that one motor. I think I’ll use rubber links to absorb some of the vibrations and zipties to hold the motor in place even if the screw comes loose. Any other comments are helpful. Thanks!

Your flywheel shaft appears to have a fair bit of space between the bearing and the wheels. I suspect that the shaft might be very slightly bent due to the lack of support over this distance. If the shaft were bent, it would cause rotational imbalance, which leads to vibrations. Depending on how easy it is, I’d check it out to ensure that it’s straight by holding it up to something flat and checking all 4 sides.

You could also try swapping out the 4" wheels to different ones, as some of them just seem to vibrate more due to slight imbalances.

You mentioned that the motor coming loose is mounted on a pillow bearing, I’d recommend mounting it directly onto metal instead. This will allow you to tighten it harder, and allow you to use Loctite if you’re concerned about plastic reacting.

I think you might be right about the bent axel but I haven’t noticed because of the spacers on the it. I think it’s way too late into the season to redesign this support flaw. I will definitely be replacing the axel before the regional championship next week. The wheels do have some wiggle room because the holes in them aren’t the exact shape of the axel which might cause vibrations. Thanks for the insight! I think this may be one of the issues.

I would agree its likely a bent axle. It looks like you could fairly easily replace your flywheel axle with a high strength axle. Just know you really have to have perfect alignment of the HS bearing flats to limit friction. It would be wise to also use grease on the bearing flats and on the gears in your 15:1 system. If you can beg borrow or steal 600rpm cartridges, 5:1 is easier to get low friction.

What would grease between gears do? I put white lithium grease on the axels and bearings but I never thought between the gears. I assumed that would cause slippage. I also tried asking just about every team in the area if they’d be willing to sell turbo cartridges and even on the forums and no one is willing to. They are willing to trade for other ones but I don’t have any cartridges in general sadly. How would you put a high strength axel through the holes in the c channel? I’ve never tried it but I assume they are too big for them.

There is significant friction in gears meshing. They wont slip if you grease them, and you will be surprised by the friction reduction. You have to drill out a hole in structural members that you want to put a HS axle through. Bummer on the speed cartridges.

Won’t be able to swap the axel for a high strength one sadly, there is too much involved and risk that we ruin what we have going. I’ll definitely grease the gears though. White lithium grease works on gears right?

Yes. White lithium grease works. What the problem with weight is that one part of the wheel may be heavier than the other.

I cannot let it go. Wish I could. The red line below your text all this while is because the word is a x l e. English is a cruel language with fuzzy rules. Not trying to be mean, hope this helps.

Lolllll, thanks. I’m more of a math guy anyways.

If I remember correctly, the VEX bearing blocks are made of Acetel which should not react with threadlock (full disclaimer: this is off my memory, which isn’t 100% accurate)

Something you can try is mounting a nylock on the same screws as the motor.
What you’ll want to do is mount the screws with nylocks, back out a few turns so the screw spins freely, mount the motor, and tighten the nylock once the motor is on. This forces the screw in place.

Another thing is to try locking washers. (They are allowed under R7 C)