After a long period of development, the VirtualVEX Development Team and Team 254 are happy to announce the release of the Beta version of VirtualVEX 2013. This is a monumental release for us which includes a set of major new features, as well as the first significant restructuring of the underlying code.

The biggest new feature that should be of interest to VRC teams is the newly-developed Waypoint system. This system allows users to create paths by laying down waypoints, providing an excellent tool for planning Robot Skills routines. Waypoints can be added in Strategic View (another new feature), which provides a top-down view of the field (this feature is accessible through the View menu on the menubar). When you return to normal view, a visual cue marks the next waypoint on the map, which is useful for going through a new Skills routine for the first time.
[ATTACH]7223[/ATTACH]
[ATTACH]7224[/ATTACH]

We have also added a new robot for Sack Attack: the Roller Bot. This represent a robot with the increasingly popular top-roller intake design.

This release also introduces a number of graphics changes. Objects on the field (including the robot) now cast shadows, making it easier to orient yourself when driving. The goals are now partially transparent, matching their appearance in real life. Finally, we have introduced a new, minimalistic user interface design.

VirtualVEX is available for Windows and Linux. Starting with this release, we are offering separate 64-bit and 32-bit versions for Windows. The 64-bit version is recommended unless you do not have access to a 64-bit operating system. The Linux binaries are available for 64-bit only.

This beta largely represents what VirtualVEX 2013 will look like when it is finished. We have implemented the major changes we wanted to add, and our work between now and final release will mostly be bugfixing and optimization, and possibly more robot designs. We are aiming for a final release in March.

For more information on the changes we have implemented, read the blog post.

VirtualVEX 2013 Beta can be downloaded from here: https://sites.google.com/site/virtualvex/downloads. Be sure to try it out and give us any suggestions or feedback! 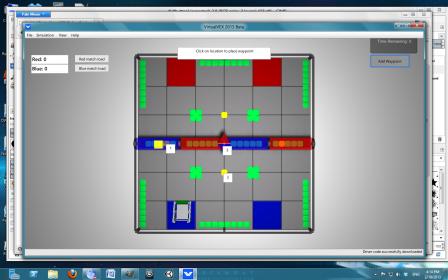 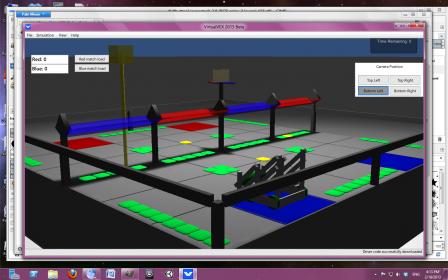