Hey everyone. I realize this project has appeared dead for the past few months, but let me assure you it is very much alive, just slow due to schoolwork. The good news is that I’ve finally gotten around to making a project page on GitHub for VirtualVEX. This provides a great hub for the project and will serve as a progress tracker. Also, if you have a GitHub account, the project page is a great way to provide feedback and locate bugs for us to squash. Finally, since the latest sources are always updated on the GitHub page, you can get and run prerelease versions of the simulator, if you are willing to build from source (remember that since the program is built in Unity, you must have Unity to compile it). The link is:
https://github.com/jchang-bcp/VirtualVEX

The other news is that we are nearing a new Alpha release. See the screenshots below to see what we have been working on.

Finally, with World’s about a month away, we’d like to get to a final 1.0 release as soon as possible. Thus, this will probably be the last or second to last alpha release before a beta cycle starts. Then, when the new game and season are announced after World’s we will start developing a 2.0…but let’s not get too far ahead.

See you all at the next release! 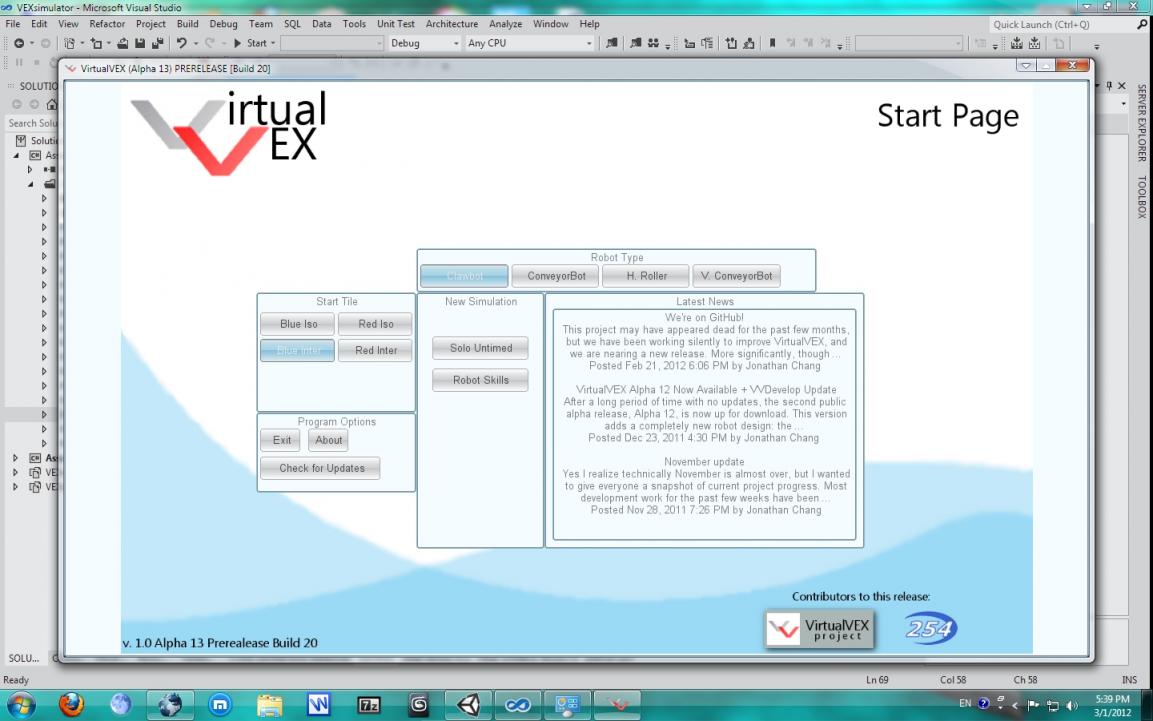 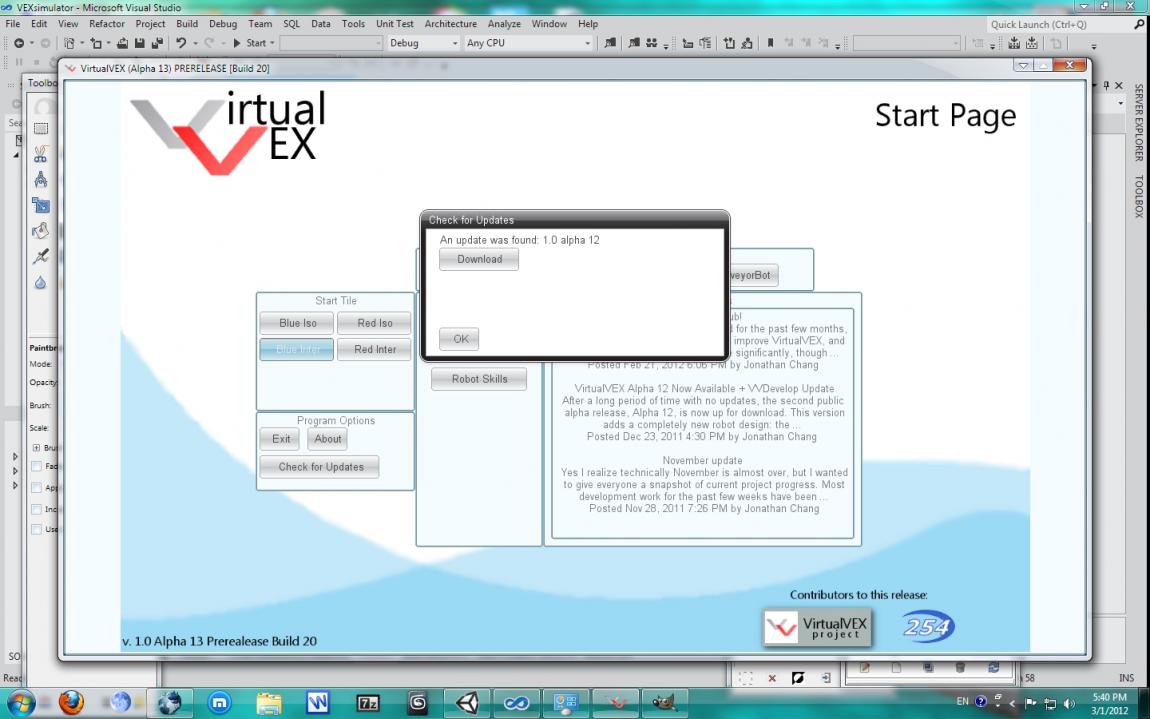 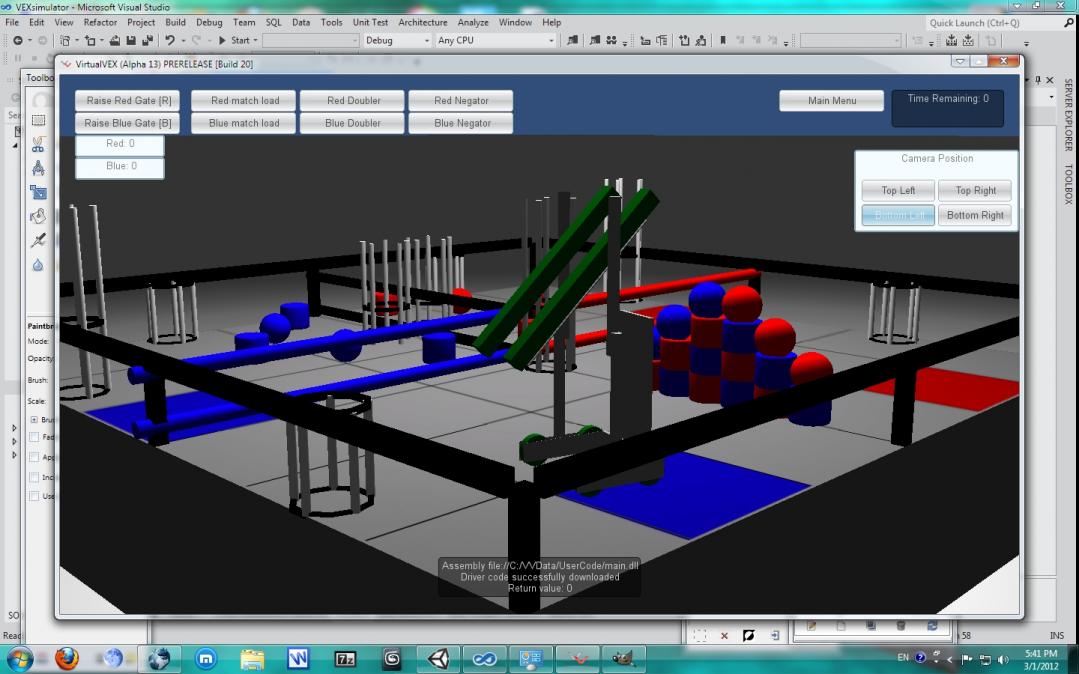 Wow, looks really cool! Thanks for putting all this effort in it!

Are you going to have a Vertical Intake bot?
Just wondering.

Yes, we will be trying to get a vertical intake bot in by the beta at latest.

That will be cool.

Thanks for all the work you have put into this

Do you know a guesstimated time when the next release will be out?

Of course, release dates are subject to how much work I and the team have from school and other non-simulator related VEX stuff over the week. But we are trying to wrap up changes and get it out soon, anytime in the next two weeks. Like any piece of software, it will be released “when it is ready”

Another question. Will there be a feature that will let people play matches online against other players? I think that would be cool to add in the future.

Hm, well we definitely won’t have time to implement networking for this season…but over the summer I may be able to look into it. I have never written any kind of networking code before, so it would be something new I’d have to learn. However, Unity does provide easy networking tools (or so they say), so it may yet be possible. But again, just as a heads up, the earliest any kind of networking feature could be available would be next season.

Sorry if you needed that or were hoping for it this season…but we’ll do our best!

As promised, the latest alpha release of VirtualVEX, Alpha 13, is now up for download. This release includes all the changes seen in the original post, plus some new features, including UI customization and a console you can use to enter special text commands. A full list of changes is, as always, available in the readme. With this release, we plan to exit the alpha stage and have a beta out in the coming weeks. The beta will be most likely similar to Alpha 13, but with a few changes, including possibly a new robot. We are aiming for a final 1.0 release before World’s.

See you at the Beta release!

You are able to control the robot. VirtualVEX is intended for use with joysticks (since these are the most similar to real VEX controllers), but if you do not have any joysticks you can choose to use the keyboard…see the website for specific key controls. Please be aware, however, that the keyboard layout is designed to roughly mimic a real VEX joystick, and as such may be somewhat awkward to use. Again, the recommended use of the program is with joysticks, as you lose a lot of realism using the keyboard.

I usually use the following for driving around.

That is personally my favorite setup for using VirtualVEX.

I just downloaded this yesterday, it is SO COOL!!! Great job! I love how physics is really applied so well.

As for the controls, another Free Range member and I were playing about with the controls and we (kinda) made an arcade control setup. I like how the controls are flexible and easy to change.

If your programmer is willing, you can ask him/her to write a driver control program with arcade setup, since the simulator is capable of loading user-written ROBOTC code. There are specific instructions in the Documentation section of the website. I think this would be an easier and more accurate way to customize the controls.

Wierd, both Google Chrome and Norton are flagging the installer with WS.Reputation.1 (http://bit.ly/GHy8Zh). Do you know why?

According to that link, the WS.Reputation.1 flag is based on user feedback; i.e. if not a lot of people mark it as safe, then it will not be marked as safe. Obviously, this file is not downloaded a lot, so there are not a lot of positive marks, so security software will tend to err on the side of caution. I can assure you that downloading and installing the program will not break your computer.

If your programmer is willing, you can ask him/her to write a driver control program with arcade setup, since the simulator is capable of loading user-written ROBOTC code. There are specific instructions in the Documentation section of the website. I think this would be an easier and more accurate way to customize the controls.

OK, I will write up some ROBOTC code for it soon and try that instead.

This shouldn’t really be a problem, but keep in mind that the program does not have full ROBOTC support, only enough for writing driver control. Since that’s all you’re doing, you should be fine. But you will have to read the documentation on the website since there are specific steps you need to take to download user code…basically, you have to use the preexisting template and compile your code to a DLL file. Again, more details can be found here: