Hello everyone,
Can you guys suggest me any good and compatible voice recognition module for vex? and what you guys think of tactile sensors? i am greatly impressed with the tactile sensor that nao robot uses. But have no idea where to get or construct one of my own. Any ideas? thanks

…
Can you guys suggest me any good and compatible voice recognition module for vex? …

If somebody can suggest a good voice recognition module for vex, I’d like to buy a few and hook them up to my kids so they will recognize when I’m talking to them.

…
…what you guys think of tactile sensors? …

I think the closest thing Vex has to that would be the bumper switch or the limit switch, or perhaps the line followers if you don’t necessarily need to make actual contact.

I don’t know what the Nao uses but if you’re interested in making something that is not legal for a Vex Competition, you could search a place like Digikey for tactile switches.

When arduino can work with “Easy VR shield” for voice recognition,why cant vex work with? I thought vex is more powerful. is there no way to hook standard voice recognition modules to vex? I am not looking for competition but just to add some extra features to a robot

When arduino can work with “Easy VR shield” for voice recognition,why cant vex work with? …

It looks like the Easy VR shield works via UART, so perhaps it’s possible. One of the more electronically-oriented people on the forum will need to answer that question. I did not mean to suggest that I know that voice recognition devices will not work with the Cortex. Sorry if I caused you some confusion/anxiety/temporary heartbreak.

It looks like the Easy VR shield works via UART, so perhaps it’s possible. One of the more electronically-oriented people on the forum will need to answer that question. I did not mean to suggest that I know that voice recognition devices will not work with the Cortex. Sorry if I caused you some confusion/anxiety/temporary heartbreak.

Really thankfull for all the pains you gave and then the relieves you gave. :p:p

How tough of voice recognition do you need? Looking at specific sound patterns for simple things is much easier than full on speech recognition.

Nuance is the one we for use at work for customer service IVR’s. They own Dragon as well.

Speech rec takes a bit of memory to work the algorithms. More than would be on the Cortex.

But what you could do is hook up some speech recognition on a second device (PC, phone, etc) that has the speech rec software and a microphone that then gets you to the command you want to send over to the robot. You then need to send that command to the Cortex to do what you want it to do. Get the speech commands translated into the smaller set of things you can have the robot do.

The communication to the Cortex can be via the UART serial port to some wireless transmitter like an XBee on an Arduino shield. That hooks into the PC that is sending the commands to the robot. If you can do that from a phone to an Xbee that is ground I don;t think has been paved yet.

Ooo! They look like they run on a Raspberry PI. That can be hooked to the UART a bit easier.
http://cmusphinx.sourceforge.net/wiki/raspberrypi

Not sure if they have Scottish on their platform yet. This video poking fun of speech rec is a classic!
https://www.youtube.com/watch?v=5FFRoYhTJQQ

The sensors on Nao’s hands and head are capacitive touch sensors, very similar to the touch LED used for VEX IQ. You may be able to use the I2C on the Cortex to communicate with the IQ sensors if you know what you are doing.
The ones on the front of the feet are just bumper switches.

Thanks for the explanation team 80. I never thought about using pc. That will really help me.

Calv i doubt if touch leds will work and will be as sensitive as capacitive touch leds.But still ill give a shot. Thanks for your time aswell

Check out Sparkfun. They have some sensors that may work out for you from a pressure / bending side.

Speech recognition is hard. Short commands like “Left”, “Right”, “Up”, Down" can be done pretty well. This board does that. You could take the outputs from it and feed into your Cortex and program it. (When Pin 1 is high, someone said Left). Just make sure you do something with STOP!!!

At one of the Penn State Abbington Firefight contests, one of the VEX people had a robot that moved on someone yelling “Fire FIRE FIRE!!!” But all they did was take a microphone input into an analog port and when the level got above ambient levels the robot moved. So voice control at a low level. So you could do that and just yell “WIN WIN WIN” and have your routine start. 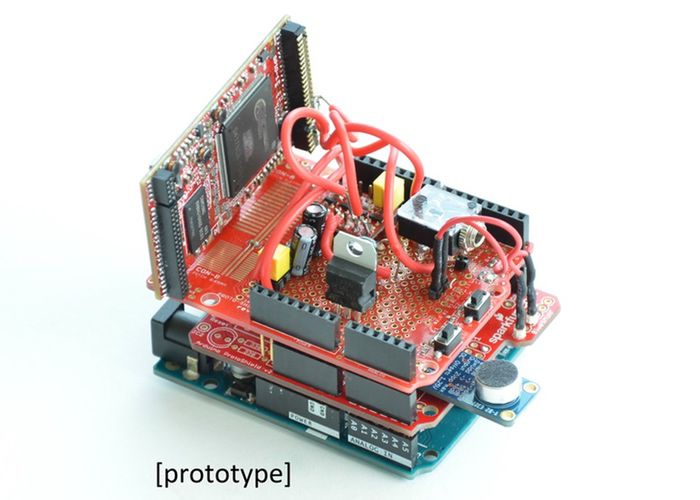 Since you are a college team you should be able to hook it in via uart. Send serial data to the cortex to command it to do some activity.

Seems like quite a brick to carry about on the robot.

So I followed your links to the Movi Kickstarter to find that it’s $80 :eek:

To go back to your prior post, the Movi has an Allwinner A13 chip on it, it’s A8 core that is 32 bits and quite a bit faster than the M3 Cortex that we have in our controllers. I have a device that has the A13 chip on it, it’s slightly more powerful than a Raspberry Pi. (*) I did a head shake, a voice unit running at 100 Mips driving a microcontroller running at about 3 Mips.

I was amused by the voice activated “Hunt the Wumpus” game. (Hunt the Wumpus is a game that was popular with us nerds in the 1970’s. It was written in that ancient language, “Basic” )

Not sure what is in that huge stack of boards they have, the Mobi board looks like just a single shield. But it has good specs and the training would let you prefix commands by saying “Robot” first. Not sure if it would be responsive enough for the OP to drive it. “Robot Turn Left” will take some time.

I can see the programming making the voice recognition program and it could be somewhat simple if you want to do it on your own, speak your command and have the program record the vibrations into an array. But how would you store that array for later? I’ve ran into that storage problem a lot lately…:mad: