I’ve decided to make available my season data analysis. Data are pulled from RobotEvents, the plan is to do so weekly, though during this initial phase, it may be more frequent as I find and fix bugs.

The data from RobotEvents for League events, seems “unreliable”. I’ve not yet opened a ticket with them, but I suspect there’s something going on with Tournament Manager and League events that span multiple weeks. For example: https://www.robotevents.com/robot-competitions/vex-robotics-competition/RE-VRC-20-2751.html#results shows a total (as of 2/28/2021) of 22 matches, while Win/Loss records indicate many of the 18 teams have played 20 matches. [EDIT: It looks like only the most recent matches report, but the W/L/T/AP are correct]

The main feature is that it displays the results of Microsoft’s “True Skills” algorithm. This is what they use to match players in games like Halo, and serves as a more general purpose ELO ranking system, in that it works for team-based games. True Skill assumes an individual’s performance is based on a normal distribution of their “skill”. One can use participant’s True Skill to come up with a probability of a match between participants. I’ve added a tab that allows one to enter a 2v2 and see who is favored, and by how much.

Because RobotEvents does not have tournament results for Live Remote Tournaments, it is not possible to analyze these competitions.

There is also an analysis of the Elimination rounds for in-person tournaments.

I’ve done some basic analysis on Skills for the year, as well. This includes any Skills score published to RobotEvents, so In-Person, Live Remote, and Recorded runs are included.

[EDIT: For those interested (Discord Bot authors, App creators), there is a REST API for the Prediction function]

Nice. Puts my simple Excel sheet to shame.
In prior years with more data on RobotEvents, I would pull down the VEX IQ Middle School data for the NH/VT tournaments. With a pivot table and a slicer, I could quickly plot my teams growth through the season for the school board or show my team captain how well another team performs.

im in that unreliable event example

all things aside this is pretty cool

I’m not sure if the match predictor is working. This could totally be an error on my end, but after inputting the teams in the four spots indicated and clicking predict match nothing on the graph seems to change.

im in that unreliable event example

How many matches in the League did you actually compete in? Is your W/L/T accurate, or is the match-list accurate?

I’m not sure if the match predictor is working. This could totally be an error on my end, but after inputting the teams in the four spots indicated and clicking predict match nothing on the graph seems to change.

What are you inputting?

Edit: Nevermind on the input - I found/fixed that bug

Is your W/L/T accurate, or is the match-list accurate?

Based on my previous experience with leagues (which was a couple years ago now), my guess would be that the Rankings and W/L/T record are accurate for the entire league (i.e., all matches across all meetings to date), but the match list shows only the matches for the most recent meeting.

For that event in particular, the match list shows 5 matches per team, so the rankings showing 20 matches per team would be consistent with the 4 meetings that have taken place to date.

The W/L/T is cumulative from every time we competed at the league. We’ve had four league nights in which we’ve competed, so the W/L/T, WP, AP, SP is all over four 5 to 6-match meetings.

Thanks; that seems to jibe with @holbrook. So it sounds like the W/L/T is accurate, but not all your matches are listed towards the left - those appear to only be the most recent matches (e.g. matches from prior sessions/weeks do not appear) 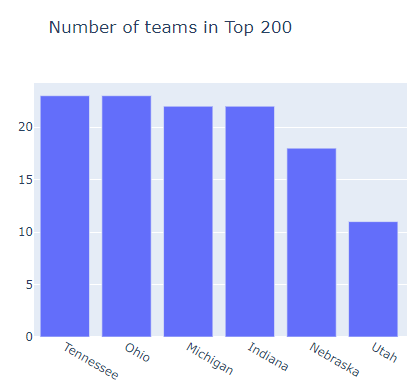 I really love the home row win points per match statistic. You can really see who has consistent autonomous programs. This seems like it can be a much better indicator than average ap.

When you dont even see you’re state ( NY )

One can filter the Rankings: 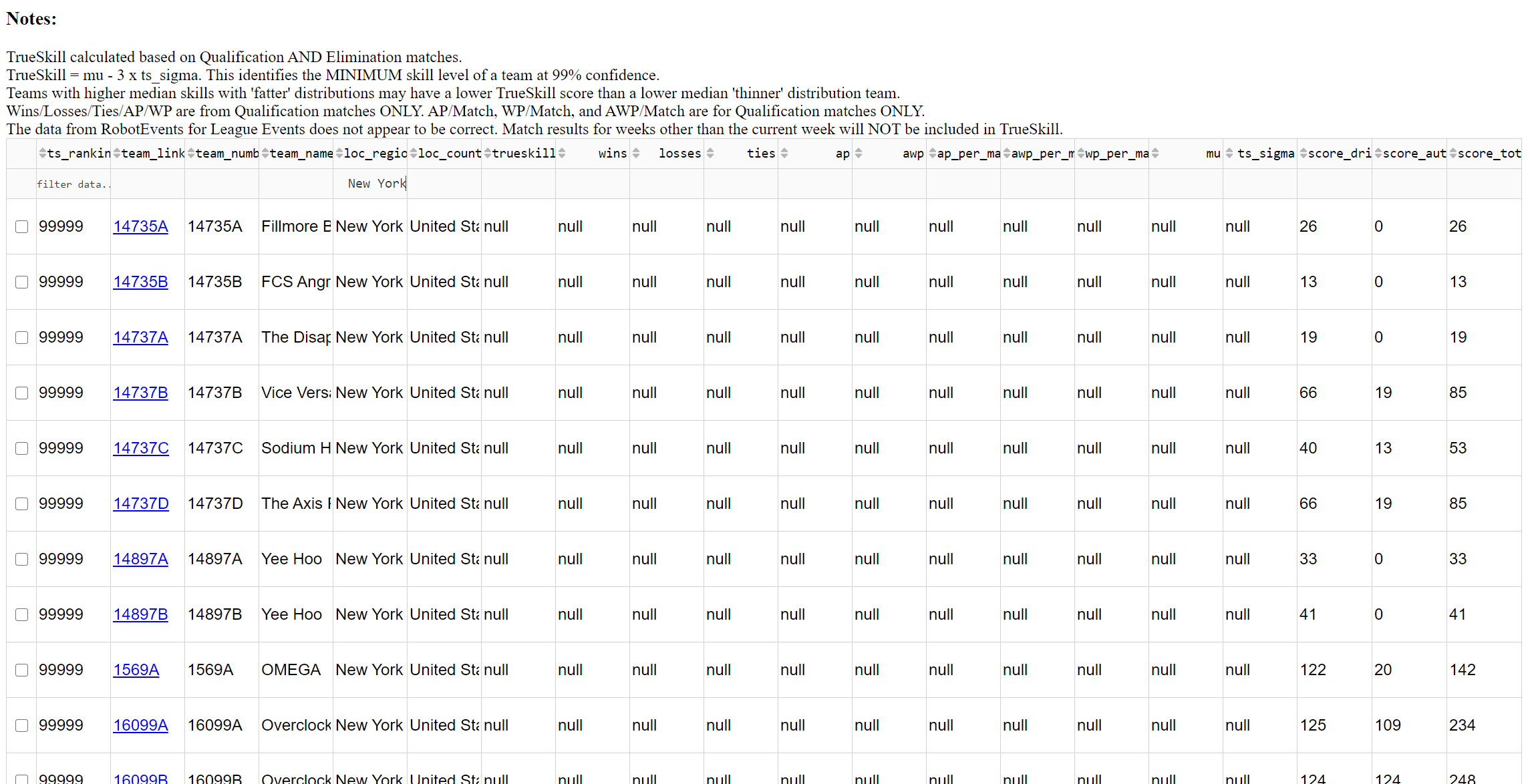 It looks like NY teams have not yet competed in any Live In-Person Tournaments that have reported to Robot Events yet.

Most of them were canceled

I really love the home row win points per match statistic. You can really see who has consistent autonomous programs. This seems like it can be a much better indicator than average ap.

Now with the ability to explore this via a scatter-plot:

Great website! I could definitely see myself implementing some of the data in my team’s scouting sheet. My only gripe is that there is no built in option to search for an individual team (making it hard to use in an iPad).
Edit: It appears that you can use the boxes above sandwiched between the data and the column headers to sort the teams.

I’ve added a few more metrics/rankings. Load time should be faster too