VRC hub now works YAY (for me kinda). Now I don’t know when this started working but I have come across a few interesting (and funny) ways to screw with the inputs of the app. Due to the way that the app is “broken” in accordance to the rules of the game and the physical realm it could possibly cause confusion.

As you can see we have 7 Elevated Mogos and far more worrisome we have 72 rings scored on the high branchs. As one might have guessed this might not be possible for a number of physical and legality issues.

First I would like to challenge the vex community to score 72 rings on the high branch. With that aside

Why does the app allow for 7 mogos to be balanced or in the home zone. There is a clear scoring rule that says:

This rule clearly stats that what we just imputed into the app is not legal that can cause confusion. The reason why this is likely here is that it is legal in skills, while this does make logical sense it believe it can and will cause confusion. OFC I have 2 robots balanced as well so it can’t be a skills run.

Other issues include that it doesn’t have the game manual update for today and along with that the auton gives 20 points and not the new 6 points.

Overall some of these issues have a logical reason to exist but because of the mixing between skills and matches it can be incredibly confusing. As for the ones that just don’t make any sense like 72 rings being scored on the high branch… how?

LOL I did the same. I would hope the app developers can fix that.

Good thing that during Events, Tournament Manager is the one that controls the scores, not the app.

At least it finally works. Only had to wait 3ish months lol.

Imo it makes perfect sense that the app developers would not try to limit how many of x can be scored somewhere. Say a loophole or edgecase comes out during a match that allows for 20 rings to be scored on the high branch, if the developers had limited the scoring, then it would be the app devs deciding what happens in that case, not the game rules.

Say they made an app for gateway and limited the number of game objects that could go in each tube (?) and then it turns out that there is a loophole in the rules which allows you to mass scored on the lowest tower. Now say a certain @ murdomeek designs a robot to score that way, but the app doesn’t let the refs score it as the rules say, instead limiting them. That would be a big issue for the event, since the game rules are now not being determined by the game manual, but by the silly little app they made to score it.

tldr: don’t worry about it. Just follow the rules when scoring.

OFC I have 2 robots balanced as well so it can’t be a skills run.

Now say a certain @ murdomeek designs a robot to score that way, but the app doesn’t let the refs score it as the rules say, instead limiting them.

Aka 4+ ball goals in Change Up LRT early season.

As for just removing limits entirely, I think that in a public use app it’s better to have them for the sake of being educational, and leave the unlimited scoring for tournament manager. When making vexscoring.app one of the more frequent complaints and bugs reports were regarding unrealistic amounts of rings on the goals.

Having limits on scoring does require constant vigilance and communication with the community to make sure they aren’t too restrictive, so I think I agree with VRC Hub’s choice to not have a smaller limit.

Is it just me or did it stop working on iOS again?

I think it is just you 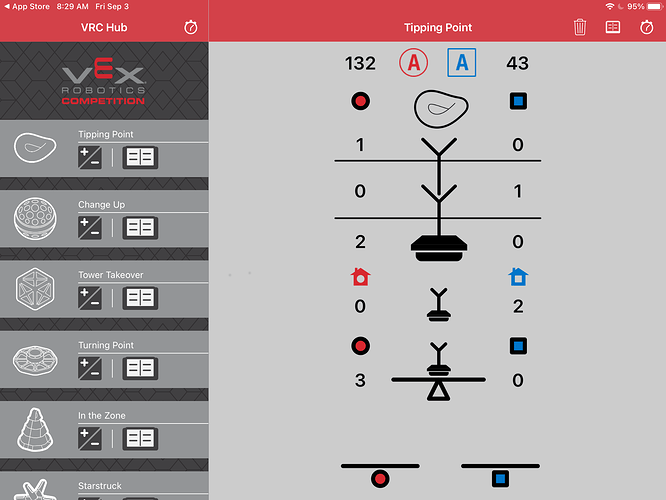