I started this thread to see the weird things your sister teams do. For example, one of our sister team constantly rebuilds their robots. One time, they even rebuilt their robot the week before state.

One of our sister teams built a Double Reverse 6 Bar for Tower Takeover. They worked on it for all year… and it didn’t really work, all year.

our sister team constantly steals our tools from our work area

Among other things, build terrible change up robots, decide to start building battlebots, don’t dismantle their cu robots so they have all the stuff for battlebots… and then complain that they don’t have enough starnuts

Not my sister team, but one of our friends went against sister teams in eliminations. The sister team tried to entangle them and break their battery. Thankfully, they were disqualified under 4 rule violations

Can relate, one of my sister teams does that. However, that strategy has actually served them well, as they are currently rank 20 in the world for VRC high school skills.

our sister team constantly steals our tools from our work area

Unfortunately, I classify my team as the sister team that steals from others, solely because of my actions. I don’t steal tools, but instead I steal parts, and occasionally, if I’m feeling risky, I’ll steal electronics (usually Cortex products that they find useless). However, I only do this if they have a large surplus of parts. I wouldn’t be so rude as to steal from a sister team that hardly has any parts.

You know what they say, one man’s trash is another man’s treasure.

During tower takeover, we built multiple clamp prototypes to see which one grab the cubes the best. We picked the best one and left the others in our bin. The next day, our sister team comes in with one of the other clamps attached to their robot.

I figured I should share this tale
Yesterday our coach was talking to us about the procedure for states tomorrow. We have a time slot from 1:00-3:30, plenty of time for 2 teams to get in all their skills runs. My sister team hasn’t even turned on their robot in a month, which is basically degenerate holecount of the one kepler electronics made, and they haven’t made any improvements since December. Despite this, one of their team members said to me that they’re gonna go first tomorrow because “you take too long”. This was referring to our other prerecorded skills competition where I recorded 3 runs (1 autonomous and 2 driver) and they didn’t have enough time left in the class to record theirs.

I didn’t realize that taking the time to record 3 skills runs was so long it turned their amazing plans into a 28 in skills. I guess I am truly bottlenecking them

Please tell me this was an auton and not a driver or combined.

How on earth did you sister team get into state with a 28 in skills.

If there is a lack in competitors, and not many spots filled in via awards (from in-state competitions), then more teams will get pulled in from the robot skills list sir that particular region. Thus more teams with bad skills scores get qualified for states (that’s how a clawbot/crunchbot qualified for my region’s regional championship).

I know how the system works I am just shocked the bar was that low. The worst team to get into our state event was a 59 in skills.

Our sister team likes to take our robot’s decorations.
For example, if you look at the image of my team’s robot (see below), you would notice the yellow-and-black hazmat decoration that one of my teammates spent hours working on it. Anyway, our sister team stole that decoration, but the funny part is that they steal our decorations, but they don’t have a working robot 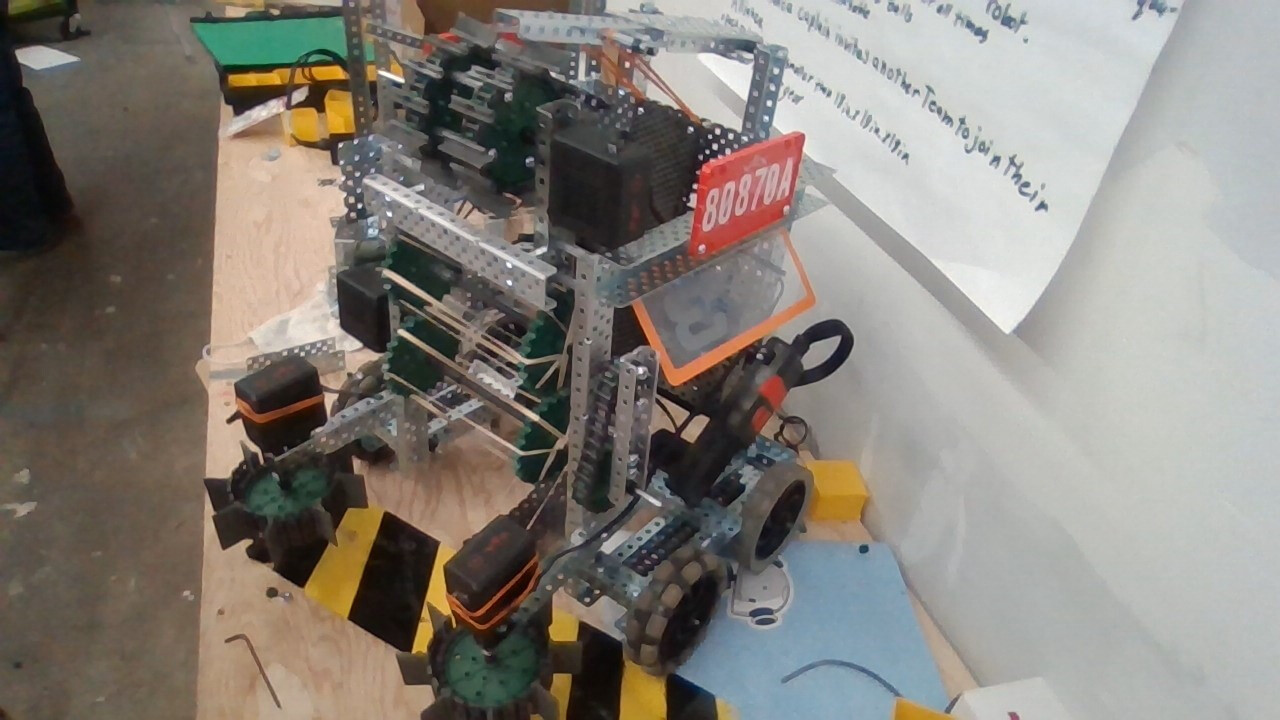