What are the rules for keeping the setting helper on field wall?

Please advise if it ok to keep the adjuster on the side wall or need to be removed before starting the autonomous drive for vexiq elementary team. 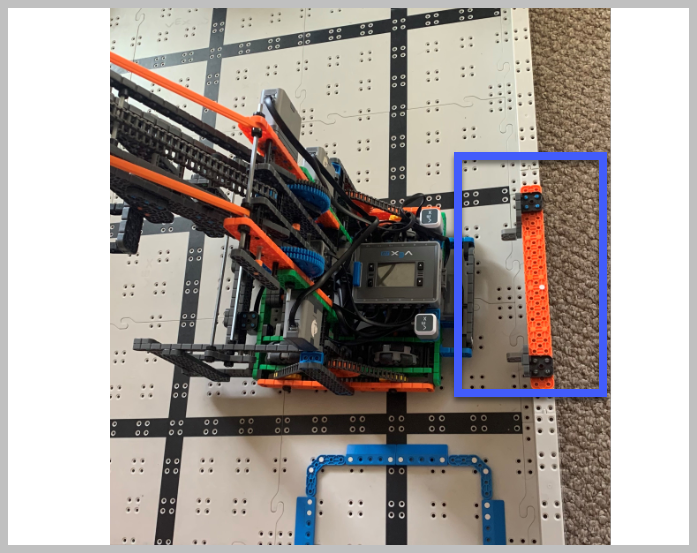 Take a look at rule g12 in the game manual. Robots can not leave mechanisms on the field during the match, and a setup jig would be considered a mechanism. There’s no problem using it for setup, you just have to take it away when you’re done with setting up.

Please advise if it ok to keep the adjuster on the side wall or need to be removed before starting the autonomous drive for vexiq elementary team.

They ruled a couple of years ago that this could be used and could be used during the match. This is not official for this season but it’s guidance.

a setup jig would be considered a mechanism

I would disagree that it’s a detachable mechanism because it’s not part of the robot and would not be there during inspection.

Of course, responses on this forum are not official and you should turn to the official Q&A. Because it is closed, you can (normally) ask at the driver’s meeting at WORLDS.

There’s no question about the use of a setup tool before or during the match, but the OP’s question was if it could be left attached to the field wall as shown in the picture, which would be “no” you can’t attach something to the field during a match.

Sorry, trying to apply < G3 > in these situations is tricky for me. I think it’s something in my brain that I have trouble with that most of the coaches I work with don’t think anything of it. I don’t think < G12 > applies because it’s not part of the robot.

I do have trouble reconciling these two statements with the rules as written:

I do also recognize that there is a “special time” during these resets that starts the moment you touch the bot and ends when they start the robot moving again. They don’t really formally define this, but I guess it’s this special time that allows the kids to use the tool again.

I also understand that they don’t want to write 100 page manual, and I don’t want them to either. Parsing apart all of these things properly would require that.

Hi All, I have asked support@robotevents.com for clarity. Thanks all for sharing their inputs here.

I believe the Q&A is closed with the world’s update released.

This is a common question each season. Yes you can use it, even for setting up a second or third position each run. It is generally expected to be removed before the robot is put back in to motion