What defines "vertical" for the vertical projection of Mobile goals? Scoring underneath mobile goals? 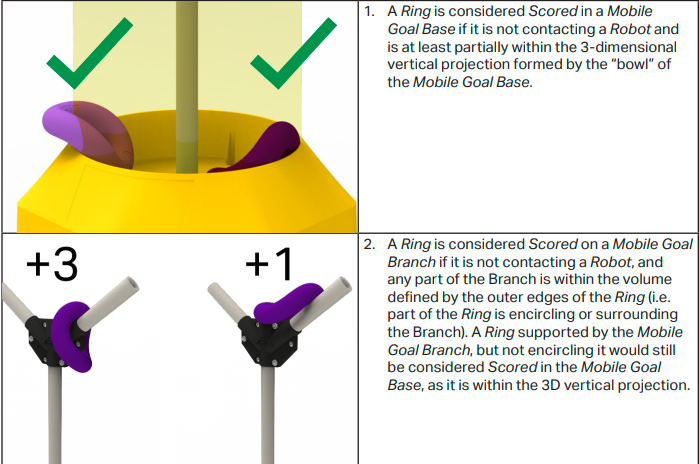 In the above image, in the second diagram, the ring not on a branch is still 1 point because it’s inside the vertical projection. If the mobile goal is slanted and the ring is in the same position (resting in the crotch of the branches), would it still be one point if it’s outside the “true” vertical projection? By the diagram’s definition, it would seem to still be worth one point.

I understand that this question really tries to stretch the word “vertical”, but from the practice matches I’ve seen, rarely are mobile goals ending the match completely flat on the ground, and the branches are rarely in the true vertical space above the base

Good point for clarification. I think we’ll see that the answer is the ‘projection formed by the “bowl” of the Mobile Goal Base’ the way it is illustrated in the figure. It’s vertical in the figure because the goal is standing upright, but it would have to tilt with the bowl for the “+1” example in box 2 to remain scored. With this definition, a ring under the mogo base would not be scored. Also consider that if a Mogo were sitting on top of three rings, we wouldn’t score the three rings it’s sitting on because they aren’t in the “bowl” or it’s projection.

It doesn’t specify that the vertical projection is only upwards either right? So rings underneath the base could count, and if you held two goals on top of each other could you get double points?

Triple points if you can get a ring at the nexus of 3 mogos on their sides!

very interesting question. If we take vertical literally, it would mean a projection of the bowl part of the goal base straight upwards, regardless of the orientation of the goal. And because the manual gives no further clarification, I think the literal definition of vertical is our best bet. Does this projection become elliptical instead of circular if the goal is tilted? I presume yes. anyways, I don’t think it matters too much since it’s incredibly unlikely for a ring to be balance on the top of a tilted goal.

It doesn’t specify that the vertical projection is only upwards either right? So rings underneath the base could count, and if you held two goals on top of each other could you get double points?

I don’t think so because the scoring rules refers to a ring scored in a goal base, not a goal with a ring in it’s base. The difference being that the manual doesn’t care if a ring is scored in multiple goal bases, as long as it’s scored in any, it’s only worth that 1 point.

A ring underneath a goal would probably count though. it meets the definition.

Unless we don’t take vertical literally, and instead we think of it as a projection parallel to the goal post, extending outwards only from the bowl side of the goal. But the manual doesn’t say this, so I don’t think we can interpret it like this.

A ring underneath a goal would probably count though. it meets the definition.

I agree the best bet would be to take the definition literally, and when the goals are tilted, use the elliptical true vertical projection to score rings. But if the goal is tilted because it’s on top of a ring, that ring would be scored as well I believe

would be an interesting use of the definitions for sure. Almost turns the ground under the platform into a floor goal.

just bulldoze a bunch of rings under the platform

besides the 100 points from pushing goals in your home zone you mean?

Sounds like the game manual was written by the people with MBA mindset and not someone with rigorous mathematical definitions as their native language. Where is @Karthik when we need him?

Fine. I guess I’ll take his place if I have to

so by the manual definitions, if a competition is occurring on the exact opposite side of the world as another competition, would the vertical projection of goals from one competition extend through the earth and rings on the correct spots on the field of the other competition technically meet the definition of scored?

extend through the earth

Here’s a really great page: https://www.antipodesmap.com/ According to this, opposite our competitions in Michigan is the ocean, between Australia and South Africa. Watch out for sharks, but no worries on the downward vertical direction rule!

This thread also got me thinking…

What happens if vertical projections overlap? If 2 goals are stacked on top of each other and a ring is in the bowl of the top goal, is the ring scored in both goals for a total of 2 points?

" Use common sense. When reading and applying the various rules in this document, please remember that common sense always applies in the VEX Robotics Competition." would lead to No.

This was answered earlier in this thread. Since the manual defines the ring in the base as scored and not the base itself scoring, then the ring is simply “scored” once since it’s either scored or not scored

Lol. That would be too easy for GDC to disallow. However, the elliptical intersection of the “vertical” projection from the bowl of a goal laying on its side and the floor tiles somewhere in the alliance home zone, provides a very nice landing area for the manual matchloads.

This sounds like a great way to make matches an absolute hell to score. How would you tell which rings are situated in the vertical projection and which rings fall just outside it?