What does a modern VRC chassis / drivetrain look like?

Sup everybody. This is my second year as a mentor for VRC teams, and my first year where I’m seriously involved from the start. The last time I really competed in a VEX based competition, it was still the FIRST sponsored FIRST Tech / VEX Challenge. Since then, there have been a lot of new products and a lot of innovation in the Vex competition universe. While I’ve seen the occasional reveal video and even attended a competition last year, I’m out of the loop quite a bit and have some catching up to do.

As VEX goes on for many years, designs generally converge into some “standard” shapes and layouts. I’m really curious as to what the most common drivetrains, chassises, and arm towers look like these days. This is a good opportunity for you to post pictures of your favorite robots from old arm games, or maybe your current drive chassis, if you want to brag and you feel your design is a pretty good representation of the community standard.

I know this is a lot of questions, but any help would be appreciated while I get up to speed and try to get my teams to be competitive. I have some ideas on how to do all of these but I could use a second (or third, or fourth…) opinion.

A common chassis is a 6 motor U shaped base geared for speed, the advantage of this is you are fast and there is room at the front of the robot for an intake. Send me a msg and I can send you a cad once I get home

I don’t have a huge pool of examples to draw from, but I have seen up close and worked on a few handfuls of bots over the last few years, so I’ll answer to the best of my ability.

Gearing is all dependent on the needs of the game, and how many motors can be allocated to various mechanisms. You can get away with gearing for speed and using fewer motors if pushing between robots is not expected (as is the case with Starstruck). Even two high speed motors work acceptably with 4 inch wheels if you can accept some loss of acceleration and the robot doesn’t have a lot of mass. Lightweight drives offering omnidirectional movement may be desirable for lining up with game pieces. An H or “slide” drive can do this with as few as 3 motors and relatively simple programming (One joystick arcade for forward, reverse, and turning, with a second joystick for side to side movement). See first attachment for a crudely drawn diagram. Different games where robots will need to hold their ground require more motors and/or lower gearing on the drive as well as sturdier construction.

Omni wheels are great, but can give some odd turning behavior if you use them on all corners of the robot. It will rotate closer to the center of mass, which may not the geometric center of the robot. For tank drive, using one pair of grip wheels will force the axis of rotation to a point between the grip wheels, giving more predictable turning behavior. With 4 wheel drives this forces the axis to be between either the front or the rear wheels. A 6 wheel drive with omni wheels on the outside and grip wheels in the middle will turn about the center of the robot for more balanced behavior but at the expense of more mass, complexity, and space requirements.

With C channel, use whatever orientation will provide the strongest attachment. Flat surfaces together are much stronger than the other way around. If you do need to have a gap, fill it with spacers or washers to prevent the clamping force of the bolt from crushing the C channel. (See second attachment for an example of a flat to flat attachment)

Attaching drivetrain halves depends on your needs for space, mass, and stiffness. A simple box chaped chassis is stury, but can make intake mechanisms tricky. As shawman mentioned above, a U shaped chassis (box with the front removed) can simplify intake design. However, this requires reinforcement to avoid the whole robot flexing out of shape. A well engineered lightweight robot can sometimes feel flimsy when picked up but once flat its wheels will hold together without issue. Careful design can strengthen the chassis with the support structure of mechanisms mounted to it, allowing the whole robot to be lighter and simpler, while freeing up more internal volume.

If there’s no convenient surfaces for an arm tower or other vertical structure, then you and your students will need to get creative. Brackets and gussets will be your friend for that job, I can imagine. Generally towers should be attached at more than one location by braces, which can also improve the drivetrain structure as mentioned above. Think about the forces both static and dynamic that will be experienced by the parts and where reinforcement makes the most sense.

Aluminum is not necessary, but very helpful if you can afford it. Lighter bots accelerate better, and lighter mechanisms require less force to lift and operate, allowing them to apply more useful force to manipulate game pieces, or move faster with the same force, or simply use less battery power. Lifts and arms should be aluminum unless they absolutely need the higher strength of steel, as large steel mechanisms can struggle to lift themselves, let alone a game piece. If the bot becomes too top heavy when a lift or arm is extended, programming a “slow mode” and a steady driver can help stability. Adding ballast mass low down on the robot will help stability but will hurt acceleration.

Sorry for the wall of text and the scarcity of visual aids. 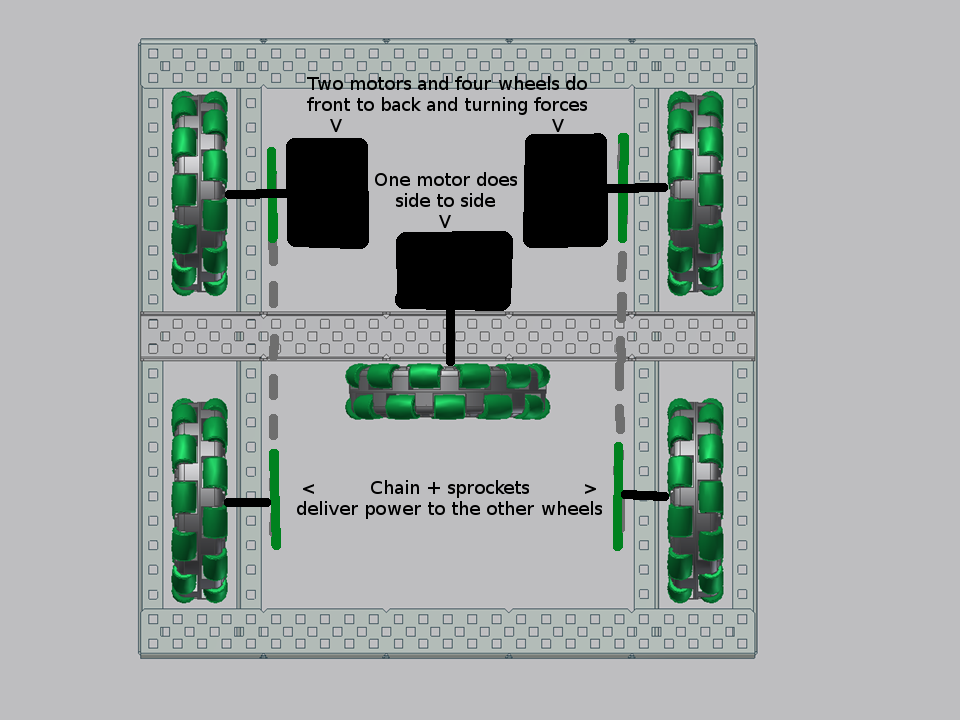 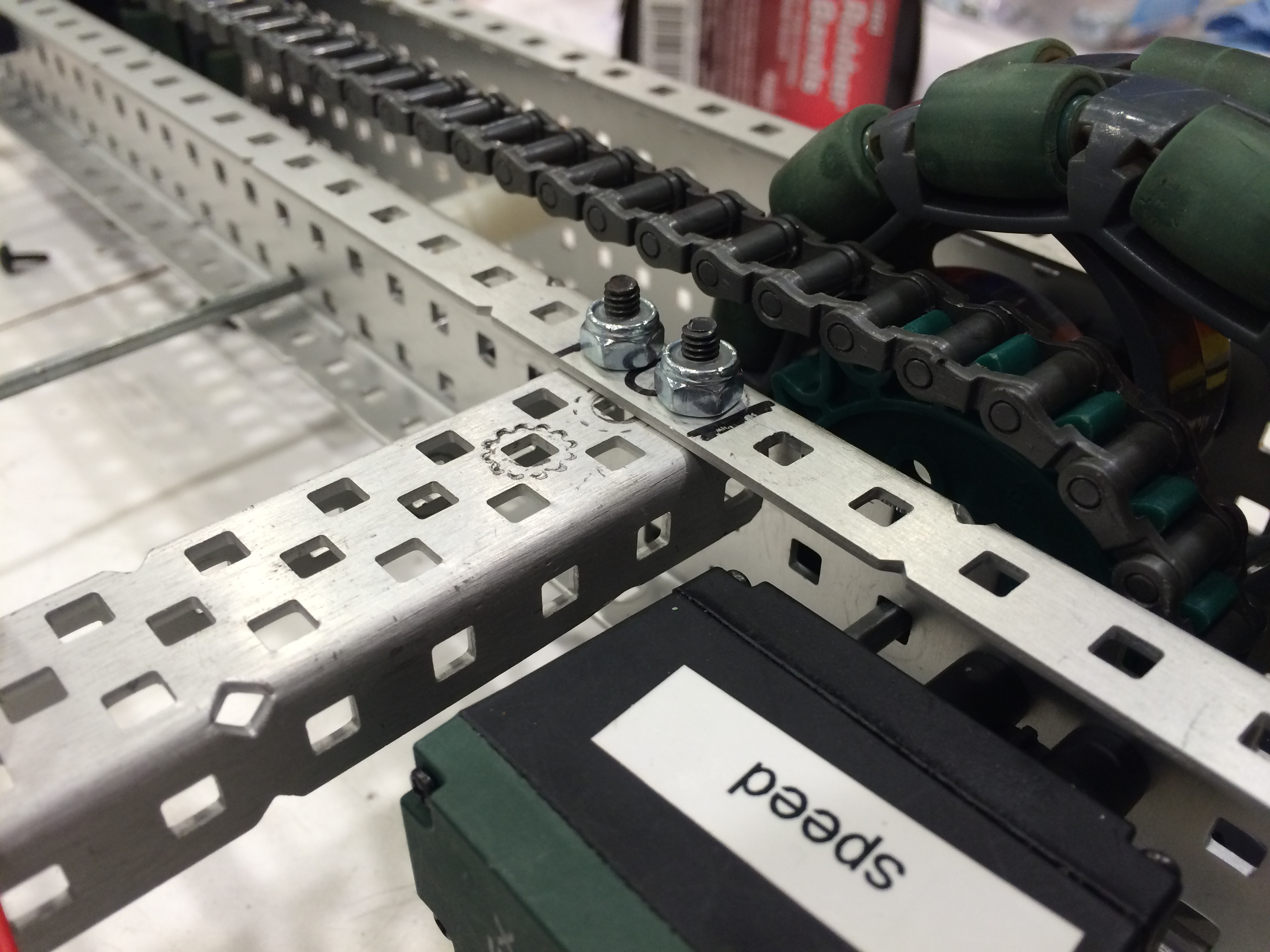 The most common drivetrain is four speed internal motors in direct drive to four 4in omni wheels with two wheels the left and right. This gives you a good platform to build you scoring device on. This type of drivetrain is very simple to build and you can build it very quickly.

The Open Source Starstruck Robot pretty much uses the standard everything.

How many motors on drive / how do you gear? My back of the napkin math seems to suggest with 4" wheels, you can do pretty well with four motors, driving the wheels with the “high speed” (160 RPM) gearing, 1:1. I think this is what my team did last year. Any reason to deviate?

4" Omni Wheels are still the standard, even for tank drives, right? Any advantage to 6 vs 4 wheels?

Yes, or 3.25" wheels with turbo gears also give a very good ratio and are becoming more popular

C-Channel - flanges in or flanges out? A little of both?

Towards the center of the robot, although I think that’s more of a personal preference.

How do you connect your two drive halves together? Back in 2006-2007, you’d use angle pieces bridging all four pieces. I’ve seen different setups recently. How much structure do you really need to connect these?

Again probably personal preference, but I like 2 35-hole pieces of structure, usually an angle and a wide c-channel.

Arm towers - How do you rigidly mount your uprights to the chassis? Particularly if there isn’t a convenient flat surface without flanges to mount those pieces to? Angle pieces again are what come to mind, with some diagonal support.

Everything, except for in very unique circumstances