What Happens if You Don't Pick Up An Award?

I was wondering what happens if your team wins a design award but you leave the competition early because you were eliminated? Is it sent to the school? Or is it given to the judges’ second choice? I’m just curious, as sometimes our team would leave early because of early elimination.

Well, it’s still awarded to you, and that’s what goes onto the official record. The design award, at tournaments large enough, can be used to qualify for state or regionals, so it’s worth staying even after you’re out for elimination matches.

I would encourage teams to stay through awards ceremony. You honor all teams this way and build a reputation for good character.

Also, you can help the event partners clean up after the event, something that is really appreciated as well.

I am still angry at two of my teams for not waiting last year. One was an excellence award. If I remember I will put the picture of the lonely trophy on the stage.

I was so mad I left the trophies with the organizer and made the kids make arrangements to pick it up. If you can’t wait an hour, don’t expect anyone else to pick up the slack for you. 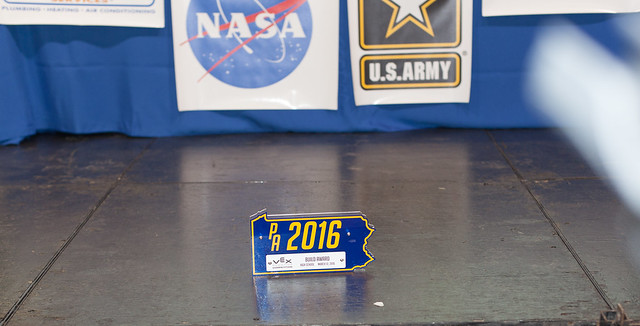 Well, it’s still awarded to you…

At least that’s what’s supposed to happen. There have been several teams at some of our competitions that, if they aren’t there, the event people will give it to the next most qualified team(it’s still a rare occasion but it has happened before)

So to add on to the last couple posts. You should by all means stay, even if you think you have no shot at getting an award.

At our events, we have NEVER given an award to a “second” choice because the winner left early. We do everything we can to get the award in the hands of the team that won the award. That being said, I expect my teams to stay through the awards at any event that we participate in as a sign of respect to the event partner, the other teams and to show support for any of our teams that may win an award.

I would have to agree with what most people have said, try to stay regardless of whether your competing to the end.

On a sort of side note, I was wondering, what happens to the trophy if you don’t pick it up at worlds? Last year, they were handing out the awards in my division while I was kinda in a rush prepping for my next semifinal so I never heard my team being called. Just wondering…

On a sort of side note, I was wondering, what happens to the trophy if you don’t pick it up at worlds? Last year, they were handing out the awards in my division while I was kinda in a rush prepping for my next semifinal so I never heard my team being called. Just wondering…

This has happened before and the REC Foundation made arrangements to get the team their trophy.

We make an effort to get them the award, but agree with @Team80_Giraffes if you are in the running for the top award, hang around. Plus we ALWAYS need help packing up, so the extra 10 mins you and your five team mates and their parents spend loading us up is worth two hours of labor for me.

Fun story, last year my old team was having problems at our regional competition, so we spent much of our time right before alliance selection fixing our robot so we never talked to teams about why they should pick us. Needless to say, we didn’t get picked. My teammates were so disappointed they left despite my protest, so I was the only member of my team there. We ended up wining the Design Award and qualifying to Worlds. I am on a new (better) team now, but I don’t think the members of my old middle school team will miss finals again.