What is the worst match you ever played in vex?

We lost 178 to 2 once in tipping point.
Besides that, probably once during IQ next level when we scored 2 just after scoring like 25 or something.

You ever heard of repressed memory?

Not exactly right for this, but it was in tower takeover, and I was at a league night. I was 7th, against 1st and 2nd. My alliance partner did not show up. I was winning, and then in the last 10 seconds, i headed towards the enemy’s corner, and the momentum of the bot pushed it forward and hit the tower, DQing us from the match. I could have won in a 2v1 against the #1 and #2 alliance. I almost cried. lol 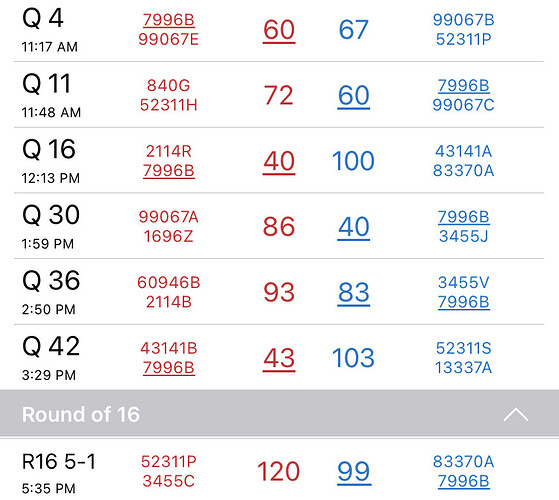 This is the first time this has happened to me in 4 years (we should have won two because of incorrect ruling for the 30 second rule, but the head ref had only been contacted 1 day before the event and read the rules that night)

I remember winning qualifications at state last year, winning 70-0 in the quarterfinals, and then nothing…

I’m not gonna lie but you kinda copied my “What was your best vex game” but it’s ok, also here’s my worst game.

Lol you are right
20 char

Only thing is that my best game would not be quite impressive.

Here’s my best game if you want to see how good of a driver (Xbox player) I am.

Worst match i ever did was a 1 point match in rise above. We were going on our regular route, we had got the first riser in when our teammate slams into us. And they did it on purpose. Like whaaa? Then they keep trying to unplug our cords, and it took us the full minute to get the team to stop. We got a redo, and they got a dq.

best part was that we did the match solo that time, got our best score ever. A solo 172, it was finals, and they didn’t win the tournament.

It was at the turning point world championship. It was our rou d of 16 match. Me and my teammate went for parks. I got high park and my teamate fell. We lost that match by 1 point. There was a cap floating because it was in between the plexiglass of the platform and another peice of the platform. If we has toggled a bottom flag, we win, if my Teamate had 2 more seconds to park. We win. If the cap wasn’t floating it was a rerun. We were extremely disappointed.

In the same match (IQ) we were paired with a Herobot team that had dropped the robot four times and almost drove the robot off the table when we were queuing, a ball pushed the exit button on the brain, taking it out of the program.

Got pinned in the corner at states for half the match next to the opposing platform and got disqualified because I ended the match pinned into the platform.

During the Round of 16 in states, my team’s battery came unplugged right after the goal rush in autonomous. We lost 63-174.

Oops😅didn’t mean to revive a dead thread. My bad.