What is the WORST thing that has happened to your robot during a Live Remote Competition or Regular Competition?

What is the worst thing that has happened to your robot during competition?
I´ll start, my robot fell completely apart while in the middle of a Live Remote Competition.

Autonomous failing. (Which happens most of the time actually.)

Had a piece of metal dragging on the ground in a remote skills comp. Didn’t notice until after the 20 minutes.

We had a remote skills only competition and we got a total of 7 points. 5 points driver and 2 point autonomous. I also dropped the team’s robot about 7 matches before we were supposed to queue last year.

ITZ, battery fell out and unplugged during a finals match, then my partners proceeded to fall out as well.

I was gonna own all the goals in a prerecorded skills, and I thought the center goal was scored at the end of the match (I descored 1 ball and had my ball on top of the other 2, but my intake was still in the goal so the red ball was above the top edge) so I didn’t do another run, but the refs didn’t count it. Now I’m 12th in my state, even though a split second faster would put me in 5th

Center goal came loose during my first practice match and caught the robot. I wish the goal was held in by more than 4 screws and couldn’t just be lifted off the ground sine foam tiles aren’t secured either

Does having me drive it count as a robot’s ultimate misfortune?

Our sister team was set to win their semifinals finals, but after deploying their hood, they white screened and lost horribly.

After losing a 1v2, as is the common occurrence with Live Remote Tournaments, going 2-1 overall, @Got_a_Screw_Loose picked me for the 4th seed (out of 4) going into elims. The tourney was running late, so only four alliances were selected, also meaning that we were up against the 1st seed first. We won the match, it was a very good match for both teams, no major issues presenting themselves.

And then it all went wrong.

Earlier in the day, we discovered that the encoder on the left tracking wheel had died, so we did a quick replacement. This helped auto tremendously, and fixed the issues we had been having with our odometry program, but left one fatal flaw: we forgot to zip tie the wire back down.

Enter finals, when we fold our intakes back (with our 4-bar linkage, see this post for details on that), the encoder wire happens to catch on the shaft collar holding one of the rollers.

That one intake didn’t deploy for the entire match, and while we were still able to score and descore (with the pokey stick method), we weren’t able to score the fourth ball in center, costing the match by a few points.

At least I got a story, reveal plug, and an alliance with Matty B out of it

Our backboard deploy got caught on a ziptie and we couldn’t get close enough to goals to score in them. We like to believe that’s the reason we lost the match rather than just being against MJS. 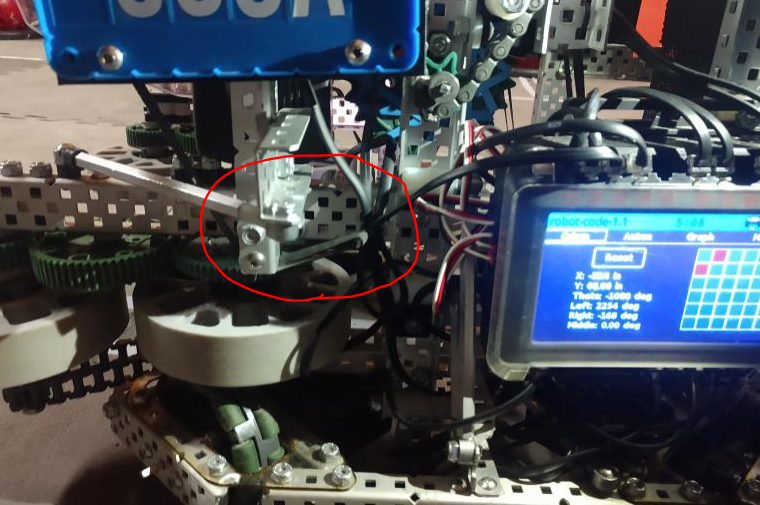 Our alliance partner tipped over (note: first time this ever happened where another robot wasn’t to blame) making what was once an easily winnable match to one where we lost.

During lrt, robot remained paused during driver control so I had to sit there for 1:45 and watch us lose

In the same LRT Yokai talked about, we were #3 seed and had a great alliance partner.

We had a single qual match where our flywheel stopped working towards the end of the match. We figured the motor had died (it had been running a flywheel at high speed for 5 months) and replaced the motor with a brand-new, straight-from-the-package, V5 motor.

Going into eliminations, our flywheel worked fine for half a match and then died with about 45 seconds left. We proceeded to lose the match by about 22 points (if memory serves), which we probably could have gotten close to in those 45 seconds.

The flywheel worked perfectly every day, for 5 months, and finally kicked the bucket in what may be our last match this season (unless we qual to worlds). Thanks a lot.

It can count if you want it to count, I am also a TERRIBLE driver.

Our drive motors just kinda started turning on and off indiscriminately. So we’d test the bot before a run, and two motors would work, then we did the run, and the other two worked, but not the first two. Then on our second run, no motors worked. Third run, three motors worked. It was a struggle and a half.

we were #3 seed and had a great alliance partner.

The flywheel worked perfectly every day, for 5 months, and finally kicked the bucket

That seems to be how it goes lol. I’ve had plenty of situations much like that, whether it be a motor, port, sprocket, gear, or even an axle. Regardless, still was fun playing with you guys. Hope you end up with a world qual

I2C error in the middle of run during our first live remote ever!

Probably when our robot was too light (which we solved immediately after) was flipped by some random teams crunch bot that was for some reason geared completely for torque. Like really, WHY?