What strategies are NOT allowed in Tower Take Over?

SG7 and other rules block a lot of de-scorring techniques, what else isn’t allowed?
Some things I’ve notices

The protected zone rules are confusing because you can touch the foam tiles but not touch anything in them (generally), so I would just steer clear of anything concerning that relates to the opposing alliance’s protected zone.

i thought you couldnt descore goal cubes but i couldnt find any rules about touching tower cubes (besides alliance tower cubes)? was this in the guidebook?

You can’t touch the opponent protected zones, or goal zones period. Any cube in the 5 towers in the middle of the field are fair game, any team can score in them, and any team can descore. The only tower you can’t touch is the alliance tower for the other team, but they also can’t touch yours. So you can descore from neutral towers, but anything that’s colored for a the opposing team, you can not touch.

how is “contact” defined? if a robot was holding a cube, and the cube was contacting an opponents scored cube, does that count as the robot contacting the scored cube?

Well, that’s tough. You can definitely start by saying that contact is when your robot is touching something. But in the SG rules, I believe , it states some rules about protected zones. Part of that mentions that if you cause your opponent’s cubes to become unscored (or even if you score for them), you’ll get a penalty. So whether your robot touched the cubes, or throws another cube at the goal zone, it’s illegal

You aren’t allowed to do that.

SG7 Use Cubes to play the game. Cubes may not be used to accomplish actions that would otherwise be illegal if they were attempted by Robot mechanisms. Examples include (but are not limited to):

Anything interaction with scored cubes in your opponents goal zone is illegal. See SG7. It’s a total dq, even if accidental.

Update: I think that if you were playing defense and pushing the alliance bot around the small, non-protected goal and you cause them to knock a stack over that would be legal. Please let me know if anyone sees anything contradicting this.

I mean, the manual says that causing something to happen in an opposing goal zone is illegal, but I think that this is a good thing to consider especially since the offensive team will get the benefit of the doubt.

Can you provide a citation for that?

SG3 is pretty clear that causing an opponent’s stack to fall over is illegal. The question is whether or not doing so indirectly (by pushing another robot into the stack) is included.

Ahh F. I was focused on A and B. I think this probably needs an official Q&A answer - “Is it a violation of F to actively interfere with an opponent robot in such a way that they descore their own stack?” 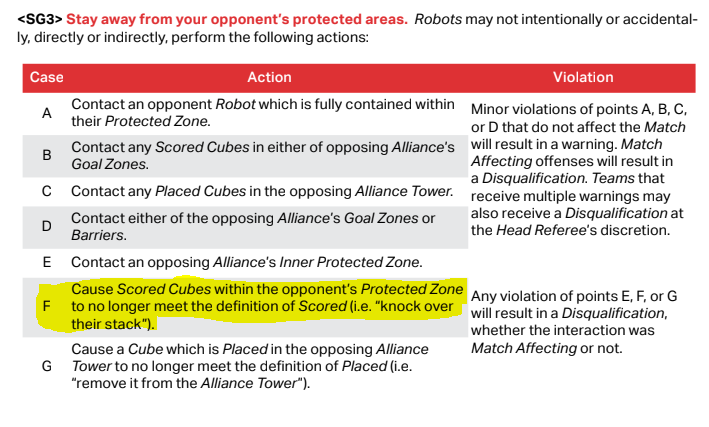 I wrote this whole thing about how it was legal until I looked a little closer and…
Rule < SG3 > states that “Robots may not intentionally or accidentally, directly or indirectly, perform the following actions:”
Some of the actions in the chart are contacting the opponent goal zone, contacting scored cubes, contacting a robot fully contained within a protected zone, and more.
As we learned in Next Level, indirect essentially means that it’s not the robot, but it’s caused by the robot.
I believe VEX has made it 100% illegal to touch the goal zones of the other alliance at all. I would love to be proven wrong but this is what I’m understanding.

Read the first line of SG3 above the chart, I skimmed over it too but reading it will answer everything.

Edit: This may be ok actually, see lower comment.

You’re right, looks like such an interaction is illegal. I still think a Q&A question to clarify the exact extent of the rule would be worthwhile though.

I’m looking at this again, and < SG3>F is specifically about cubes scored in the protected zone goal zone. I don’t think this offers any protection from bumping the opponent into their own towers in the small-square goal zone.

Update from other thread:

Idk why I keep getting mudled on this. You’re right.
< SG3>Robots may not intentioally, or accidentally, directly, or indirectly … contact any scored cubes in either of opposing alliance’s goal zones.
I must have read all this 50 times and that kept eluding me.

I think vex tried to destroy any loopholes in affecting the other alliances scoring. The game will be crazy enough with the towers.