What Type of Snailbot is Best

It’s too early to say for sure.

What version do you think will be the best?

Isn’t that yours
20 characters

As any design can be perfected, it’s hard to tell. But due to @Xenon27’s simplistic design and implementation (back to bragging about him again), using rubber bands as rollers is the best, most robust, and reliable solution. By using tank treads to manipulate the balls, that will mean if it snaps, the entire system snaps. But if a rubber band snaps on the rollers, you may not even realize a band snapped until after a competition with a couple of win points under your belt. That being said, due to the sheer simplicity and robustness of rubber band intakes, I gotta hand it to them to be the most effective. Looking at @Xenon27’s rollers on the front intake it seems to be good but I think gears are always the best solution, otherwise if a chain snaps its probably instant lose once you join the competitive brackets such as during States or Worlds. I believe that there’s good potential for X drives this season as they can be very useful for autonomous (since autonomous is veryyy important now), but I’ve said that so many times that it’s hard to tell if X drives have extreme advantages this year.

I can see the hoodbot class of robots splitting into 3 different varieties.

one one end is a super simple one, designed for optimal speed. a good example would be 10955m. 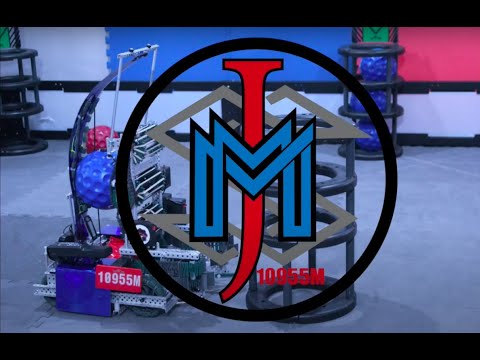 from the reveal, I’d say this robot has the fastest possible cycle time, as it appears to be bottlenecked by the speed of the balls as they fall in the goal.

nearer the middle would be a bot similar to mine, that has very fast cycle times but also can do some fancier things like sorting and discarding. I will say that my reveal does a good job being realistic about my robot’s speed. Most of the clips were done in a single take (like it worked how I wanted to first try), and I don’t actually have any driver practice or any automation going on yet, so it will likely be able to go slightly faster than in the reveal in competition. I also haven’t done any fine tuning at all, so things like rollers speed and shot angles might improve, idk I might have just gotten lucky and had everything as good as its going to get on the first attempt, but I find that unlikely.

then on the other side of the spectrum would be a robot like 1727g, with a slower cycle time, but a much higher capacity. I think this kind of robot will fall out of favor eventually because the slower cycle times imo aren’t suited to the fast pace of the game, but we’ll see, its hard to say with certainty how things will play out.

Quite surprised to see TVA representation before the competitions even start (Teams 10955M and 46535K). But to be honest, I am not sure if this season would require alliance support, due to all of the robots this season being simplistic because of the simplistic game itself (Unless, of course, there’s a unique strategy we don’t know about that may be introduced in the future).

sounds bout right! Seems like this will become the meta bot this year.

can you please explain why you would want a single ball hoarder?

My robot has a single ball hoarder so I might be able to help. The easiest question is why not? If you can block the others teams access to a ball then you should it makes scoring balls harder for them. They have to drive around the field more to grab their balls because there are less balls on the field.

I don’t like the extra weight, and handicapping myself on intaking 3 opponent balls

here is my response to your “why not?”

Although our team didn’t do a snailbot, I think the best type of snailbot is the one where you can trash the opponent’s balls through the back. So 4 rubber band rollers and a single motor per two rollers. Also, using the plastic all the way to the top didn’t quite work out for some people in our school. I recommend using a “lid” at the top instead.

Tbh, I would strongly doubt the design you talked about, i.e pooper in the forum’s term, will be useful in this year’s competition.

The best design for a snail bot is just a simply 3 ball capacity ones with extremely fast cycle time. As of the hood design, I guess it depends on the team. In our organization, multiple teams have success on implementing something similar to 10955M’s “umbrella hood.” Anyways, good luck with your season this year.

its not super good but it’s one less ball the opponent has access to, and if you want to you can use it as an extra spot of storage (my bot at least can retract hoarded balls if I want to). my hoarder adds only the weight of 2 standoffs and a rubber band, so that isn’t slowing down my drive at all. poopers are only the weight of 4 sprockets and some rubber bands, so that isn’t harmful and poopers are more than worth their weight. Also it makes your robot stand out as something a little extra to judges and prospective alliance partners.

I would argue that it takes a robot longer to intake a ball and score it than it does to just take a ball from the bottom of the goal to the top.

Under the constraint where the goals will be full with 3 balls, there is actually no cases where discarding a ball from the back is necessary. You can cycle your alliance’s ball to the top just by intaking 1 or 2 balls in all 8 cases of ball permutation.

of course it’s unnecessary, but it might make the difference between winning or loosing. and for skills is very good, because you can empty all the blues while you’re scoring.

The loss of efficiency through chains hurts cycle time, which is the most crucial part of the game this year.

Removing balls with a “pooper” in programming skills can potentially mess up the field if removed balls bump into other balls. It can be a potential hazard which can mess up your route, thus probably better to stay away from using it.

actually, poopers can help make sure no balls get messed up. see the skills route taken in 97963a’s early season reveal, they have a skills route using a pooper than ensures no red ball is at risk of getting hit because of how they poop.

there are ways of reducing the chances of this to almost nothing. if you protect your chain you can ensure it won’t snap because of external forces. There is not a lot of torque going through the chain at all so it’s not likely to break because of that. and if you’re really worried you can make sure all your motors are linked to the front rollers so that if chain does break your robot still works, just not the pooper.

I would argue that it takes a robot longer to intake a ball and score it than it does to just take a ball from the bottom of the goal to the top.

And now i will argue against that. Imagine if 2 bots tries to score a ball into a goal. They start at the same location and travel to the same goal, just that one have a ball on the pathway, while the other have to cycle the bot on the top. The bot with the ball on the pathway will take shorter time to deposit the goal. 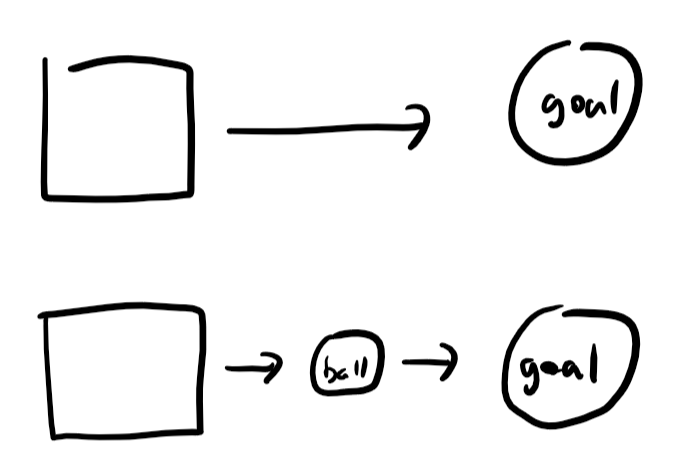 Not only is the intake smoother since there’s no resistance, the ball is also simultaneously getting indexed while driving over to the goal so it can be instantly deposited, while the ball stuck in the goal still have to be cycled to the top then deposited. To put simply: the fact that you can index and drive simultaneously with balls on the field creates a great time save in topping the goals off. Therefore, using a pooper to place all opponent balls on the field probably isn’t a good idea.

Also, since pooper will leave goals with slots open on top due to opponent balls getting removed, the opponent can just drive over and top the goal off in sub 1 second, meaning you spending time cycling the goals will be useless, or even more advantageous for the opponents since they now have higher cycle speeds than you. You’ll probably just hurt your team by trying to use a pooper

this is dependent on a ball being between the robot at the goal. most of the time, the robot has to actively chase down a ball that is near, but not perfectly on the way, to a goal.

another factor is defense. it is much easier to defend an opponent who needs to collect the balls from the field that one that has the ball they need at the bottom of a goal. because once they get to the goal, there is no stopping them from cycling, but you can definitely stop them or at least slow them down from fielding balls.

but really the time difference between these scenarios is mostly negligible imo. a good robot will be fast at both.

I would argue that having a pooper is better overall:
You can still do all of the strategies that a robot without a pooper could because you do not have to poop.

A robot with a pooper is more adaptable as it allows you to conform they way you play to fit the opponent. If you want to be able to eject the balls during a game you can, but you can also choose to not eject the balls.

The only thing you lose is a minor loss in cycle speed and chain breakages; both of which can be negated with good build quality.

Basically, I believe that a robot with a pooper is much more versatile in competition; you can eject the balls, or you can leave them in the goal. This is what makes the pooper more useful (imo) than a robot without one, as it can adapt to your opponents strategies.