This is still a newbie issue, but my 4th graders have designed a modified clawbot that sits too low to drive up onto the bridge. I realize this is probably a design issue but I don’t know how to help them resolve the issue. We’ve tried widening the base, extending the base, and moving the battery to other parts of the bot. It’s a pretty beefy machine and all they need is about a centimeter of extra ground clearance to make it work. Anyone have any suggestions? I can attach a picture if need be…

There are any number of approaches but I’d ask them these questions and let them solve:

I did ask most of those questions already. they tried driving up in reverse. It’s possible, but they have to wiggle the bot up and any auto programs were out. The part hitting the bridge is the stabilizing axle connecting both the rear wheels and the front wheels, depending on which direction they are driving. I asked them to move the wheels down on the frame but the bot has a 5 gear drive train and only the center row of holes will support it correctly. I did ask if they needed 5 gears and they wanted it to help support the larger frame of the bot. Hence, now I’m stymied on how to help them next…Can we make a longer drive train using larger gears? I’ve not found one online. We did discover that larger wheels didn’t work because then the bot won’t turn.

this is the bot, the scoop on front raises to almost directly over the top of the bot. It stays stable when lifted and even drives easily that way. But when going up bridge it stalls out. It can be wiggled up backwards though. 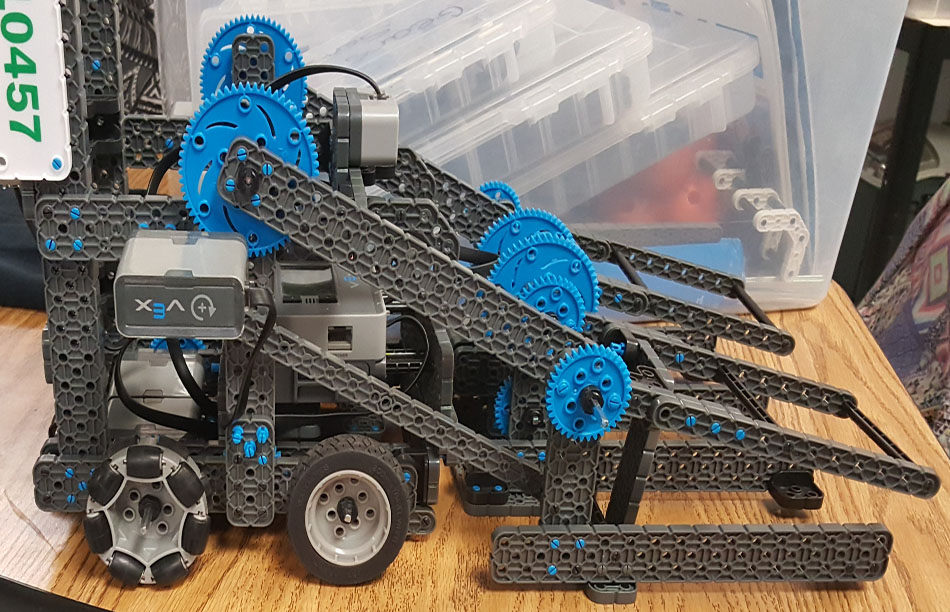 ArtGalBridget, do the wheels spin when climbing? Do the simply stop turning, even though power is being applied? It looks like the rear and front wheels are linked – is that what you meant by “5-gear drivetrain”? I’m a little surprised it doesn’t tilt forward when carrying something in that claw, it looks like most of the weight is right over or beyond the front wheels. Depending on what you are seeing:

surprisingly, bot is very stable when carrying 2 hex balls. I think we’re closer the number 2. The wheels just spin once it starts climbing the bridge. Also the back of the chassis hits the ground when the bot starts climbing. Or the front, cause they can lift the claw and drive up backwards with a little wiggling involved. When the larger wheels were on the chassis didn’t touch the ground but they lost all ability to turn the bot easily.

I blame this on not knowing anything about robots…and then being a newbie coach. I need all the help I can get

Is there an “L” bracket below the main frame rails? If so, is it hitting the bridge first? I would guess it’s providing stability to the bot, so you will need some support in that axis. You may need to filp it over to run on top of the frame rail, or put a support in between them. Also, I have seen many claw bots not get up the bridge with the omni wheels on the back. To the earlier point, you can try making the wheelbase longer with larger gears, putting 4 rubber tires on it, or going with a 6 wheel set-up.

yes there is a L bracket holding the frame rails together and also a T bracket holding up the batteries for the motors because they were not stable to the bot.(We still can’t figure that one out…) But neither is low enough to touch the ground first. The frame rail itself is what hits the ground. Also my drivers said that when they put the omnis on the front, the bot would slide side to side and they didn’t like it. They like them on the back. Would it be better to move the motors to the front then? We haven’t tried that yet.

I think I understand now. When you drive up the Bridge, the rear frame rails are what hits? Since the rear tires are so far forward in the frame rail? If not, can you post a pic of it on the bridge? Also, a pic of the bottom of the robot may be helpful.