Where do you put source files?

Thank you in advance!

Generally I’d put headers in include directory and cpp files in src. I am not sure if it matters though, because you can also add multiple directories.

(Credit to 2158 for teaching me about file management and headers)

I am having trouble with my code. When it tries to read my source files it says that it can’t find them. I included them in my code, but it still won’t read it. Is it because I have my source code in src instead of include? If so, then how do I fix it?

Could you screenshot your file hiearchy from the vexcode software? I think I’ve made a similar problem before but I’m not sure. 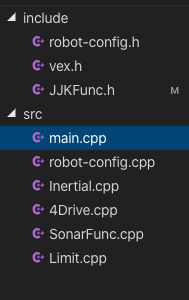 JJKFunc.h is where I included all my source files to.

Guess it wasn’t what I was thinking (I was thinking you could’ve made a file outside of the directories which is possible, but it doesn’t look like it). Does it cause a compilation error when you compile your code or something?

Yes it shows this:

In C++, a variable name cannot start with a number. I assume the same would apply to the file names as well. It seems that the only file you have starting with a number is causing the issue so try changing that.

Why are you doing #include"4Drive.cpp" in a header file. Why are you including cpp files anyway?

Yep, it’s generally unnecessary to include cpp files in header files, or rather bad practice

Oh, I didn’t know that.
Then what’s the point of using a header file?

Not just bad practice, but it will generally make your code not compile. If your code does compile it probably will not link because there are multiple definitions of the same thing. All a #include statement does is tell the preprocessor to go find that file and stick it in where the #include is.

With a small project, you probably don’t even need header guards. The purpose of the guards is to stop the contents of the file being included more than once in a single source file if there’s a chance of it being included by one of the other include files, that is, if you have something like this in your code. #include "filea.h" #include "fileb.h" and inside fileb.h it also had the line #include "filea.h" There’s no need for the pre-processor to process the file a second time as it was alr…

A header file is meant to keep code organized and provide function/variable declarations; this is different from function definitions. You can put code into headers, but it is generally bad practice unless it is something really tiny and trivial. 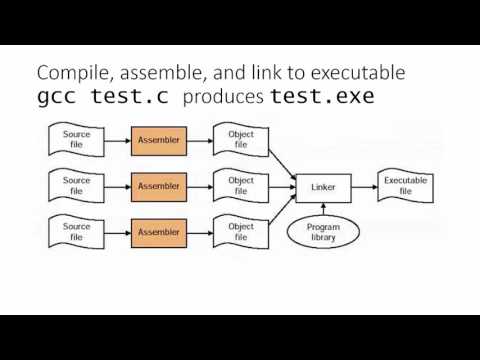 Header files are also where classes are typically created to allow them to be reused much more easily. If you go advanced enough to start creating classes, the header file is where it is the easiest to do so and is traditionally where it is done.

Oh, this makes a lot more sense now!! Thanks!