Who are the best teams in your state who didn't get to go to worlds?

Here are the teams that qualified for worlds from our state.

and outside my state definitely 2616j

I’m from 7701x and compete at central/northern Indiana competitions. I’d say our region is fairly difficult with 20ish teams that are well qualified to go to worlds but our state only has 11 or something high school spots.

My reaction to these reasons by themselves is, “Ok we can work this”
But to all of them at the same time, “Okay…”

regardless, im not salty or mad at all. just maybe slightly irritated because i mean there is definitely 1 team in particular who doesn’t deserve to go to worlds and you would know about them if you went to indiana comp but regardless i learned a ton over this season and it’s great thing im not a fresh palette next season and besides i got all the external validation i needed when we were 2nd on 574c pick list :> hehe 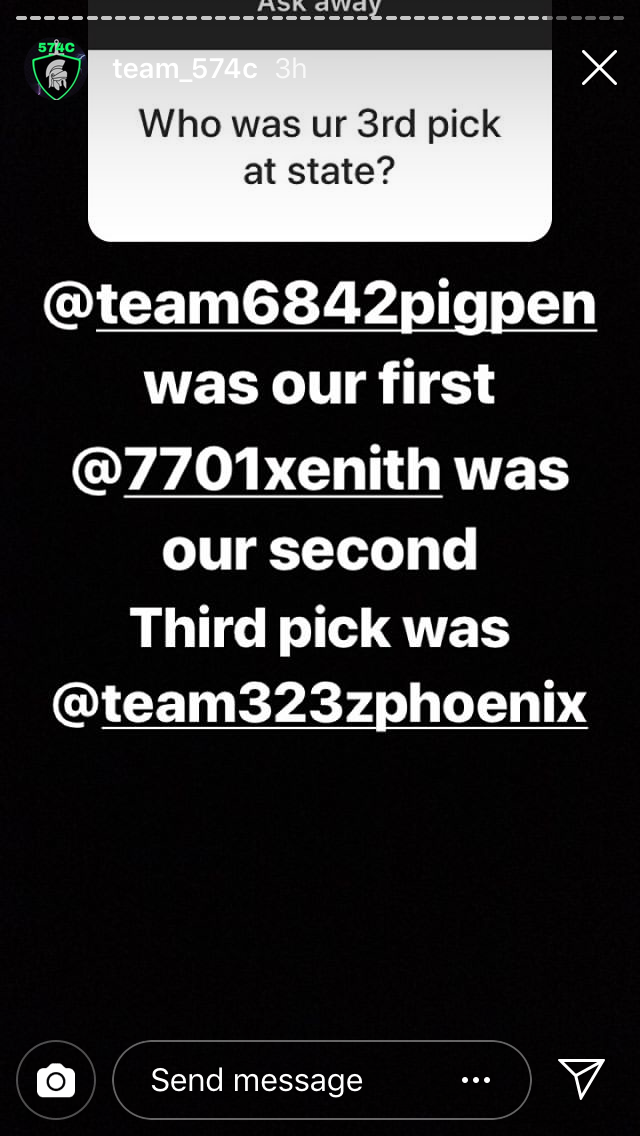 1814D needed to go to Worlds (I know, not my state. But still.). Ohio has a stupid amount of spots, but 6741E didn’t get to go, and that’s kind of disappointing to both me and them.

I mean- 7830P was a push bot that just had a good driver; they did not have another scoring component other than a rubber band intake.

I do agree with you, however, on Sprocket Sisters-they’re a really good team. I am not saying this because they carried us at Higley HS, but because they’re actually good.

I was trying to be nice, to make up for what I said at states

109A was the one team that should have gone to worlds through states.

Did they also get in off of the waitlist

974c dominated Colorado all year. They had a bot that could go with the best of them.

Team 20002A from Texas is extremely competitive, probably the 1st or 2nd best in the region. The only problem was that they got the bad-end of the V5 system. Their robot disconnects literally every competition and despite that they have been 1st or 2nd seed. Because of extremely long V5 disconnects up to 20+ seconds, they have lost finals almost every single time at competitions. During states is when they realized that their stupid system got to them. I knew that they would likely have disconnects at the event, so before the event I tried offering as many replacements I could afford to them; new battery wires, replacing the VEXNet key 's wire, etc. to see if it would be possible to prevent it from happening. As competition went up they required less disconnects, but the fact that they were still disconnecting they lost quals more than they should. Since they got the unlucky end of the V5 system, they didn’t qualify for worlds despite all mine and their efforts to prevent disconnects.

Team 400D is a really good team from Galveston, with the member in their senior year. Although they did well during the majority of the competitions they had way too many hiccups at Texas State. I won a tournament with 400D in previous events and their robot really should’ve qualified during states.

I think my team, 8685X, could be a contender for that title in my state, not to sound egotistical or anything. Only puncher with an angler there and I had the opportunity to make it in off of skills and tournament champion but I blew both of them. 4th place in skills cause I choked a 21 point driver because I failed to park which would have put me in 1st by a point and I didn’t get my previous best of 19 which would have put me in 3rd. The top 3 skills scores got invited to Worlds. Then I finished 6th in quals because of a suspected throwing/big choke from my teammate resulting in a loss then a tie that was my fault for missing so many shots. Got selected by the 2nd when I had an alliance set up with the 4th and I should have declined because the 2nd really did not deserve it, I was basically 1v2ing. Then we lost in semis by 4 cause my intake broke, I could It was all my fault too, I can’t blame VEX or that team for being 2nd, I can’t blame Bo1. I could’ve and should’ve declined and chose myself, I shouldn’t have choked on skills or in that match, I should’ve built a better intake, I shouldn’t have helped my Y team code and let them copy my bot

(they finished 3rd in skills). I can’t blame my teammate, it was his first year and he tried his best too. I can only blame myself. It was a learning experience though and I can’t wait for next season.

The tournament champions of State was two teams I beat in finals 2 weeks prior by quite a bit too. Kinda stings a little, not gonna lie.

I’ll still be at Worlds helping out though, be it volunteering or helping teams out.

I personally think that 37409B could have gotten to worlds. Their robot had been doing great the entire season until state and then they just had so many problems with it. It didn’t do well at state, however it definitely could have been a qualifier for worlds if the robot hadn’t broken down.

4142A had a nice 2BC and tailed 4142B in performance all throughout the season.

52351A was one of the 6 top teams in AZ and ranked 7th in Green Division at Nationals. At state two of the six got split from being on an alliance together (BO3 has nothing on Q-schedule luck). The other team made it to worlds via skill rank when skill champ also won state.