Why do people put rubber bands on their controllers at competitions? 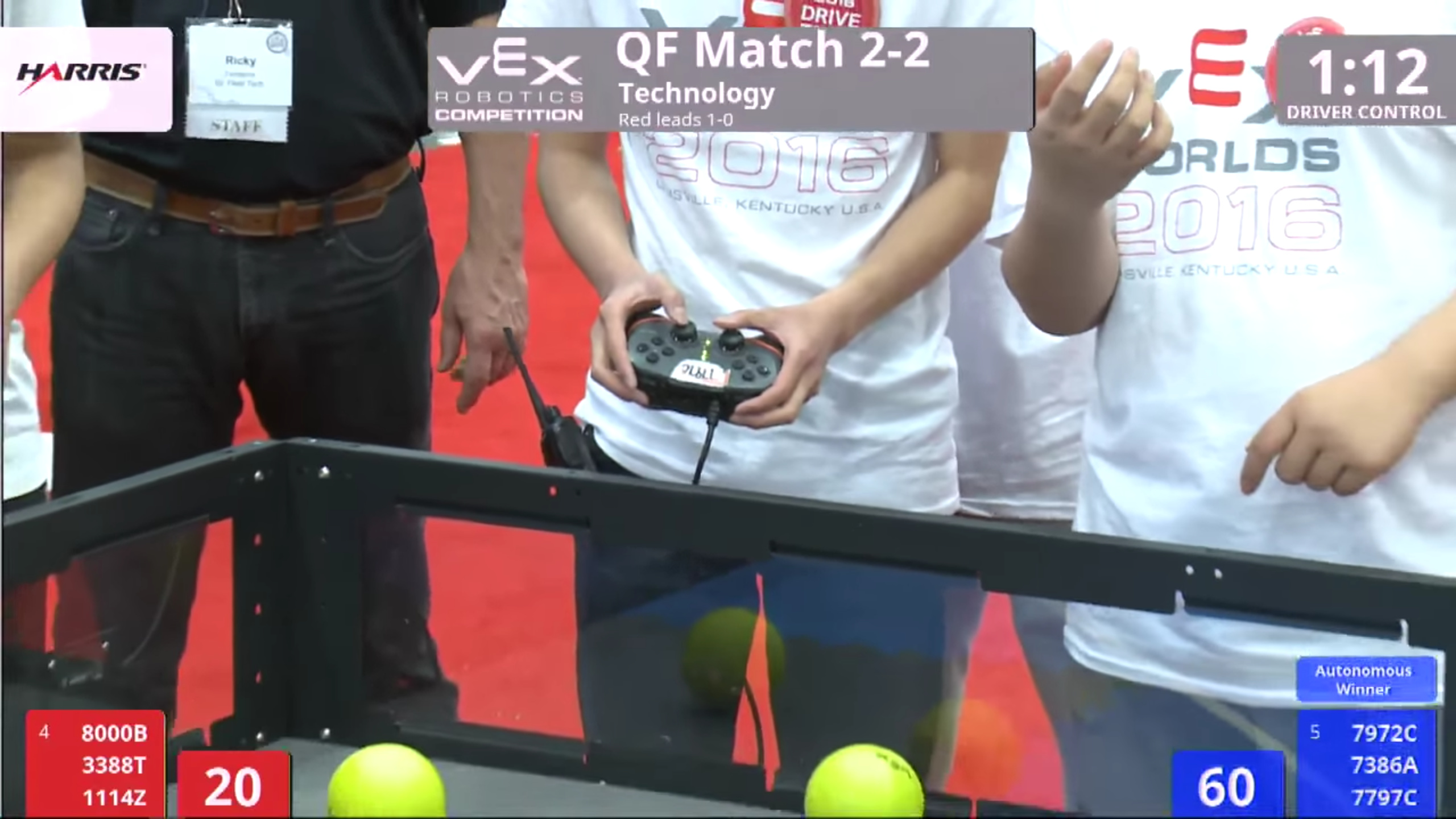 A lot of the time, I believe teams do this so that they can quickly replace controller batteries. They simply take out the screw to the back of the joystick, and hold it in place with rubberbands. Not entirely sure if that’s the case in the photo you linked, however.

Our team does it because the tabs that keep the ethernet cable clicked in are broken and the rubber band keeps the controller connected to the field. Which looking at this photo isn’t the case for these guys.

+1 @TheColdedge
all of our team’s controllers have broken tabs, so the connection cable always falls out unless we wrap rubber bands around it a few times. Also, I wouldn’t recommend leaving out the thumbscrew to change batteries quickly because you really don’t need to swap them out all that often, but you definitely don’t want them falling out accidentally.

+1 @TheColdedge @Rod yea thats what our teams do too

Our team has it for luck really. We’ve had rubber bands on all our joysticks for the past 5 years. Our drivers say it helps with gripping the joystick since matches can get intense and sweaty hands can get annoying.

When going to change out controller batteries at one point, we discovered a stripped screw holding the cover in place. That was FUN to deal with. We didn’t have a replacement screw handy, so rubber bands to the rescue. I then removed the screws from our other teams’ controllers as well.

Also we never seem to have appropriate-sized hex keys on hand when we need to replace controller batteries.

I want to caution here that broken tabs on the controller ports can and will cause disconnect issues with the field control. Team’s really shouldn’t use controllers with broken tabs on them for this reason. Sad part is you can’t legally desolder broken tabs and replace them with new ones. I think vex support might though if you send one in. Don’t quote me on that though @DRow might know more specifics about that or can point you in the right direction I hope/

If you’re careful enough, it really doesn’t matter. I think we’ve had 2 teams competing with tab-broken controllers for at least a full season now, without issues with disconnecting from field control.

I would say to just use a partner controller for actual driving and select a drive team member to make sure field control remains connected for teams that only intend to use 1 controller. It’s not worth the money to replace the main controller, especially with v5 coming soon.

We rubber band to keep the key more secure.

As someone else stated before, our teams use rubber bands to hold on the back cover for the batteries because it’s a bother to open up the screw, and they’re either missing or stripped on most of our controllers anyways.

We had about 5-10 bands on each side (not covering the battery plate), and then 2 on each side covering the battery plate… My driver wanted his controller to look cool without making any permanent modifications, so he took a bunch of blue and orange rubber bands and created a large grip on the sides of the joystick. Ended up being pretty useful, since suddenly one of the bands used to keep our robot in size snapped at Worlds, and then we were able to just pop off a band right then and there.