I’m just wondering why did teams use 2.75 In omni wheels last year? was it to have a low center of gravity? stop rings from getting under? motor placement? also can 2.75 wheels have 60T gears on them or will they scrap the ground?

I did not compete last season but I did coach, and yes generally its for the reasons you listed. The smaller wheels provide a lower center of gravity which reduces possibility of tipping. It would have helped prevent rings from getting under your bot , the other side of that would be it would be easier to get stuck on rings if one did get under your bot. The motor placement also is sometimes ideal because the smaller wheels keep the motors lower and out of the way the best. As to the question about the 60T gears it really depends on the weight of the robot, if the bot isn’t very heavy say less than 15lbs then you are probably okay with using 60T gears. However if the bot is much heavier you might find that the robot sinks into the foam matts which would cause the gears to scrape.

Additionally when you are talking about base design with different wheel sizes teams may have used the smaller wheels with a higher rpm to achieve a similar or faster linear velocity. A great example of this is that a (fairly popular) base with 3.25in wheels running at 360rpm would have a linear velocity of around 5.5x ft/s. Now taking into account the 2.75in wheels a team could eliminate gear ratios and run them direct 600rpm and achieve a linear velocity of around 7.2x ft/s. This is just an example of how teams may decide wheel size depending on more than just structure considerations and they might be looking at what linear velocity fits their strategy best.

damn, thank you!! now you got me thinking more!!

for the 60T gear question, it depends heavily on the amount of wheels 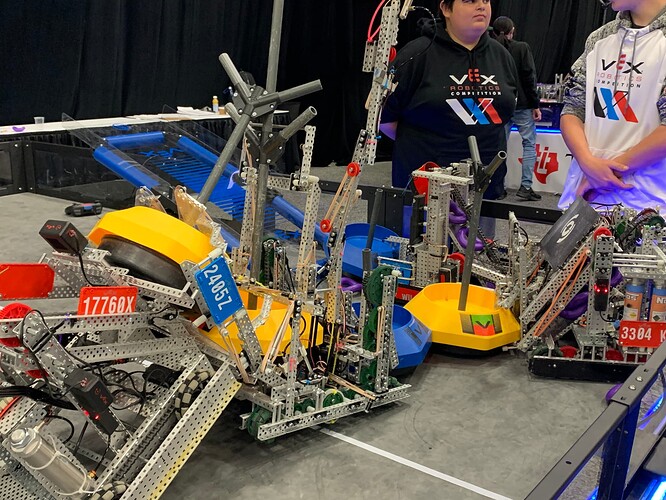 nic getting pushed1920×1440 340 KB
This robot 2405Z used to have 4 wheels, they run 360 on 2.75 which is 3:5 600. originally their gears scraped into the floor but he added another center wheel and soon the robot drove fine. the reason for this is the more wheels you have the less weight on each wheel distributing it sinking you into the tile less. of course, this means you have less traction per wheel so this is why people often have center traction wheels to make up for this difference in traction. so no matter the weight of your robot you can add more wheels and you should be fine. of course after a certain point adding more wheels becomes unrealistic but you can dream.
8 Likes
pdh21 June 15, 2022, 5:22pm #5

thanks for all the information!! thanks so much

So it is said, if you plan on driving over the barrier this season, 2.75" wheels will make that more difficult. You would need to abandon the low clearance advantage of the small wheels to prevent getting stuck.

The small wheels effectively work as a torque ratio to the ground.