I am the team leader for team 1200Z, and I also help with the younger 1200 teams as well, with some construction tips, competition advice, and other sorts of knowledge.

One thing I noticed with V5 is that static electricity really messes with connection from the controller to the brain. At all of our regional competitions, we had several disconnection problems, and most of the local teams agreed that the main issue with our robot was not a mechanical or programming thing, rather all of the DC’s we have during tournaments. One of the in state teams (will not state who it is just in case they don’t want to be “thrown under the bus”) showed us after a friendly pre-state scrimmage the grounding wire they had. Essentially, this is an old 2-wire cable that wont be used anymore in VEX with V5, and what they did was exposed both sides of the wire, and had one attach to the metal of the robot and the other touch the field tiles while they drove. Essentially, this grounds the robot so the amount of static electricity is reduced heavily. We quickly put this on after the shared with us that it works very well, and sure enough it did. Being who I am, I enlightened our other club teams about the exposed wire, and our first year 8th grade team put the ground wire on their robot as well.

At the Wisconsin VRC State tournament about a week and a half ago, we competed very well. I won’t use this as a bragging session right now, but we did very well. Throughout the tournament, the inspection table saw our wire and said nothing about it, we stated it in our engineering notebook and to a handful of judges that came to talk to us over the course of the two day competition. Everything went really well, and when state came to a conclusion, the middle school state tournament started right away.

With the middle school state tournament, our club team 1200C was ready to compete. At the inspection table was our regional support manager from RECF. He saw the grounding cable, and immeditely told our club team to chop it off. They did, as once he states something, not much can really be done unless explicitly being stated in the rule book (and if I racall correctly, there is nothing about grounding robots with cables).

He told our middle school team that modifying electrical components is illegal, which is definitely defined in the rule book. So oh well they were not able to use the grounding wire for their state tournament, even though right before their tournament, not only our team, but a couple more high school teams that competed well were using these wires and not being called out for it or being told to cut the wire off.

When we came back from the state tournament, I was able to talk to some of our club mentors. They and I all agreed we don’t see what is wrong with the grounding wire. We don’t see how it is modifying electrical components, if it is not being directly plugged into a cortex/V5 brain. Furthermore, we made it clear at state that we were using it, and no one chewed us out for having it.

My main question is, is having an exposed wire touching the field tiles legal? At one Wisconsin VRC state tournament it was all fine and dandy, and at the other VRC state tournament it was illegal. I hope this thread can strike a friendly discussion towards this, and I hope an official from VEX can help enlighten not only me, but our club, along with some of the local teams in our area. I also am wondering, is there a way around DC’s, or another method of this ground wire?

Here is a picure of the gorund wire we have on our robot, its not the best picture, but it shows how we were able to do it. Also, with the help of a mentor at the middle school state tournament, they were able to problem solve a new way to counter strike static electricity. Let me know what you think! Thank you all so much if you got through reading all of this!

(Left is the middle school quick solution, and the right is our ground wire) 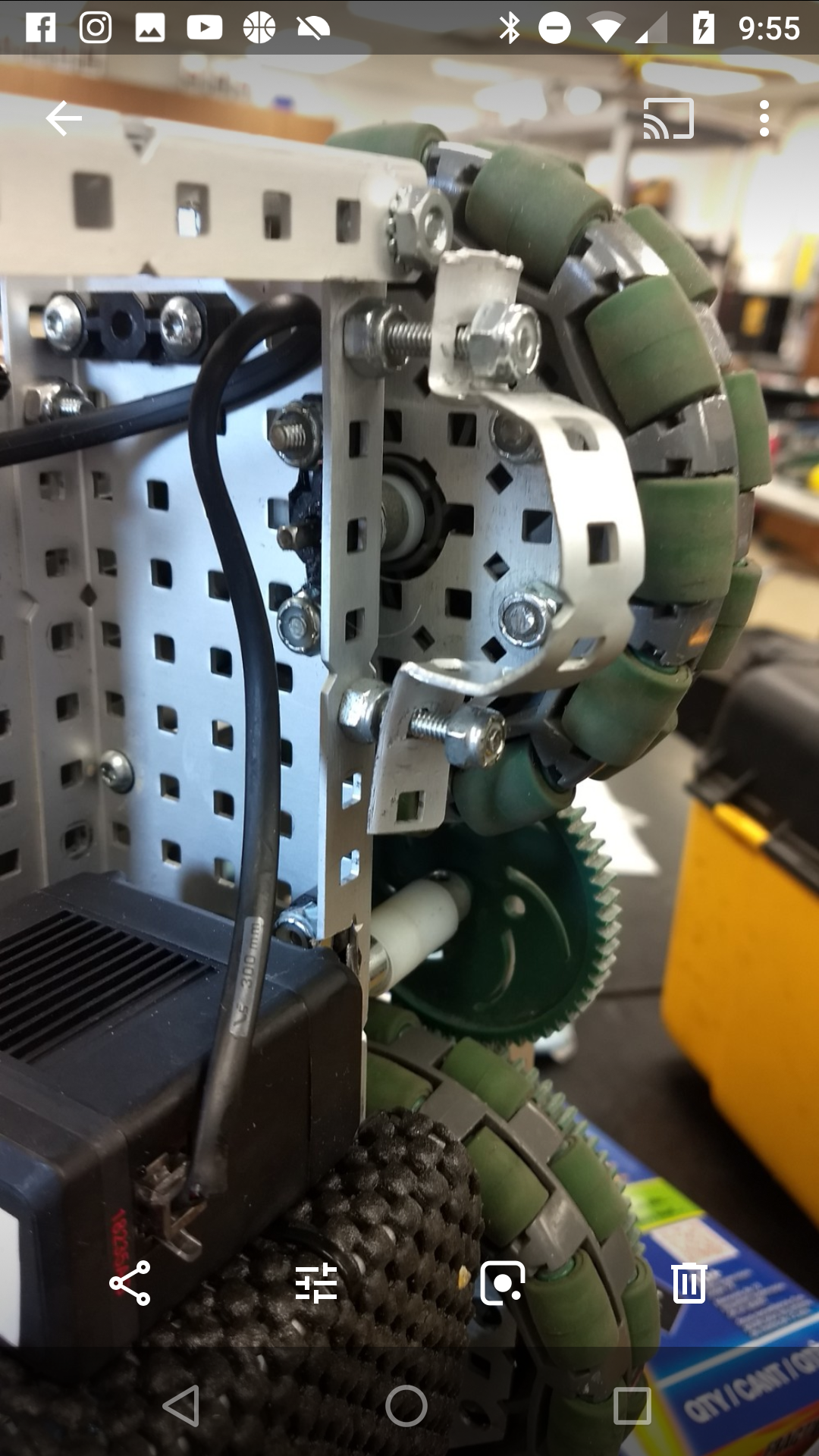 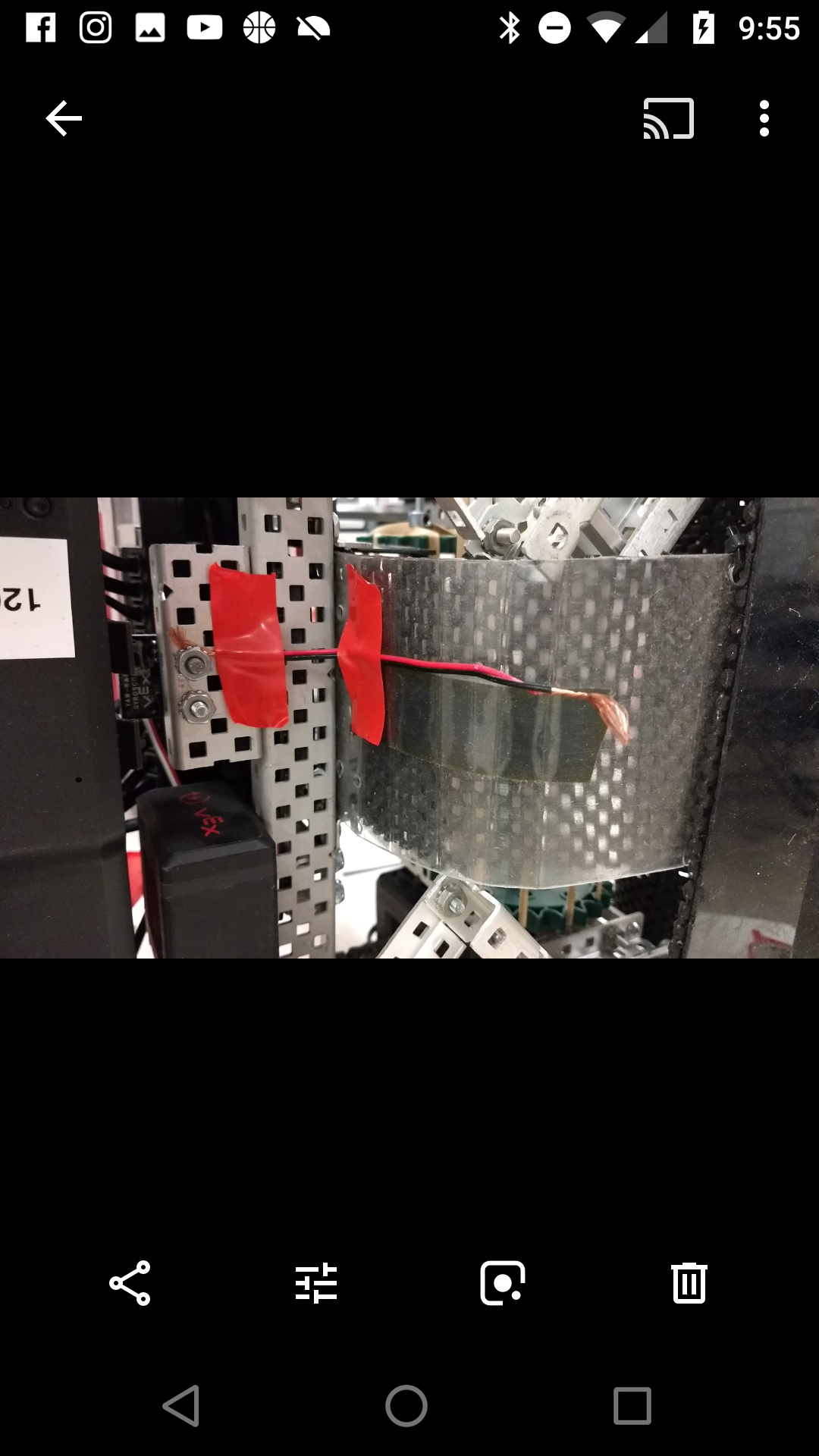 Couldn’t a peice of metal dragging on the floor do the same job? I don’t quite fully understand how grounding robots works so correct me if I’m wrong

My team actually did this several years back. Static definitely causes disconnections and in order to counter this, they added a similar grounding wire. I’m assuming it’s legal considering they went through an entire season with it and this was back with v4. As for the legality with v5 and perhaps new rules that may have been implemented over the years, I am not sure. Curious to find out if it is still considered legal. I haven’t implemented it on my robot, rather my team uses static guard spray to try to eliminate as much static as possible. This grounding wire might be more effective though.

Some discussion has been done on this previously - see Forum Post. Also, as that post refers to, way back (WAAAY back) in Starstruck this was ruled illegal on the then-official Q&A and mentions specifically no modification of electronics Karthik Starstruck. The reasoning and answer is probably the same now, but the only way to know for sure is to post a question on the now-official Q&A.

I’d recommend using one of the alternative grounding methods indicated in that forum post and I think there was another post somewhere where a team made a ground out of metal parts.

We don’t see how it is modifying electrical components, if it is not being directly plugged into a cortex/V5 brain.

Hi @mvanrossum. Congratulations on a great season and an excellent showing at the Wisconsin State Tournament!

I can speak with some authority on this question, since I was the EP for the Wisconsin State Championships, and was fully aware of the issue when it came up at the VRC MS championship.

As was pointed out by others, it is clearly illegal to have a modified electrical component on your robot in any form, whether it is used for a grounding wire or any other purpose. Here is the rule:

Some part modifications are permitted, with the following restrictions and clarifications:
a. Motors (including the internal PTC or Smart Motor firmware), microcontrollers (including V5
Robot Brain firmware), extension cords, sensors, controllers, battery packs, reservoirs,
solenoids, pneumatic cylinders, and any other electrical component or pneumatics
component of the VEX EDR platform may NOT be altered from their original state in ANY
way.

There is no ambiguity here - no modification in any way is allowed. It does not require them to be plugged in to the Cortex or Brain or anything else - it says they can’t be modified. Cutting and stripping is definitely a modification. You can’t argue it is a non-functional decoration, either, since it is clearly only there to provide a function. The only thing that would change that would be an official QA post that would reverse past precedent.

You have some bad logic in your argument that since it was OK for you and others to do it, then it should be OK for everyone. If I or the RECF manager had seen the grounding wire at the HS tournament, we would have told you it wasn’t allowed. Simply because the others that you encountered weren’t aware of that rule, doesn’t mean it was OK. We rely on volunteers to run almost all aspects of the tournament (including inspection and judging), and even though we try to make sure all volunteers are as prepared as possible with all necessary knowledge, things sometimes get missed. It really is the responsibility of the teams to be fully aware of all rules and make sure they are following them. It can’t be a game of “if you don’t catch me, it’s legal.” Anyone familiar with the advent of PTC testing of 393 motors knows the implications behind that.

I’m not suggesting you willingly broke the rules and just hoped not to get caught, I am just trying to point out that not getting caught != legal. You should assume that the inspectors at World’s will be more aware of all the idiosyncrasies in the robot rules and won’t allow stuff like that through. An excuse of “but it was OK at our State competition” will not fly. If you do happen to get through inspection with an illegal modification but would get caught with it during competition, it could be a DQ (it has happened before).

The solution our MS team came up with seems like an ingenious idea and I would imagine serves the same purpose as the frayed wire and is completely within the rules, so I encourage you to investigate a similar solution for our bot as you head off to Worlds.

Good luck and bring home a win for WI!

Thanks! The last thing I would want is to go all the way down to Louisville and to have them cut off our only way to reduce static electricity. I was just confused in how the rule worked, I know it was a bad argument to say “oh other teams do it so it must be okay”, and while it definitely appeared like that, overall I was just confused if it was legal or not. I will be doing something similar to the solution to what the middle school did, it seemed to work well for them and of course not modifying a wire. Again thanks for the feedback, and I will inform some of the other teams in Wisconsin that were using a ground wire to not use that method for nationals and/or worlds.

It does do the same job. It was just a quick modification our middle school team. I will be carrying on with that method now, from what Nolte stated up before.

Did you spray your fields with staticide recommend by vex? That pretty much eliminated the need for a ground wire.

I also don’t understand how ground wires working when the field tiles are insulators as are the rubber wheels.

Ed. The fields at worlds are sprayed. So no worries there

Did you spray your fields with staticide recommend by vex?

Yes, the fields were treated per VEX recommendations with the recommended product.

Great. I suspect that is the reason teams did not have static related problems and not the use of ground wires. Field disconnects are usually caused by different reasons, mostly radio interference (surrounded by too much metal on the robot) but also loose connections at the Driver Interface (since teams pull on the cable and bump the tower).

Congrats on a successful State event. I look forward to seeing the great teams out of Wisconsin at Worlds again.

Thanks all for the feedback! Excited to represent Wisconsin at US Open and Worlds!