Yeah I used shaft collars there. I wasn’t aware the threads are different, regular screws always seem to work fine for me. Maybe it’s close enough?

I didn’t also use c-channel on the outside because it’s not really necessary, just adds more weight and makes it more complicated. Also it’s a little annoying trying to get everything to line up perfectly when you do it that way.

I didn’t also use c-channel on the outside because it’s not really necessary, just adds more weight and makes it more complicated.

The main purpose of adding an outer support channel is to help prevent twisting in the pod itself when there is added weight to the base. without them, the pods will start flaring up as it is used more given there isn’t anything supporting the outer flange except standoffs.

An easy way around this is to either design and fabricate custom lexan gussets to help sandwich the outer and inner channels of a pod or to drill holes in the bracing c-channels in order to allow holes to line up. Examples of both are provided below: 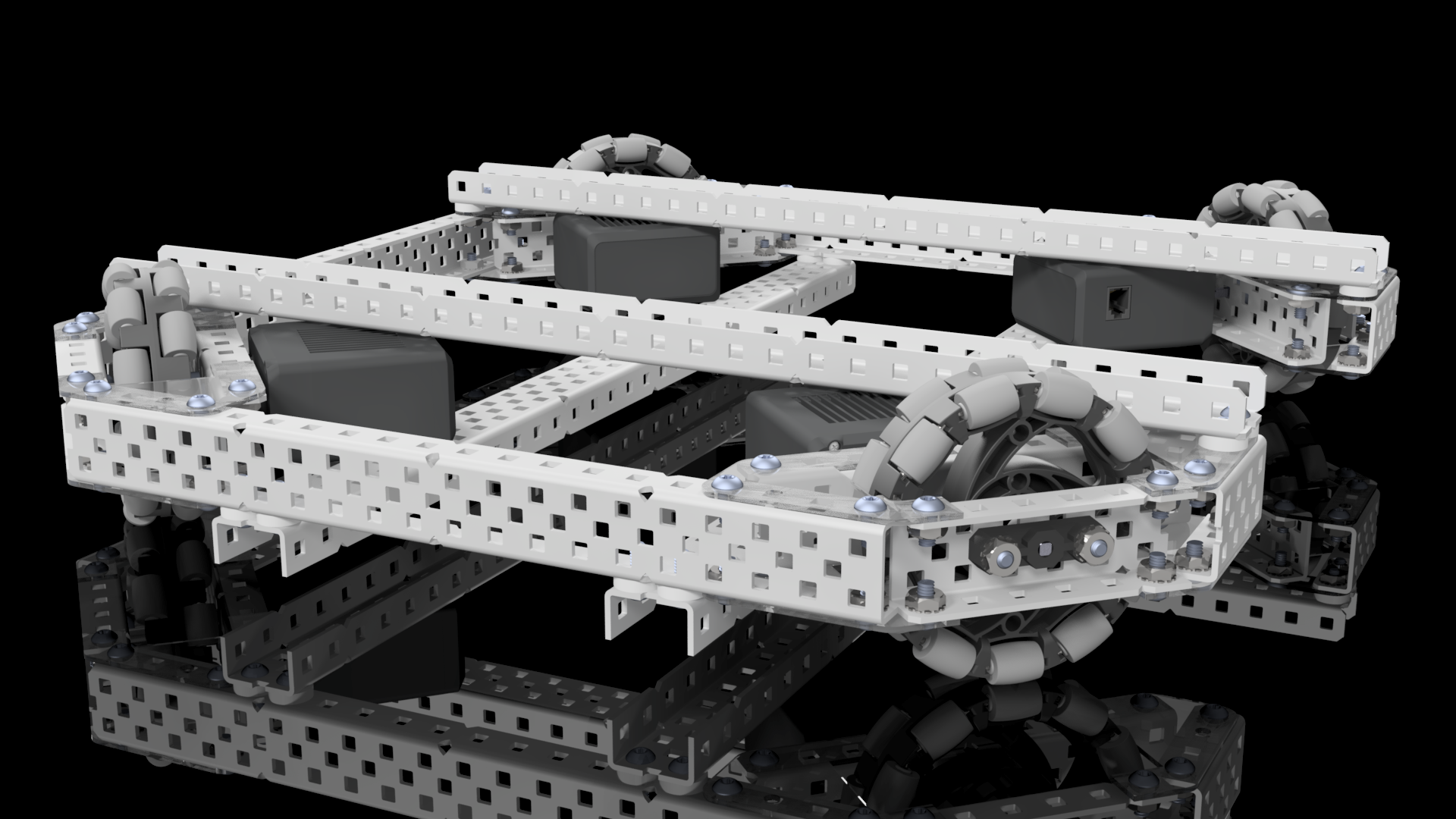 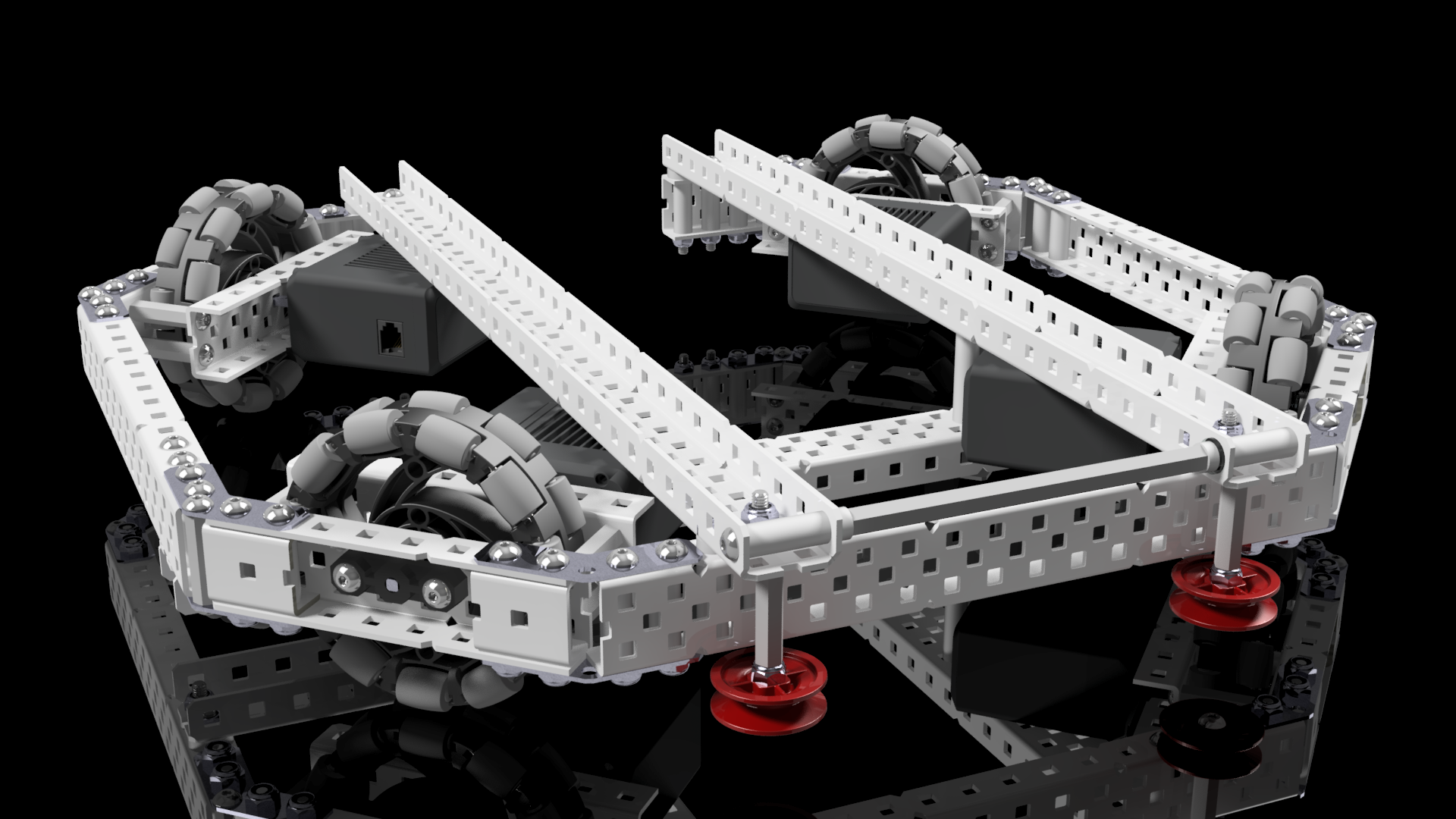 With my design (I also used a similar x-drive last year) I haven’t had any issues with flexing or twisting. In fact, it’s a lot more rigid than the robots I have built with normal drives. I am actually having a problem where if any of the wheel pods are higher, even if only a small amount, they lose traction. I think this is because the frame is so rigid that there is no flex allowing the wheel pods to better contact the foam tiles.

The new racks use 8 32 screws and lock nuts

I think this is because the frame is so rigid that there is no flex allowing the wheel pods to better contact the foam tiles.

unless it’s a bendy drive of course

And besides, foam tiles deform so much already

If your drive’s pod alignment is off by however much the foam tiles deform, there are some serious build quality issues to deal with lol

The new racks use 8 32 screws and lock nuts

Oh cool. Maybe we’ll buy some; then again they’re not that useful. I do really hate having two sizes of screws though.

Obviously having a flexible drive is not a good thing, but I do think that a tiny bit of flex in some cases does help with traction. The better solution is to try to make all 4 wheels perfectly aligned vertically, but you can never get it perfect. In a normal drive that’s usually not a problem, but I have found that with x drives, even the tiniest amount of difference can have a noticeable affect in the way it drives. Because for an x drive to drive straight, all four wheels need to have almost exactly the same traction. Even when all four wheels are visibly contacting the foam tiles, you can still have one wheel that isn’t pushing against the tiles with quite the same force. If that’s the case, it can cause the x drive to drift left or right, especially when accelerating from a stop.

the squish of the tiles as well as the weight of the robot should counter minor variances I would think.

Have shaft collars always been 8-32? I have found that on some of the older shaft collars in my teams supplies don’t fit screws while the new ones always do. For the old ones I can sometimes forcibly tap it by violently screwing the screws, digging it intothe inner surface while for others it’s just plain impossible and the screw gets stuck. I don’t know shaft collars have changed sizes or if it is just vex’s bad tolerances.

It is just tolerances. But I believe they were referring to the thread on the shaft collar, which has always been 8-32.

Because for an x drive to drive straight, all four wheels need to have almost exactly the same traction.

This isn’t true; even in cars, the wheels don’t need to have the same traction (once they’re past a certain point). The wheels simply each need to surpass the maximum tractive effort that is required to accelerate (and roll without slipping). Once the traction is past that threshold, there’s no further benefit of increasing it. In fact, unless you’re using a very particular synthetic rubber compound, you’re losing additional energy to something called rolling resistance anytime you increase traction (I could explain why this is and talk about it for hours but I have a feeling this post is going to be long enough lol). With that said, if you’re below the threshold of required tractive effort, the differences in traction between the wheels becomes apparent- it’s where in rainy weather, cars will slip and spin on the roads. Even then however, in a VRC x drive, it’s more likely that your weight distribution is off than the difference your vertical variance makes. There is no benefit to having flex in an x drive because as I said earlier, if your bot has more vertical variance than the incredibly deformable foam tiles, it’s more likely that your issue elsewhere. The x drive doesn’t need more “flex” (more accurate description is higher viscoelasticity) because the foam tile already provides that, and if you have higher viscoelasticity (or “flex”) than is needed to get the same traction (the same traction as a bot that doesn’t need a more viscoelastic chassis/drive), you’ll have lower efficiency due to viscoelastic hysteresis (one of the main factors that play into rolling resistance). It’s all about a balance, unless you’re cheating and use a high vinyl polybutadiene of course lol

Because of this, the best way to ensure that you have consistency between each wheel is to use shoulder screws (the vex ones, or the new Robosource ones that are supposed to be coming out sometime this summer) and carefully machined lexan gussets. If you’re using these and still having trouble with consistency, idk what to tell you. More likely to be programmers fault at that point lol

If you cut slits in C channels and bend them 45 degrees, you can make the outer segment of a side out of one continuous piece of metal, vastly increasing the strength of the base as a whole 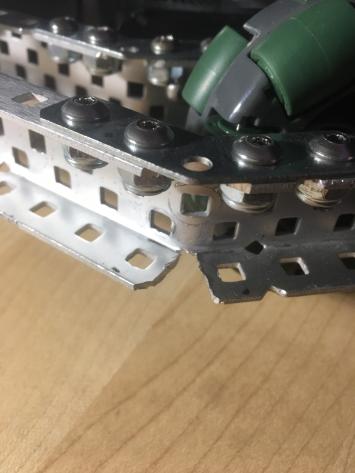 does that really make it much stronger though? I would think that bending the c channels in that way would deform them somewhat and make things a bit more jank.

Why would you do this?