I have found that this does make it a lot stronger, and is less susceptible to bending. I would intend to also add a gusset to the bottom but we don’t have the parts at the moment, and we’re just gonna make custom gussets.

Weight distribution is definitely part of the problem for me now, but I also had problems with traction when I originally made the drive. And weight distribution certainly wasn’t a problem then, because the only weight I added was a weight directly in the center of the drive to simulate the weight of a full robot. I’m now thinking part of my problem is the wheels, because I’m using old omni wheels that have probably lost a lot of their traction. But I am pretty sure that variation in the height of the wheels is also contributing to the issue. It’s only very slightly off, and I can only tell when I put the drive on a hard floor and it rocks ever so slightly back and forth. The two opposing wheels that rock back and forth are also the wheels that lose traction while accelerating quickly, and I don’t think that’s a coincidence.

this is true, and i have to agree that this is not the worst x drive wheel support setup i’ve seen. would you mind cadding it out and seeing if the holes line up perfectly, or if they’re off a little bit? i have my suspicions that it’ll be off target the same way regular x drives with gussets are, and i lack the cadding ability to check it myself (i have no idea how to do bends in the c channel or anything fancy like that; i’ve spent most of my time building so i’m a bit of a noob at cad lol). if i’m wrong, and the holes do line up, this design would be even more better than the traditional gusset design (because usually you have to drill holes or make your own gussets out of lexan if you want the holes to line up, unless you’re using 81k’s design or something similar)

@Catzilla idk what to tell ya, the foam tiles have tons of deformability and should definitely account for the +/- 0.017 tolerances that come with the standard 8-32 screws going into vex holes. i recommend using shoulder screws if it’s that much of a problem (there are more shoulder screws options and even some more unorthodox alternatives to get a perfect fit in vex holes, beyond the vex sold shoulder screws and even the coming robosource ones)

best thing you can do if you can’t try those options is to simply loosen the screws connecting the wheel supports until it’s testing on the ground at about the same height and then retighten. do that for all of the relevant screws, be meticulous about it and you’ll probably have less of an issue. and yeah if your omnis are old that’s definitely playing a part into this too. i’d replace them if you can

Yes, I’ll get back to you

I haven’t really read through the whole thread, due to having less and less time on my hands, but here’s a picture of an x-drive cad which i believe would be pretty stable, although i haven’t built it in real life. (Yet?) 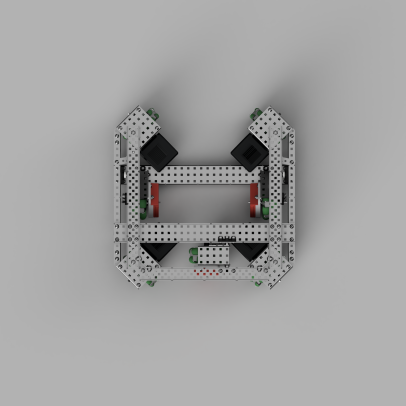 I don’t mind people using this design as i am not the first to come up with something like this, but please don’t holecount.

It might also be that your robot has one side slightly lifted off the ground, to fix it look at the supports and make sure everything is lined up

What size Omnis are those?

Yes it is that one corner is slightly higher off the ground, but it is such a small difference that it is hard to tell, and you wouldn’t expect it to be a problem. I think that the reason it affects the drive while accelerating is because x-drives are a little less forgiving than normal drives when it comes to traction, and also because my omni wheels aren’t in very good shape. I think that one of the reasons why x-drives are less forgiving of differences in traction is because they are really just two normal drive units that are perpendicular to eachother. But each drive unit only has 2 wheels, so it only gets the traction of 2 wheels rather than 4. Also, if one of the drive units gets even slightly less traction due to one of the wheels being slightly raised, the effect is more noticeable than with a normal drive because one of the drive units will accelerate slower than the other, causing the x-drive to pull to one side while accelerating quickly.