I have not seen much X-drives with high gear ratios, and as of what i see, most of them are just connected directly to the motor which makes them 200 rpm. Wouldn’t this be pretty slow? This is because i would think people would want speed on an X-drives. I just wanted to know why people didn’t want faster X-drives

Wouldn’t this be pretty slow?

200 rpm on 4" wheels on a tank drive is pretty slow, but an X drive has an interesting effect of moving sqrt(2) times faster than a tank drive of the same wheel size and rpm. So a 200 rpm x drive is moving at the speed equivalent to 280 rpm on a tank drive, which is quite a good speed.

I don’t understand how it goes sqrt(2) faster.

If we break the wheel’s force into components we get the forward one is 1/sqrt(2) as much as normal in the forward direction. Which would make sense because part of it’s rotation is going toward cancelling the horizontal component of the wheels on the other side

oh ok I see, I thought that the 2 wheels driving into each other would make a negative effect but now i realize that they help each other, but don’t people usually use 5:3 gear ratios on 200 rpm motors which is around 333.33 rpm on tank drives?

if you’re going to gear a x drive I’d do a 257 ratio for each wheel if you want faster speed and decent torque. idk how fast that’d make it on x drive tho, might be a little speedier than needed

if you’re going to gear a x drive I’d do a 257 ratio for each wheel if you want faster speed and decent torque. idk how fast that’d make it on x drive tho, might be a little speedier than needed

this would be equivalent of over 360 on 4", way too fast, especially on only 4m.

couldn’t u use 3.25 in wheels then which would amount the speed to be less?

yeah that’s about what I figured. my team actually had a really goofy idea about gearing up red cartridge motors slightly if we did x drive since the motors are not interconnected using gear trains.

yes but at that point why not just run 200 on 4"? it’s extremely simple and gives the highest speed you would want to run.

I don’t understand how it goes sqrt(2) faster

Why is X-Drive Faster?

In this article, Oliver explains why x-drives have a higher effective gear ratio than tank drives. This seems unintuitive to a lot of people, but an X-drive robot has a higher maximum speed* than a tank drive robot with the same gear ratio. To best...

People don’t gear x drives. Because the motors drive separately unlike a tank drive. People gear tank drives so you have an all wheel drive so no wheel is “dead” . But if you gear an x drive it can’t strafe .

technically you can gear them seperately; I think what you are thinking about is a gear train for gearing the X-drive, but that wouldn’t be possible because of the reason u just stated, but if you gear them all seperately, it would work as it has been pulled off before.

A geared x-drive seemed to work well for 917M in Change up, so it’s definitely possible: 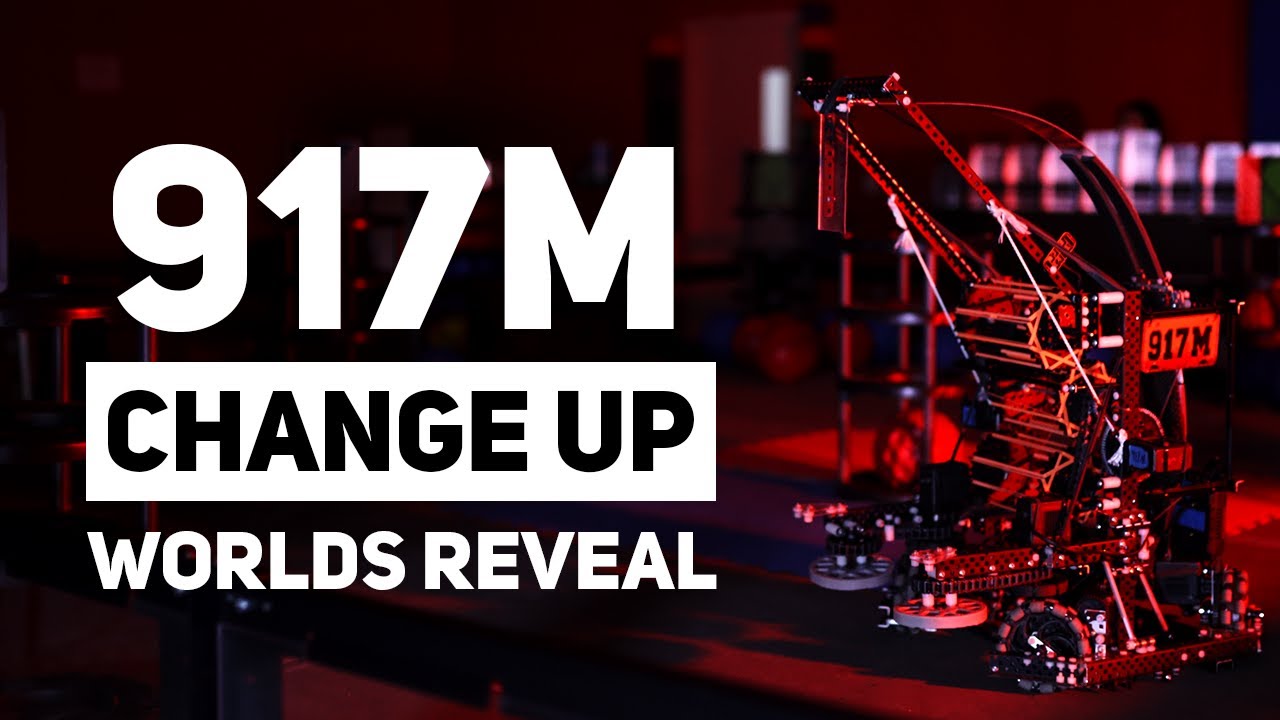 Maybe @Reyro_Fidelofish can tell us a little more about how it worked?

I think it might be something like this one (but the one u sent uses 4in wheels not 3.25in wheels)

Woah that is so counter intuitive but I get it now

yeah thats why nobody would use a gear train; they would just use gearing from one motor to one wheel

I built a 5:3 (333rpm) geared x-drive for Spin Up and it’s working great so far. Haven’t finished the bot yet so I don’t know if it’s too fast/doesn’t have enough torque, but I think it’ll be great as long as the motors don’t get hot.

Here’s a screenshot of the CAD 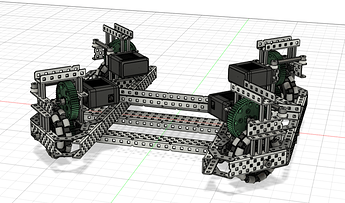 The gears, structure, and motors take up a fair bit of space but my team has been able to build around it.