One of my teams is currently evaluating using 3.25” Omni wheels instead of the 4” ones.

They have heard that the 3.25” have a lot less traction on the field and while going up the ramp.

What have you found? Are 3.25” appropriate for tipping point robots?

They have heard that the 3.25” have a lot less traction

Generally, 3.25" wheels have less traction per wheel than 4" because the contact patch is smaller

Try it out. Take a 4" and 3.25" omni and drag them against the table and make your own decision.

As always, if you have both wheels now, test this for yourself!

I’ve had no issues with climbing using 3.25s and I know other teams who have not had really any issues either. Of course, it’s always good to test it yourself with your bot, but 3.25s should be fine for climbing with 2 mogos on a lighter-medium weight bot (I don’t really know how it works with heavier bots). Of course, if you want to you can make a custom traction wheel to help with traction. Also note that I’ve never tried climbing with 3 mogos, so if you’re planning on doing that, you would have to test it yourself.

In my experience, 3.25” wheels work just fine in most cases. they definitely have less traction; however I have never seen them cause any issues because of it. There are definitely cases where using 4” wheels would be the better pick, however. it’s up to you to determine whether or not you are a special case.

3.25" wheels definitely do have considerably less traction, primarily due to the rubber being a lot harder and less grippy on the rollers compared to 4" and 2.75" wheels.

But they also have a lot of advantages, such as weight, slim profile, mounting hole, and convenient gear ratios that still make them perfectly viable in tipping point, however I think to eliminate the traction disadvantage, having a middle wheel which is a custom traction wheel made from flex wheels is a good idea. I use 3.25" wheels, and with this custom traction middle, I have traction which is very comparable, if not even greater, to a robot with similar weight running 4" or 2.75" 4 omni drive.

The process I went about making these wheels was initially pretty complex and overengineering, but I’ve refined it to a pretty simple method, where I sanded down the diameter of a 3.25" traction wheel: 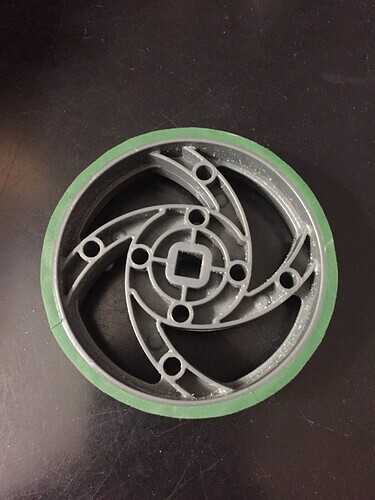 and then I cut the rim of a 3" flex wheel from the spokes, and then cut it down width-wise to be the same width as the 3.25" traction wheel hub. 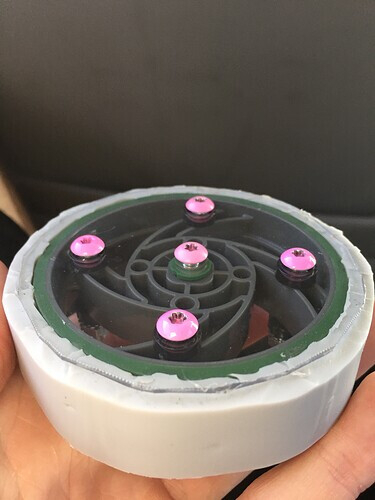 so if there is a particular gear ratio or other reason your team has for pursuing 3.25" wheels, using a 6 wheel setup with a custom traction like this in the middle is definitely a viable option.

But all 3 wheel sizes are perfectly viable, 3.25" is just my personal favorite.

If parking is your real concern here, I have been using 3.25s for the entire season before the rebuild.
My best bot before the worlds rebuild had a 6m drive and 2 1m lifts.
I was still able to easily park with 3 though.

Hopefully that gives some perspective

Are 3.25” appropriate for tipping point robots?

I would say it really depends on how much torque you have. My team used to use 3.25" omniwheels, and we actually noticed that the traction ended up being the deciding factor in us not being able to park. However, this is because we had a 4 motor base and a considerably fast base speed. I’m pretty sure 3.25" omniwheels would be effective at parking with 6 motors if your drive train speed is somewhere around 330 - 360 RPM, and overall the supposed loss of traction that the wheels face only becomes a factor if your robot’s drive train torque comes into question.

We will try and see. They currently use a transmission to switch between high speed and high torque. They have a 360-72RPM at the wheel with 4” wheels. 360 is just 7” slower getting to yellow when compared to a 280 RPM robot.

They are currently building a totally separate robot with the 3.25” wheels so they will be able to compare it side by side and head to head.

Yeah, I’ve have used the 3.25 inch wheels on all 4 versions of my robot this year and I have had zero issues. Traction isn’t everything when it comes to parking, plus the 3.25s have unique advantages that make them better at parking such as convenient hole placements which cut down on slop. I’d say just prioritize whatever rpm you want to use, and if a particular wheel allows you to achieve that then use it.