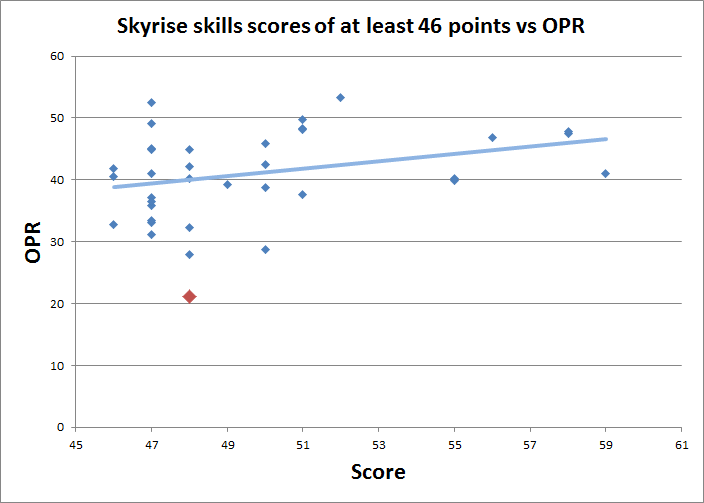 OPR is a way of estimating the number of points a team scores for its alliance in each match (read more here). I thought that comparing skills scores to OPR could be a smart way to quickly identify skills results that might not be accurate, so I decided to redo Quadcopter’s analysis for all skills results instead of just the top few.

This was what I got (results for which OPR could not be calculated, for example results at skills events, are excluded): 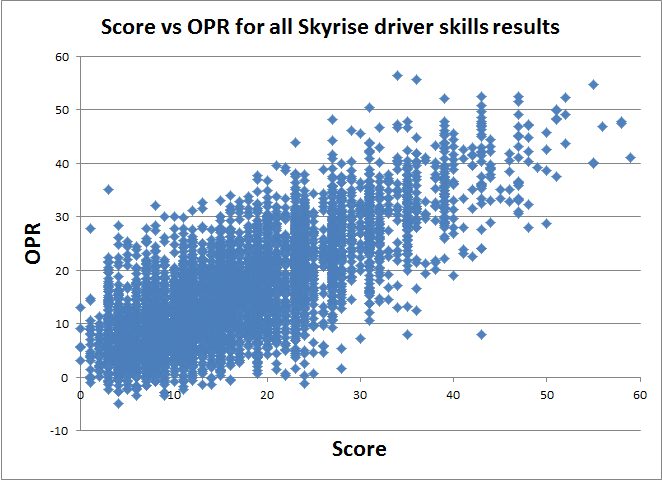 I was looking for results where a team had a high skills score but low OPR. There is one obvious candidate: 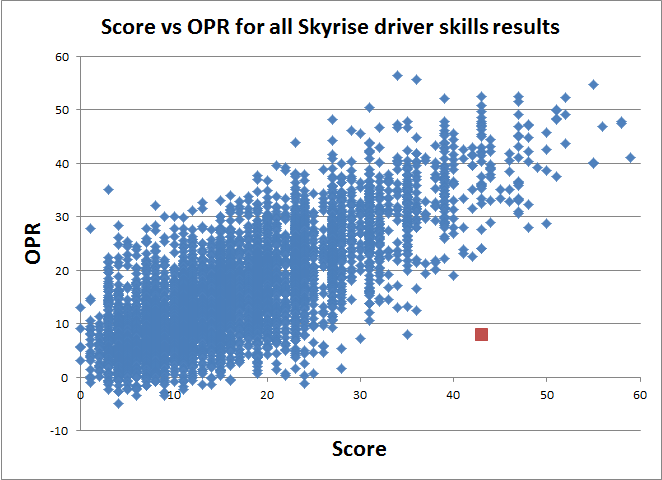 So, I decided to do a bit more digging. This is 3560Y’s score from the St. Catharine’s VRC Qualifying Event.

3560Y is on the Worlds team list, and I believe Canadian robot skills slots are the only way they could have qualified. So this score is worth taking a closer look at.

Here are the skills scores from the event:

Note the 1-attempt score of 43 by 3560Y. This is also the same score that 4659A got. One possibility is that this score was mistakenly entered for both teams, when only 4659A actually scored 43 points.

3560Y has been a low scoring team all season. Here are their OPR, DPR and CCWM statistics for Skyrise:

The important line is the blue one, which is their OPR. It hasn’t gone above 8 at any event this season (so their average number of points scored for their alliance per match probably hasn’t gone above 8 this season). They have only attempted skills at two events: the St Catharine’s event, and an earlier event where they scored 15 points.

I have some videos of 3560Y’s robot. First, from the St Catherine’s Qualifier, where the 43-point skills score was recorded (3560Y starts on the red autoloader tile):
3560Y scores 0 points.

So we know that at the competition where they recorded a 43-point skills score, 3560Y was a very unstable scissor lift that scored very few points per match. At the Provincial Championship the robot no longer had a skyrise manipulator, presumably because the one they had at St Catherine’s didn’t work.

Based on the above information that I’ve been able to gather about the robot’s performance, I think it’s probable that 3560Y didn’t actually score 43 points in skills at the St Catharine’s event, and I think the most likely explanation is that the score from 4659A was accidentally recorded twice.

You should be able to see in the results from this event how many of the points in 3560Y’s 43 point skills run came from each of skyrise sections, skyrise cubes, post cubes, post ownership points and floor goals. If you don’t have this information, then the event partner for the St Catharine’s event will have it (in the tournament manager database from this tournament). If the database shows that the point distribution for 3560Y’s 43-point run was the same as the point distribution for 4659A’s 43-point run, then that’s very suspicious.

I strongly believe that you should look into whether this score is genuine.

I have posted a parallel thread to this one in the hope that people from the community can provide some information about this:
https://vexforum.com/t/3560y-43-point-driver-skills/28843/1

Thank you for your time.

Here’s what I posted in the other thread.