From the last round of Q&A:

Referees will be expected to make a common sense interpretation here. Robots that extend a dumper over in the process of scoring are not trapping or cornering their opponents. Robots that extend wall like structures over the fence are in definite danger of being ruled as violating <SG6a>, especially if this wall traps their opponent into a corner. I understand you want an explicitly defined distance here, but there’s too many factors involved to provide one. However, it’s suffice to say that if you’ve restricted a Robot to a third of the area on their side of the fence, this is almost certainly a violation. That’s not saying that a violation couldn’t be called for a bigger region, just a guideline to help the referees.

In this thread I asked how a referee might make these “common sense interpretations” and you said the following reply made sense:

I think I would rule as follows:

I hope this makes sense. This is what I have gotten to based on the Q&As so far.

I interpreted this as
A robot can restrict access as long as it is blocks off less than half of the field, and does not extend across one or both scoring zones, cutting the field into two separate regions. *see note at end
to which you replied:

This is an interpretation that is consistent with the rules and the Q&A. It describes a legal strategy, but does not necessarily describe every legal strategy.

Thanks again for asking detailed questions in an effort to help everyone better understand this rule.

I’ll try to summarize these latest answers. Referees make a judgement call, and normal scoring robots wont violate the rule but walls might or might not. If they block off 2/3 of the area they are definitely illegal, but they could also be illegal even if they do not. If a robot blocks less than half the field, and does not extend all the way across one or both scoring zones, it would be legal, but there could be a robot that violated one of these and still be legal.

There’s obviously a lot of intentional ambiguity here, and I’m not sure why as it will ensure that referees enforce the rule completely differently across events, and leave teams in the dark about what they can build and what they might come up against.

This appears to be legal, as it does not violate either of the two conditions of taking up more than half the field or crossing both scoring zones. Assume the blue robots will try to enter the zone blocked by the red robot at some point.

*note I left out actively trying to enter the blocked region from the conditions, since the opponents could choose to do this at any point during the match. It also makes the logic less confusing. Otherwise legality = NOT ((taking up more than half the field OR crossing both zones) AND trying to enter) 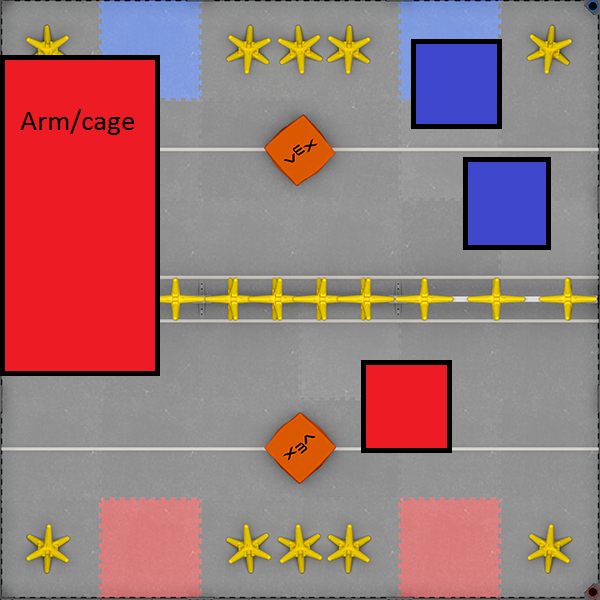 This appears to be legal, as it does not violate either of the two conditions of taking up more than half the field or crossing both scoring zones. Assume the blue robots will try to enter the zone blocked by the red robot at some point.

Are these conditions valid for enforcing this rule?
If the robot extended all the way to the back wall it would violate condition 2, would this make it illegal?
Could different referees be justified in ruling this robot both legal and illegal because of their own personal views on the matter?

Yes, the hypothetical you’ve provided does appear to be legal. There does not seem to be any pinning, trapping, or grabbing of opposing Robots.