Hello everyone, our team really wants to make our vex journal as descriptive and neat as possible. Since no one our team is a great drawer I was wondering if you guys have any CAD softwares you would recommend for Vex that are free.

I personally use Onshape, one reason I do is because it is browser based so I can access it anywhere I have internet. Second reason is because they already have a library of V5 parts to use. And third reason is because of how easy it was to learn and how user freindly it is.

I’d recommend using ProtoBot since it is made specifically for vex with vex parts already in the library and user-friendly controls. If you want to download ProtoBot, you’ll probably have to go find the thread for the download. There also is OnShape. From what I’ve heard, OnShape is pretty good too. I personally use Fusion360 because it’s the first one I learned to use and because it has some more advanced tools.

Hello! I’m happy to announce that the next update, Protobot Beta 1.3, has now been released and is available to download on Windows. Visit https://protobot.web.app to download Protobot Beta 1.3 for free! If you’re not quite sure what Protobot is, it’s a specialized CAD software specially made to use VEX parts to start prototyping and building virtual robots that you can later design in the real world. It’s designed to be easy to learn and intuitive for anyone who uses it. New Features And …

I personally use Onshape

here is a great tool for anyone to start using Onshape. 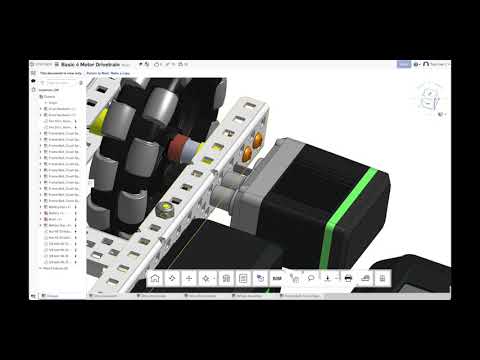 Edit: it doesn’t go over this in the videos but you need to press shift when attaching pieces to metal stock.

Fusion 360. It is easy to build with, but it also has a high skill ceiling.

Inventor’s a little trickier to learn, but is, in my opinion after having used multiple other options, probably the best choice to use for vex.

Lots of answers if you just use search bar.
Most professional CAD software has “free” (actually educational) licenses. Here’s most of them in this thread:
Best CAD Software? - #15 by kmmohn

I agree. Instead of going with onshape or proto it, which have their limitations. If you are still in school OP, I would suggest inventor. You can get ur education license for it and get it free

You can email Solid works and they will give you a free student solid works license.

I suspect that issue is very specific to you and not a feature of Fusion 360. Lots of teams build entire robots as well as far more complex things in Fusion.

OK. But…
A helpful reply would include what you found difficult, what spec your machine is and what you found as alternative.
Clearly the issues you have are not a specific Fusion issue but may help others when making their choices.

Sorry about that. Yeah I have an I5 9th gen with a gtx 970. I have tried fusion ok better computers, but even they seem to freeze up. It feels to me like fusion just does not like large assemblies. I’ve heard of multiple other people who can’t get past half of their robot or something like that bc it was too slow.

Speaking from years of experience using Fusion for VEX and school projects, Fusion is a great piece of software if you want to collaborate with team members on a design, working best if you have each sub assembly broken out as separate files. This is how I’ve used it and no other software (that I know of) has collaboration support like this. It doesn’t have real time collaboration but having everything saved in the cloud is a nice convenience, and all the extra simulation and rendering tools are handy.

That’s the only place where Fusion really shines though, it’s not the fastest or most reliable piece of software out there, and even on mine or my team mate’s relatively high end computers, it struggles significantly at times (most of the time in fact). It took a few minutes to even open Fusion on a school computer.
It loves to behave weird, crash randomly, bug out etc.
but at least it saves itself with automatic cloud saves