So on my bot, our main issue is the catapult. Although it works, it’s not nearly as accurate as we would like it to be. We also had to use four rubber bands, but I know @FRC973 only used two.

Here is a vid of what it is doing. ( this is what it does every time) Test 1 - YouTube

You see when the ball slightly goes back when the catapult is loading. It shouldn’t have that space to move. When the ball is in a different position, it can make it inconsistent. Try making the area where the ball stays smaller.

Nice, thanks. If anyone has any info on how some teams can do a catapult with less than four rubber bands I would be super grateful

If you have alot of torque in your robot the less rubber bands needed. I tryed this out but its not as good as you think it is.

I don’t do IQ but from what I can tell from the video, the ball doesn’t have the height to go into the goal(is that what it’s called?) Slow down the video and analyze the entire mechanism.

When you shoot a basket ball if you hit the backboard to hard the ball will bounce off of it. If the ball is given elevation then there is a higher chance of it going in.

Once again I don’t do IQ so my input might as well be worth nothing, but just from what I can tell it doesn’t have enough height.

First off, thanks for the video, it really helped.

So here’s my take on the problems and possible solutions.

I actually use between 2 and 6 depending on how stretched the rubber bands are, so it is fine to use more than two. It’s not the number of rubber bands you use, but the amount of energy that you store in them (i.e. the amount that you stretch them).

In the video, it looks like your motors are struggling a lot to bring the catapult arm down. This is for one main reason (from what I saw in the video). The gear ratio is too aggressive. If you are using one motor, I would go for a 4:1 gear ratio, and for two motors a 2:1 gear ratio is good.

Now to your original question, to get the balls into the goal more consistently, I’d recommend making your catapult let go of the balls sooner so they fly in a taller arc if that makes sense. Right now, it looks like the problem is that the balls hit the side of the goal (or go over), and this is because there such a small margin for error and inconsistencies. Making the catapult shoot at less of an angle (and more straight up) will make it so you have more room for error and might make it so you need less rubber bands. However, the goal is not necessarily to have the least amount of rubber bands, so don’t worry about it much.

As to how this can be done, the easiest way is to shorten the pieces that connect the gears to the catapult arm, making the catapult release sooner.

Overall though, it looks like a great robot. I’m looking forward to hearing how it goes. Good luck!

I’d recommend making your catapult let go of the balls sooner so they fly in a taller arc if that makes sense.

I was right *celebration dance

Sorry to take the subject off topic

So, I got the catapult arm about two pegs lower, and it was super consistent. (I did change the arm a bit to get it to work, but that was fine too) and I go back this morning and it’s back in the same rut of shooting about 5 inches too low. Don’t have a vid right now cause I’m at school, but I will record when I get home.

I have found that our catapult is very consistent when loaded, but breaks often when dry fired. We have reinforced the arms as best we can, but it really doesn’t like being dry fired.

Yeah I had that problem too. Take a longer capped pin, and it will probably do better. (It won’t break.)

That was the case with my original catapult too. I’ve found two main ways to fix it.

First, try doubling up the beams so there are two 1x beams where there was just one. Then use 0x3 (preferably brand new) pins instead of 2x1 pins because, at least in my experience, they are stronger. If you don’t have any new ones, steal some from the field (at the base of the plastic sheet in the orange pieces). Here’s a drawing of what I mean: 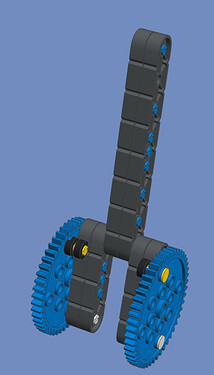 For me, just doing this worked fine, and it was fine being dry fired (although I still wouldn’t do it too much).

If that didn’t do it though, I would suggest putting the force on different pieces. You can do this by stopping the catapult with other, stronger, pieces just short of when it normally hits the top and the pieces breaks.

Something like this (sorry for the bad geometry, this was just a quick mock-up in CAD). The top holes of the two “arms” are supposed to be in the same hole as the top of the catapult beam, and they are supposed to reach their full extension just before the catapult one connected to the gears does: 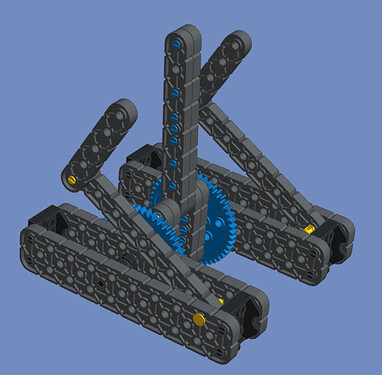 Good suggestions. I will show the students and have them explore ways of making it stronger.

Finally, here are the videos Nice job on the improvements from last time. It looks like it has a lot of potential to get it in the goal.

It looks like you just need to make your shot more powerful. This can be done by adding another rubber band or two. It is important to keep in mind that you will need to adjust the rubber bands regularly, especially at first when the rubber bands are first stretching. After you break them in though, especially if you store the catapult up, you won’t have to tune them as much.

Repurposing an old thread here, my new bot is having some slight accuracy issues, it shoots far enough, but the balls never both make it in.