They ended up not even winning Excellence nor Design Award. Even if another team was more well rounded(which the team who got excellence was not) and rightfully took excellence, they would at least get the design award with their 3 notebooks. Instead, a clawbot team took design award. I’m not saying the other teams were bad but it is really hard to believe two teams could beat our sister team’s notebooks especially when my team were able to scrape a design award with only half a page of notes.

This may have been a judging screw up but how ignorable is a 3 notebooks worth of engineering notes?

I would like to hear reasons why this happened and your opinions on this matter.

I think the most likely explanation was simply a mixup between you and your sister team tbh. Probably pretty easy for judges to confuse a single letter, and give it to you instead of your sister team on accident.

@Xenon27. I’d doesn’t appear they were in the same division. It is possible that the elementary division was just more competitive than the middle school division. I feel on like it would have been more fitting for the judges to just not give a design award.

well in that case the judges must have been blown away by the font you used to title your half a page of notes. I see no alternative explanations.

(but to be serious, your sister team was never in competition with you in terms of design award, so it could be possible that you did indeed have the best/only notebook in your division, in which case you would be the logical winner of the design award, as odd as that might be with a half page of notes)

A very small number of teams have sent notebooks in for my region in all divisions except VRC HS. Judges do often weigh the interview more than the notebook. Judges also often consider feedback from other tournament administrators (referees, TM operators, EPs, and others) when making decisions, especially those whose poor behavior would not represent the region well at the next level.

My point being, there are a number of reasons that your sister team would not be selected and you would. Without more data, I wouldn’t consider it too strange this season.

Imagine making a forum thread detailing why your team didn’t deserve to win a prestigious award at States.

Not the first time I’ve seen this. hang around for a while.

It could’ve been your teams behavior, or something else you did. Sometimes, awards work in wierd amd mysterious ways.

Except by the definitions in the Judges’ Guide, that notebook should have been considered a “developing” notebook and not be considered for the Design award. 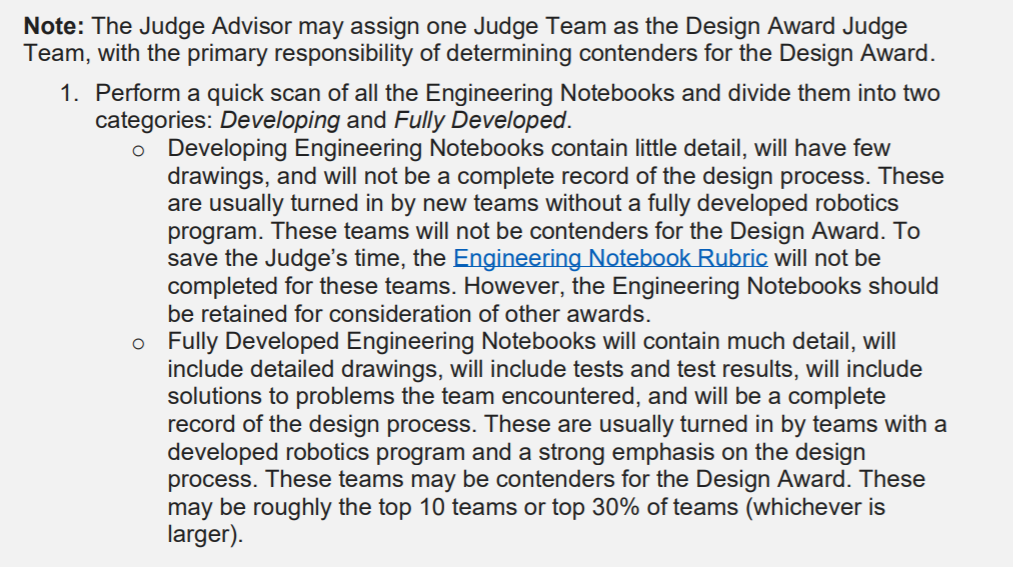 The sister team might have been matched up against two other elementary school teams with outstanding notebooks as well, and maybe those teams did better in the interview than your sister team, so I don’t think losing with three entire notebooks is necessarily controversial.

For the sake of argument, I’m going to have to assume that your team nailed the interview, an interview that your team technically shouldn’t have gotten. In which case, I personally think the better display of gracious professionalism would be to contact your Regional Support Manager and settle this in private instead of letting it up to the speculation of the Internet.

It technically might be possible that your team actually had the best engineering notebook in your division, in which case, technically no team should have received the Design Award. I know that’s technically possible according to the Judges’ Guide, and I’ve heard of it happening a couple of times once this topic comes up, but I’ve never seen that happen in person.

The awards also depend on the ranking of your robot in the competition so the teams that did get the excellence and design award might have ranked better than them.

As you were in different divisions, you can’t really compare the two. I’ve judged a handful of IQ events and though their notebook looks great from that excerpt, its possible that they absolutely bombed their interview or that there was another high scoring notebook or two that fit better for the awards. It’s always hard to lose an event, but it looks like they work hard and I hope you all have better luck in the future!

Excellence is the only award that is both a performance and judged award. This means that judges take into account the prospective teams’ engineering notebook, judges interview, qualification ranking, and robot skills challenge ranking when determining the recipient.

Design, on the other hand, does not depend on the team’s performance. As a matter of fact, a team could be ranked dead last and still win the design award.

Excellence is the only award that is both a performance and judged award. This means that judges take into account the prospective teams’ engineering notebook, judges interview, qualification ranking, and robot skills challenge ranking when determining the recipient.

Design, on the other hand, does not depend on the team’s performance. As a matter of fact, a team could be ranked dead last and still win the design award.

Not quite true. A judges award can take anything into account and in my region is often used a 2nd place excellence. Also, other judges awards take both things into account. For example, Think award take both programming skills and a teams ability to explain sensor use.

For example, Think award take both programming skills and a teams ability to explain sensor use.

As quoted from this season’s judges guide:
“The Think Award is presented to a team with the most effective and consistent programming strategies and solutions to solve the game challenge. Key criteria:
• Participation in the Programming Skills Challenge is required (does not apply to VAIC-HS or VAIC-U)
• Autonomous programming is consistent and reliable
• Programs are cleanly written, well documented, and easy to understand
• Team clearly explains the programming strategy used to solve the game
challenge
• Team clearly explains their programming management process, including version
history
• Students understand and explain how they worked together to develop their
robot programming”

No where in this is a team’s robot skills ranking mentioned (which is what I meant by robot performance). By robot performance, I was referring to a team’s qualification and robot skills challenge ranking. As a matter of fact, there has been controversy over the qualifications of the Think Award (I do not wish to discuss this;the topic has been beaten to death. If you wish to learn more, please see these threads: Award Confusion:Why would a team with 0 autonomous win the Think (Programming) award? & Unfair Judged Awards at Worlds? - as a matter of fact, these threads beg the question of how much a robot’s performance weighs into the Think Award).

I looked the the judges guide and I think that the Amaze award includes both performance and judging. Emphasis is added in bold.

• Robot design is consistently high scoring and competitive
• Robot construction is high quality
• Robot programming is effective, successful, and
consistent
• Students understand and explain how they worked
together to develop their robot

It doesn’t take into account qualification or robot skills rankings. As per the judges guide, it isn’t:t a performance award (all other performance awards except for the excellence award have no judging aspect to it).

Rankings in the competition don’t play a role in the Design Award.

We have always considered the Amaze Award to be the team next in line for the Excellence Award that wasn’t given the Design Award.

Yes, I wished more teams would add Amaze Award to their list to do just this. Then Think because that’s code and performance. Then Design.

I agree. I have only ever had the opportunity to compete for one of the other notebook award once. That was back in 2019 though and I didn’t really have a competitive notebook. None of the local events in Kansas ever have them.