Out team has some spare cortexes and we have an old T-shirt cannon that needs some upgrades (redesign). It would be great to be able to adopt the Cortex as a brain for that purpose, but the range on the Vexnet keys is not long enough. The existing controller is old FIRST hardware using serially connected radio modules. I inherited the cannon and don’t have the knowledge, or software to program the old controllers. Is there any way to use something different in those USB ports, like a USB WiFi adapter for example, to give longer range?

I have seen some battlebots teams like Bronco using special orange colored keys that seemed to have longer range. Maybe @Jon_Jack can comment?

I am unaware of there ever being any kind of special extended range VEXnet Keys.

The only way to get a longer range is to put them up on top of the robot. I had USB extender cables to allow that to happen.

As far a color, the STEM Robotics loaner keys were painted purple on one end to keep them from becoming “lost”.

Strange, Bronco definitely used orange colored vexnet keys, which I would imagine would have to be higher power in order to maintain a connection through all that metal. Here’s a picture in which the orange key is visible: 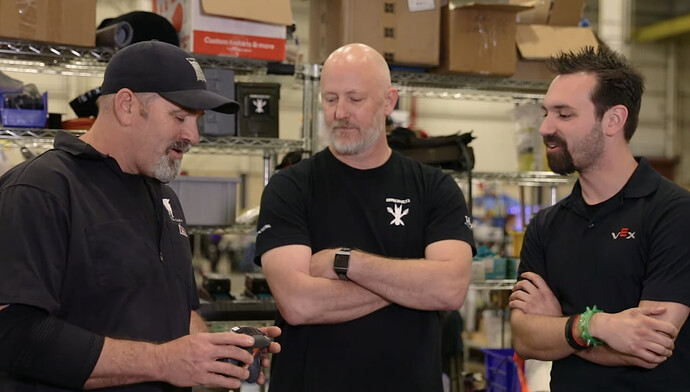 Nice find… I’m having a Mandela effect moment, zero memory of seeing that orange key. If you hadn’t pulled out that interview I would have said the same thing that @Jon_Jack did, I feel like I distinctly remember their Joystick/Cortex just having (clearly custom-made) wires coming out of where the keys would normally have been.

My understanding, based solely on my own observations that day and not on any “insider knowledge”, is that the radios they used were heavily modified by the Bronco guys. Like, to the point where they barely even qualified to be called “VEXnet” anymore, more like hacked to be a regular RC transmitter/receiver with a better form factor. (the vast majority of Battlebots use old-school pistol-grip or RC-aircraft-style transmitters, there weren’t really any “video game console” form factor options like the VEXnet Joystick until fairly recently)

So, I don’t know what these modifications were, but they may have replaced it with their own housings at that time, or colored the plastic themselves to differentiate from standard keys. Battlebots teams have a habit of not using anything “off the shelf”… sorry if I deflated any theories about secret products with a slightly “stretching the truth” interview, but can you blame the marketing guy for taking the opportunity to show off the hardware?

Edit: Alright, that was seriously bugging me so I went hunting. The “weird custom wire coming out” version was seen in this interview from the year prior to that one. Still no idea what it actually does, but at least I know I’m not crazy…

Perhaps it may be possible to use the analog/digital/serial ports to transfer data to the Cortex with an arduino or raspberry pi, utilizing wifi on them to remotely control the Cortex anywhere in the building. Or, of course, you can use the raspberry pi to receive/transmit radio connections with a non-VEX controller

Totally possible. As part of this robot

Here is a reveal and explanation of Vex U team WPI1’s completely autonomous robot that we competed at worlds with. We did about as well as we had hoped, winning one match and being competitive in around five others. Thanks to all the people that came up to our pits asking questions or taking a picture with us after a match. I was happy to see that people are interested in advanced programming and liked the idea of a robot driving itself. I can certainly say that I much preferred the robot drive …

I would regularly connect to the robot’s onboard raspi to change things even when I was doing a semester abroad in Hong Kong. So Hong Kong → Massachusetts driving would have been very possible, just well, awful.

Don’t think it would be fast enough per some comments in an old thread on a similar topic, where jpearman chimed in.

Edit: Alright, that was seriously bugging me so I went hunting. The “weird custom wire coming out” version was seen in this interview from the year prior to that one. Still no idea what it actually does, but at least I know I’m not crazy…

Kinda looks like a cut-off ethernet cable on the competition port: 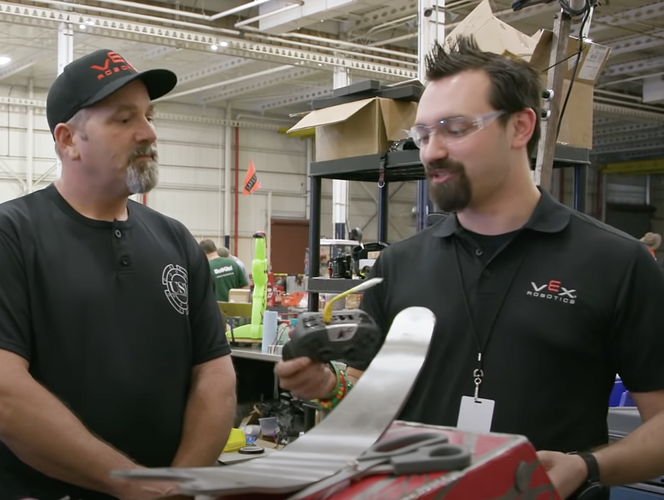 Is it possible that cable is wired like an enabled competition switch, so that the radio switches to the competition-only channel, in case there’s less interference on that channel in the venue?

I want to say that I was so excited by the VEXIQ V1 boxes. It turns out that with some level of code you can attach any device to the brain. Yea, the connector is a pain, but you can either fab your own or make change overs. But to some level it’s an agnostic system. And more excited with the VEX HEX bug series of plain DC motors that with a little cable magic your standard Adafruit can drive your robot.

This is a huge deal. World class mechanics, with a stock brain or BYO brain. A game changer. Remember the 0.5, you could add stuff to that. And to some extent the Cortex could drive PWM and get data back. VEX/IFI is the new leader in advanced user friendly expansions!!!

Until the launch of the V5. Nothing out of anyone else’s box. And it appears that the new VIQ(v2) is also locked. So I have a huge box of Cortex motors that I can drive via three dozen computers/controllers and interface into an dead simple system. But past this, it’s a walled garden. I know why VEX does this, but it does not make me happy.

I’ve not moved to VIQ (v2) because there isn’t a value added. Yep, cool plastic by Art and the team, cool colors on the display, but closed garden isn’t a buying decision.

We use a dongle like that at our championship even at Auburn university. I have the pinouts around somewhere. All it does is prevent channel hopping IIRC, once the connection is established. They do it to try to help with the disconnects that are common there during competition. I bet that’s all that dongle is.

As much as you are correct, the objective is likely not so much about speed since the environment is to be utilized in a non-competitive manner (as they are trying to make a T-Shirt cannon). The primary objective is range. Likely all that is needed for okay control will be around 10Hz which should not be too hard to accomplish.

I want to say that I was so excited by the VEXIQ V1 boxes. It turns out that with some level of code you can attach any device to the brain.

And it appears that the new VIQ(v2) is also locked.

In terms of connectivity to external devices, IQ Generation 2 has more options than generation 1 had.

Generation 1 had some capability to use I2C to control non-VEX devicies, the limitation was that the devices had to play nicely with the I2C enumeration that we use to allow three devices to share each I2C bus.

Generation 2 improves on this by allowing reconfiguration of the four corner ports (1, 6, 7 and 12) in various ways. Generic I2C is still allowed, but as these four ports each have a dedicated I2C bus, the devices attached don’t have to play nicely with VEX devices.
The ports can also be configured for full duplex serial communication with logic level signaling (3.3V). They can also be configured as raw digital IO, two digital outputs and one input. Simple bit bang protocols can be implemented fairly easily.