I wish the 36" rule was “Had to fit inside a 36” circle. That would have made life a little easier vs the diagonal that we need to do. And while I appreciate the “nuance rules” getting less of a nuance and more of a hard fact, I’m not thrilled with the size rules getting changed 6 months in. I’m going to assume that people saw this as an issue in Aug, having it wait until Oct to come out isn’t the best.

Having got that off my chest, when will the ref certificate training material be ready? I want to run scrimmages and I want to make sure they run pretty close to matches.

have to fit inside a 36" circle might be an easier concept to grasp, but I think the current rule is better for practical reasons.

it would be very difficult to side a robot with a 36" circular sizing tool, or any other means. but identifying points on the robot that are farthest apart, and using a tape measure or the 36" sizing tool between those points is a lot easier for inspectors, and for students to test.

also, I’m curious, what rule about sizing was changed 6 months in? I just checked and I see nothing different, or anything in the update notes.

size rules getting changed 6 months in

Could you clarify?
I looked back at previous versions and the SG2 expansion size rule appears to be the same in the 10/6/21 game manual as listed in the 6/29/21 game manual. The 5/22/21 game manual has the same wording as well, just without the picture and notes.

I am also confused by what you mean. From what I can tell the wording of SG2 has remained unchanged since the game manual’s initial release.

Also, having the rule changed to be a 36” circle would probably make things harder, not easier. I explained why a few months back in a post about SG2:

Also tagging @kmmohn. That’s not what the rule says. Let’s take a look at the rule again: Once the Match begins, Robots may expand, but no horizontal dimension can exceed 36” (914.4 mm) at any point during the Match. There is no mention of a circle in this definition, because the expansion limit is not (necessarily) a circle. For example, let’s think of a simple shape, say a triangle with sides of length 36", that does not violate this rule but would not fit into a 36" diameter circle. Her…

In short, yes to everyone above, it’s to make things easier to measure in inspection and on the field.

It was more of the pictures and the notes for two teams. They were good on the front to back, it’s the diagonal that is the issue, and actually its the lower left back corner to the upper right when the arm is extended,

@GBHS_VEX_Member thanks for the link, that makes sense on whats going on.

sigh - yes, it appears that it is 36" diagonal measurement. Which would be easier to say in a circle.

So, the picture, in my opinion does more harm than good. How can this expansion be both legal and illegal? 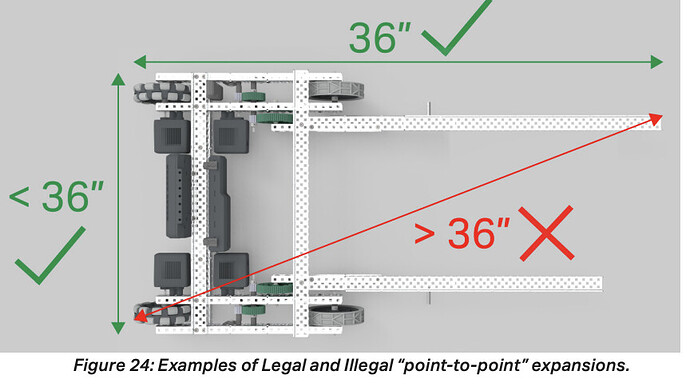 it is 36" diagonal measurement. Which would be easier to say in a circle.

Those aren’t the same thing. An object that fits within a 36" diagonal measurement will not necessarily fit within a 36" circle.

How can this expansion be both legal and illegal?

I agree that the wording in the caption is confusing. The picture illustrates a robot that is illegal. Even though the width and height are within 36", the diagonal is not, so it is not legal expansion.

They are different specifications. One is for starting size, one is for expansion size.

Those aren’t the same thing. An object that fits within a 36" diagonal measurement will not necessarily fit within a 36" circle.

Good point. Small differences, but it would be easier to understand. IMO

I agree that the wording in the caption is confusing. The picture illustrates a robot that is illegal. Even though the width and height are within 36", the diagonal is not, so it is not legal expansion.

Right, to be clear, it should just say that “This is an illegal expansion”

They are different specifications. One is for starting size, one is for expansion size.

Understand, but again it’d be easier to be consistent on how to measure your robot.

would be easier to say in a circle.

it would be easier to understand.

I really don’t think it would be. In that case, the only feasible way to measure if a team is in size is to physically place the robot in a box the shape of a 36" diameter circle. Ignoring the headaches this would cause for EPs (doesn’t sound fun to spot check with a giant circle), most teams would not have such a box, and would be forced to use something linear, like a tape measure. Say such a team’s robot looks like this: 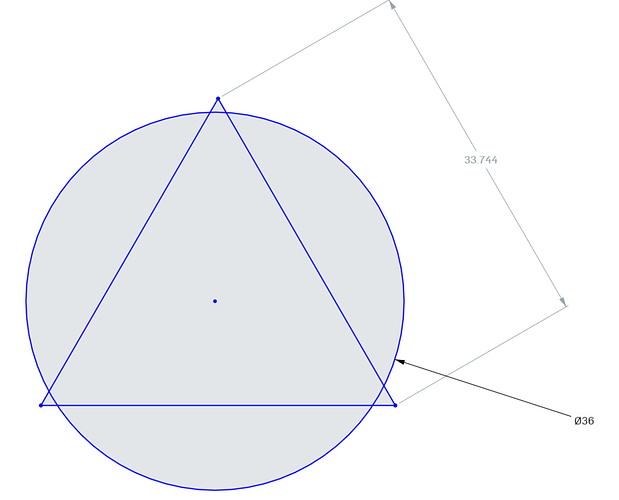 image1013×817 57.9 KB
Any horizontal measurement from a tape measure is going to end up a few inches short of 36", so the team thinks they are good. However, when they get to the competition their robot fails inspection because it doesn’t fit inside the circle.

Understand, but again it’d be easier to be consistent on how to measure your robot.

Again, I don’t think this would be easier. It already gets somewhat difficult to measure 24"^3 VEXU bots at inspection, and measuring a 36"x36" robot of unlimited height would be even more difficult. It would also make “spot checks” very difficult or impossible depending on the field geometry that is present around the robot. Additionally, I don’t think it is the GDC’s desire to allow robots that are over 50" long in this game, as it would significantly increase the ease of defense in an already defense heavy game…

It’s worth noting that this isn’t a new rule that the GDC wrote up from scratch for this year. It was present in the last two games with a horizontal expansion limit, In The Zone and Turning Point, with nearly identical language. The rule is written this way because it makes it easy to verify if a robot is in size.

They were good on the front to back, it’s the diagonal that is the issue, and actually its the lower left back corner to the upper right when the arm is extended,

Just to be clear, when you say “upper” and “lower”, you are not referring to vertical directions, correct? The rule only stipulates the limits of robot expansion in the horizontal dimensions.

So, the picture, in my opinion does more harm than good.

This I agree with. By the caption, the diagram is showing both legal and illegal expansions of the robot. The arm in the upper right corner is labeled as legal with a green check in the top of the image, but at the same time is labeled as illegal with the horizontal line. This is very confusing. This diagram needs to be broken into two separate diagrams, one showing a legal configuration and one showing an illegal configuration. Additionally, dimensions should be marked out with neutral black text instead of green, and the legal/illegal condition should be marked with a colored line and symbol. @Jon_Jack do you think there’s any chance the GDC could clarify this diagram in the manual to reduce confusion?

I think it means that size is measured parallel to the direction of expansion. So expanding in a diagonal direction would result in the robot being measured fiagonally

@sazrocks OK, the more I think about it … I agree with everything you said. I’m probably just reaching for ways to make it clearer and it comes down to the diagram that is in the manual that is the confusing part. It should be as simple as showing a picture of a robot that is legal and one that is illegal (instead of trying to combine them into one.

Use the sizing tool.

The furthest two points on a projected horizontal plane have to be <= 36". Thus the 36" sizing tool should be used to measure the robot, holding the tool perpendicular to the floor, but at any angle parallel to the floor.

An 18 x 18 inch robot should have about 13 inches of additional length (18 x 31) if the extended corners are the furthest points. 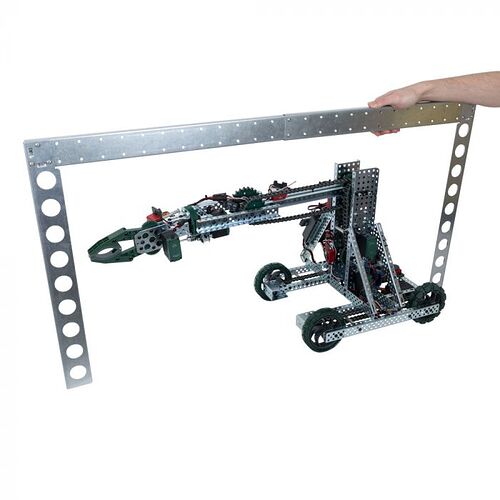 No, there is NO measuring diagonally. If you look at the robot from straight over head and project the robot onto the plane of the flat surface it is sitting on, there should not be two points that are more than 36" apart. Any sizing measurement for the 36" limit is done parallel to the surface that the robot rests on.

By upper / lower I was looking down from the air to the floor as a picture and was lower left to upper right as a direction.

For those who are still confused about it not being a circle, here’s a group of shapes that all satisfy the 36" limit rule while not fitting within a 36" circle. These are all known as shapes of constant width. 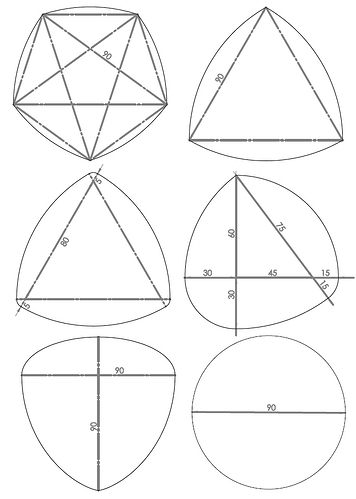