Found this flywheel weight from this fourm post talking about flywheel weights in VEX IQ. Was wondering if anyone has experimented with creating a VRC equivalent? Are they even worth pursuing?

I think that for spin up this year most robots would have their flywheels running throughout the match, especially if teams use turrets that autoalign to the net. The low spin up times that light flywheels offer arent as advantageous since a heavier flywheel not only stores more energy but also is more efficient since once its spinning minimal energy is needed to keep it spinning.

Although you could just spin the flywheel faster, there will be an upper limit for how fast you can spin it since the more gears you add the more friction will be generated in spinning the flywheel. Flywheel weights seem like the way to go if you want to save a motor since you could just use one motor and deal with the long spin up time.

Well, in engineering terms, no… Power is usually given in Watts. So the power of the flywheel is equal to the wattage of the motor that drives it, about 11 watts per motor. What you decide to do with those 11 watts of power is up to you. Changing gear ratios in your motor affects torque and a speed inversely. The combination of which never gives you more power.

So where does weight on the flywheel come in? This deals with another property called inertia, or in layman’s terms the ability to “not respond to changing situations”. Adding weights to the flywheel will make the flywheel more consistent (not more powerful), the consistency being that every time a disc is launched the flywheel will slow down less because of the extra inertia from the weights.

If an advanced team wants to score more bonus points with judges, calculations of inertia with respect to weight location and radius from the center of the flywheel would be impressive to see in your engineering notebook.

That is what I meant by more powerful, sorry if that was unclear.

That is what I meant by more powerful

No need to apologize, I knew what you meant, but as an engineering educator I thought it would be appropriate for the rest of the VEX Community to help understand proper terminology.

I don’t quite understand the reasoning for flywheel weights, considering that you can only really shoot 3 discs at a time since that is the limit. Unless your system is efficient enough such that the disc on the ground is right after the 3rd disc on your robot, I feel like a flywheel weight really won’t add much. On another note, when you add weight to a flywheel, you will find a very very slow spin up time which will mean you won’t be able to shoot for the first 4-5 seconds of autonomous, or something of the sort.

Note: I am assuming you are doing a 1 motor flywheel

I don’t quite understand the reasoning for flywheel weights, considering that you can only really shoot 3 discs at a time since that is the limit.

The extra mass reduces the delay between disc launches. A half second between each launch adds up quick.

Yes, although giving the flywheel more mass (and therefore it’s rotational inertia) does make it harder to accelerate from rest (as per Newton’s 1st Law), it does make it better at responding to external forces (in this case the feeding and shooting a disc). This is how many teams in NBN were able to get really consistent full-court shots, alongside having accurate velocity control. 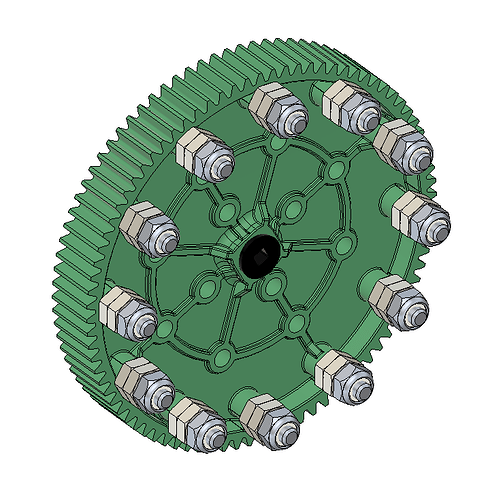 I believe it would be more effective to bolt square steel plates onto your gears instead of adding nuts and screws. This would also keep it compact.

A big issue that you’ll find with added weight is added friction. Make sure to have structural supports on both sides of the flywheel, and use petroleum jelly or graphite on your contact points.

Few comments on your post and the pic you quoted…

The most efficient use of mass is on the outer part of the rotating item, like the bolts/nuts shown. Mass in the center has proportionally less effect with inertia being proportional (in this case) to mass x distance from the axle.

From a safety standpoint… this looks like something that’s a BAD idea. This will remove skin rather quickly if you get your finger in there.

And from a reliability standpoint… this pic looks like the weights are going on the driving gear in a 5:1 or 7:1 (too lazy to count teeth) setup. This will GREATLY increase inertia of that gear.

Problem is… when the flywheel encounters a disc launch, the large inertia of the driving gear will probably 1) strip teeth off due to a battle between inertia and lack of mechanical advantage to apply this stored power 2) bend shafts 3) cause gears to skip.

In short, put your extra mass on the flywheel itself. Write some code so you can tell exactly how long it takes for the flywheel to come up to speed and regain speed between launches. I’d suggest finding my ‘flywheel quantitative analysis’ thread.

Flywheel weights indeed have some benefits, the weight has more stored energy causing it to have more power when yeeting the disk. Although it has some drawbacks as well. First of all: since it takes longer to spin up meaning if the weight isnt enough to prevent it from slowing down then you might have even longer shots per second (i haven’t tested this so i don’t know if the disks will even slow down the flywheel enough though). Secondly, I don’t know where you got the idea that more weight = more efficient. If identical engines in a small sedan and a bigger heavier minivan then observe the MPG wou would see that the sedan would have a higher MPG because its lighter and using less energy to power. Same thing goes for flywheels. The added weight would still require more energy to keep spinning. You might be confused with the time it takes for it to slow to a halt while free spinning because it might take longer for a heavier flywheel to slow down than a lighter flywheel but that is because there is more stored energy in the heavier flywheel, but it also requires more energy to maintain its speed. (Im not saying weighted flywheels are a bad thing im just saying there are potential drawbacks. But honestly you should test yourself to see what works best for you)

the sedan would have a higher MPG

FTFY. MPG stands for miles per gallon, which is the opposite of how much gas it takes to go one mile. The more miles you get per gallon, the fewer gallons (battery power, by analogy) each mile uses.

Oops my bad mixed it up, edited the comment thanks for catching that

Unless you’ve got a really bad friction problem, the energy required to keep it spinning at a high RPM is mainly due to wind resistance losses.

This is independent of energy required to accelerate… which I think we’ve all got a good handle on.

our school has many VRC teams and something interesting I’ve noticed is that nobody is really using flywheel weights at all, even though we bought the official weights from VEX. robot reveals don’t also seem to show flywheel weights being used. maybe it wasn’t worth it after all?

just as an update, our team is gonna try out a single motor with the 3600RPM cartridge flywheel and test how well that goes, otherwise we will just switch to a catapult

good luck to your teams in spin up!