Does the GDC work on multiple games in the future at one time or do they work on the next years game throughout the season? Some friends of mine have the theory that the GDC has upwards of 3 games “saved up” so they can perfect them for multiple years before releasing them.

Just a question that popped up in my head.

Yes, the GDC has multiple games in development at a time, around 3. for example, this year’s game was started about 2-3 years ago.

Hmm. Thats weird to think about.

Whats weirder is how those games don’t get leaked.

Game ate developed 2 years in advanced. So when Turning Point was released the plans for Change Up were already being concocted.

And yes, games have been leaked in the past.

Games usually go through multiple iterative cycles to balance the multiple way of scoring and to perfect the game elements.

I was aware of the spin up manual thing, but it’s pretty amazing that some random person doesn’t just come on the forum anonymously and post pictures/manuals.

The GDC likes to keep things under tight wraps until the appropriate time and date. Even still you’d be surprised how much damage control the forum admins had to do leading up to Change Up Worlds.

but it’s pretty amazing that some random person doesn’t just come on the forum anonymously and post pictures/manuals.

but it’s pretty amazing that some random person doesn’t just come on the forum anonymously and post pictures/manuals.

And money in your bank account. NDAs can be pretty strict with these things for individuals, and suppliers would stand to lose the business of being able to turn out the parts.

Honestly where I think the most likely leaks would come from is the factories in China where the elements are made and shipped from, but clearly they’ve overall got good control.

Or have any sense of honesty. I would never leak my siblings’ birthday presents.

Or have any sense of honesty.

You might be surprised by how much a driver ego is for some people, enough to divulge information they shouldn’t because it makes them feel important. That’s why penalties like loss of job, financial hits, or in the case of some NDAs - jail time, are needed to deter different types of people from leaking information.

it makes them feel important

I know some people with whom withholding information makes them feel important. But there definitely should be penalties for letting it out.

Door bangs open, boots and shoes shuffle on the floor.

Voice1: Whats today?
Voice2: Brisket I bet that’s Soulmans.
Voice3: umm and is those pies?
Voice1: Ohh baby, Pie Shop time!
Voice4: Cherry and chicken and pulled pork < redacted> went all out
Voice5: Banana pie.
Voice6: Love me some Mary’s Pie
Voice1: Hard to not love Mary’s Pie
<< shuffling and snorting sounds >>>
Muffled: This pie is the best, love that bbq flavor
Muffled: Yea and good luck getting all that bbq out of your shirt
<< pause >> << sounds >> << pause>>
Voice2: So one of my relatives have been talking about disc golf, it’s the sport in both summer months up north.
Voice4: Yea, my kid got a 4" one and all they do is smack the animals with it.
Voice5: Did you just take thirds on the banana pie?
Voice1: No, so flinging disks at stuffed animals, is that a game?
Voice2: No disc golf
Voice6: Oh, you mean with that chain thing in the park?
Voice2: Yea, they just toss it in.
Voice5: But smaller, like redacted kids name has?
Voice4 :Yea, but they can hit animal name from 12’, great aim.
Voice3: Sounds great. Looks like we have a game.
Voice6: Dude, did you eat the last Mary’s pie?

Let see if I can help continue this list

Sack attack was leaked because the vex store at worlds sold game elements a couple days early. 2 teams got kits and vex requested to hold onto them until reveal when they found out.

There was definitely another I can’t remember right now.

When tipping point was leaked there were tons of memes about it that got deleted, but were returned after the game reveal. You can see all these memes starting around after post Dankest Vex Memes? - #2832 by Ethan5956F.

There was definitely another I can’t remember right now.

Was it Ball Battle? 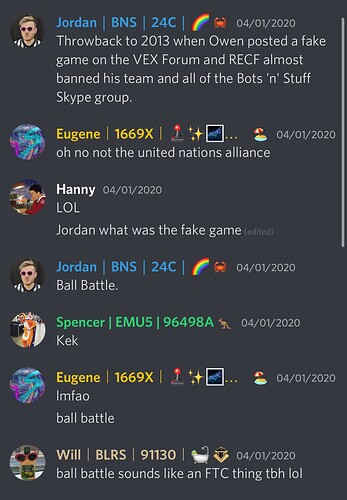 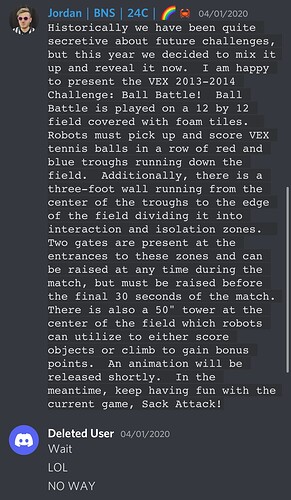 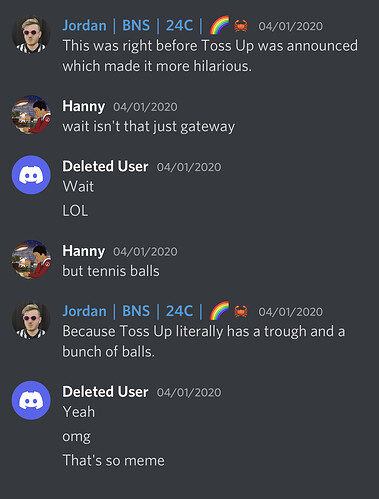 Sure… NDA’s and “consequences” can help discourage someone from leaking details of a game… but those consequences really don’t come into play if the details are leaked anonymously.

I suspect the real reason that you don’t see any significant leaks is that the people who are involved in organizing these events are ethical, trustworthy folks who would feel awful if they ruined the surprise and suspense of the “game reveal”.

I prefer to credit the lack of leaks to the honesty and integrity of people, particularly those involved in the educational robotics community.