I’ve never had a VEX before so I decided to get the second generation VEX IQ education kit. So my son built the clawbot, which was very disappointing.

First of all, maybe this is a settings issue, the bot moves and stops very suddenly as you actuate the remote. So it’s very hard to fine tune the orientation or inch it. I’ve never controlled a VEX IQ before but if the joy stick control routines are not good enough, it would result in such jerky motions.

Next, the arm is very very shaky. If you attempt to turn the bot, the claw just shakes from side to side, maybe due to the flimsy plastic beams and the design of the bot (designers just didn’t know physics). Anyway, not a good way to go about clawing things.

Third, this may have something to do with the tennis ball we’re using because we don’t have any balls for competition. The claw is too high to grab even when it is lowered all the way down. Also the claw tends to open up every time they touch each other or the ball. It’s not getting loose, but rather it just opens up like a designed response to torque going over a limit. So even if we feed it a ball, we would have to hold the button down to keep the claw from opening up.

Lastly, the motor that runs the arm up and down heats up to an uncomfortable temperature and whines audibly (the gear ratio inside the motor may be too low to provide sufficient torque). If you keep the arm up for a whole, then the heat from that motor burns your fingers. I’m not sure if it is supposed to be like that. Charging the battery also creates a very hot spot at the charging port, making me wonder if they designed the charging board with sufficient trace thickness and width to handle the charging current.

Overall, I’m disappointed at the quality. I wish there were a similar clawbot design to gen1, which looks like it works (seen once in a mock competition).

I considered buying the competition kit later for $200 but with such weak motors, jerky control routines, and bot designs, I wonder if it’d be a lost cause. Anyone sharing successes or tricks would be appreciated.

Would you be able to share pictures of what you built?

Lets me just say this, We build robots that can hang on that 100 rpm motor. Its not a vex issue, please send pictures. you may as well built it wrong.

I’ve checked the bot against the instruction. There were only minor errors that I corrected. The locations of the cable “tie” didn’t make sense if you actually built it yourself so I moved them where they are better off. If you have a gen 2 that happens to have been built as a clawbot, you could turn it on and try the arm up and stay there for a minute and touch the motor. The way the design was made indicated the designer of the bot (not the hardware) knows very little physics or lever arms specifically. The arm is way too long and the end of it too heavy with a claw motor.

I don’t understand your “hang on” and “100 rpm” statement. You sound very certain without a doubt it’s not a vex issue. Were your claims based on the gen2 that just came out?

Some photos from various angles (the claws are probably off by one gear tooth): 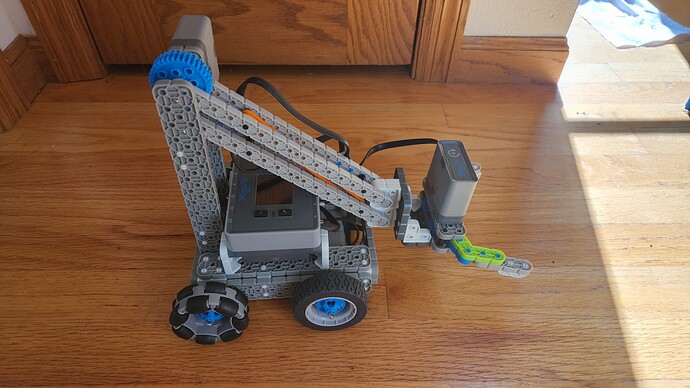 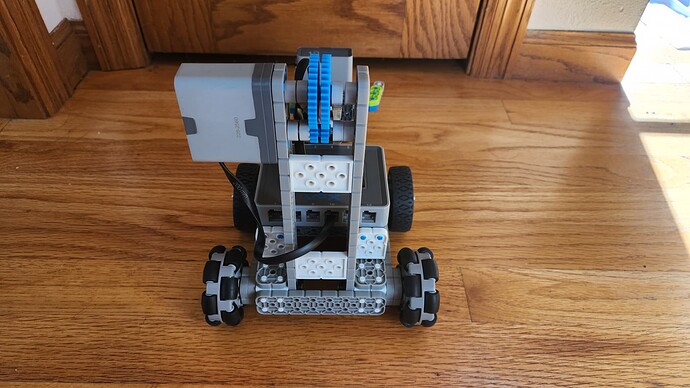 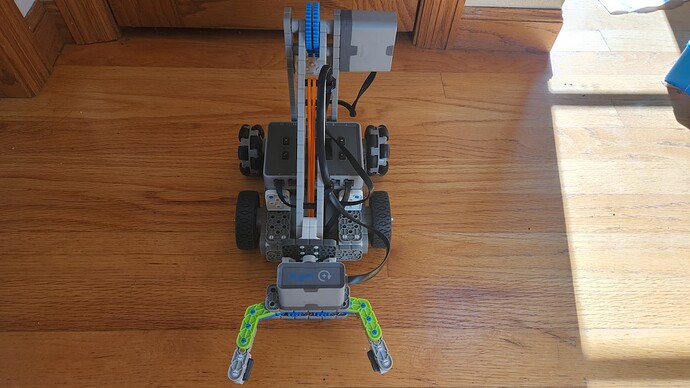 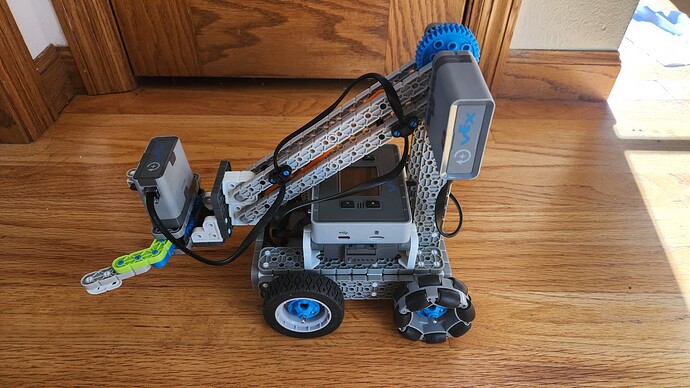 The Clawbot is a starting point, not a perfect finished build. It uses a small percentage of the structural parts in the kit. The robot is a trainer that is there to give you ideas. You are on the right lines though, so can you improve the bracing?
The arm motor will be in hold mode, it is always working to hold the arm in the position you move it to. This draws current all the time so it’ll get warm to the touch, but not in a way that’ll cause a problem. You can always write some code to turn hold mode off though.
As for the jerky movements, seems odd. The joysticks are analogue and you can drive the motors very slow, just a couple of RPM if desired. Can you post a video of the movement issue?

Thanks. We’re just starting off so we don’t have our own designs of anything. So if the clawbot actually worked well enough, that would provide some excitement and serve as a starting point for our own design. Unfortunately this very design is simply not working. The long arm and heavy claw at the end of the arm creates a lot of torque, especially if the arm is level. The motor has a small level arm provided by the large gear’s radius. The arm is so long that turning the bot around causes a lot of vibration. I removed one piece from the side of the controller that holds the arm because I could go lower without that piece. It does help stabilize the arm when it is at a low angle near the ground.

I’m guessing I need to recalibrate the controllers to see if the dead zone for the sticks is too big? The “Drive” program doesn’t seem to allow me to use a stick to control the arm.

I’ll get a video.

for IQ generation2, it’s not, only the arm motor (or more correctly the motor controlled by L1/L2) is set to hold. The Drive program is a very generic program and was designed to match the equivalent code in IQ generation 1, it has limited functionality.

I had posted a simulation (meaning that a user program does not have access to settings made in the UI that affect the Drive program) that can be used as the basis for improvement here.

A while back I wrote some code for the IQ 2nd generation that simulates the default drive code inside the brain. It’s not possible to completely simulate the code as some control and motor reversal is done through the control screen for that code, however, those same changes (arcade, tank drive etc.) can be made by modifying the examples. I have the same example in both C++ and Python, you will notice how similar they are. They are not fully debugged, but I though I would post the two VEXcode…

There are also many examples included with VEXcode.

Thanks. I’ll look into the code. Won’t be too hard to read I hope. So like I suspect, if the R1/R2 controlled motor is set to hold, then the ball will not drop after I let go of the buttons? I’ve never played with these things before but my son told me that in school the gen1 clawbot holds on to its claw so maybe gen1’s tank drive code has hold for the claw?

I am curious. What if I purchased the $200 competition kit upgrade to add to my education kit? Will I be able to follow the gen1 clawbot instructions to build that bot instead of the gen2 clawbot that was probably designed in a hurry?

Also, what would be a good substitute for a ball used in competition?

With the arm, holding mode makes sense given the use case of this motor. What you might like to do is explore how you can add assistance to the lifting/holding of the arm. The arm already contains elastic bands for this purpose so look into how you can increase the assistance they provide. Remember, what goes up must come down, so the more “up” assistance you provide, the more “down” work the motor will have to do. It’s a balancing act.

Providing a perfect robot is not the aim of the basic models. If it was, there would be nothing left for the students to do in the STEM Labs. As I mentioned before, you have used a tiny proportion of the parts from your kit in building the robot. With what is left, look at how you can brace the tower on which the arm is mounted.
This robot is used as part of the STEM Labs, It needs to be possible to build it quickly. It is also modular, so the Base, Simple Clawbot and Clawbot are all iterations of the same basic design.
Students are expected to use these concepts as a basis on which to improve from.

The 1st Generation Clawbot is different, but not necessarily better. For example:

You could certainly build a similar style Clawbot from the 2nd gen education kit that shares some design ideas with the 1st gen one, i.e. shorter lifting arm tower, mounted at the front of the robot, shorter lifting arm without the parallel linkage.
But perhaps better would be to take the 2nd Gen Clawbot as a basis and address the weaknesses you have identified. Brace the tower and look at how you can lower the mounting point of the claw to collect objects from closer the ground.

I think you’ve found this page: IQ Build Instructions - Downloads - IQ - VEX Robotics that has other designs and things you can build.

Any of the robots with the tall backs have an issue with the back coming off the base, but extra pins help. You should be able to build all of them, you may need to do some custom fits to make it work.

The walking Trex works, but it’s super sensitive to the build. I like Ike as a fun robot to build.

If you are just going to mess around with the robot, let me suggest getting Build Blitz. https://icuracao.com/hexbug-vex-build-blitz.html is a link to kits that are 1/2 off. The motors are not compatible, but all the plastic parts are.

Costco also sells the VIQ kits for Christmas for also 1/2 price. The are not motorized, but give you a ton of parts to use.

@Sharky_do is most likely talking about last year’s VEX IQ challenge, where you had to hang on to an elevated bar and lift your robot

You could try adding a torque gear ratio

Makes sense. I have not seen any competitions except a mock competition at my son’s school.

Seems to me you have a mechanically functioning robot. I would suggest it is time to invest some efforts in learning how to code the robot instead of using the default driver program. You will be able to set the stopping functions of the motors and adjust your drive controls to have a better response than what you are currently seeing.

That will be my next thing to do, learn how to code the robot. I suppose the vscode app has just-in-time documentation feature but is there a more complete programming manual explaining the different classes and member functions and especially the tasks or threads so I can read it? “Just-in-time” help isn’t a great way to learn coding. It’s more of a convenience than a way to learn from a manually, systematically.