One of the interesting things in my life was the start of FIRST robotics (I wasn’t there for it) and what IFI (the parent company of VEX) did back in the day.

This blog post by John V Neun describes the early days of FIRST, IFI, the start of VEX, hexbugs, etc. It’s a pretty interesting (but long) post. For the many that are not going to worlds it will give some appreciation to the backstory and how much VEX Robotics has grown. JVN’s site is also well worth browsing, he’s got lots of great things on how to manage competition robotics and how Team 148 does things.

There have been a few posts since Christmas about how to run teams, reading the tips from JVN is well worth the time.

I have read the story a few times over the years and its a fascinating read. JVN is really an engaging writer.

BUT if you read it you can see the insanity that is the way FRC works and “mentoring” in their eyes.

What was my role on the team that year? They asked me to design some custom mecanum wheels out of sheetmetal.

I also convinced the team to let me do a custom single-reduction gearbox for them to save some weight (this design is very similar to a product VEXpro would release almost 10 years later).

If you walk into the cafeteria you’ll see the Robowrangler banners hanging where Tony insisted we display them with pride.

While I only have a passing experience with FRC (my son was on a team for 1 year), my (charitable) observation is that it seeks to form mentor/mentee relationships between students and adults with an eye towards potential future employment.

Which is greatly different than VRC’s student-oriented model. Like anything, there are pros and cons to each. At this stage in my sons’ lives, VRC makes the most sense.

If you walk into the cafeteria you’ll see the Robowrangler banners hanging where Tony insisted we display them with pride. 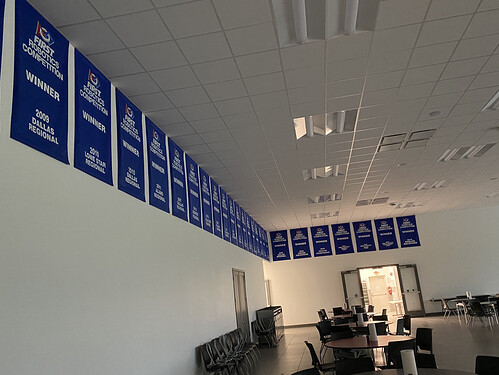 This is almost all of them.

Ya its an amazing achievement, I just thought its a weird amount of ownership for the success that is in theory the students.

form mentor/mentee relationships between students and adults with an eye towards potential future employment.

Yep, and I’ve tried buttering Bob up for YEARS to see if I could be an intern there

They seem to have a crop of pretty intense FRC team participants. I think @DRow is one too?? I know that @Art_Dutra_IV was well known in the FRC world before he went to VEX @chuck.glick was one from the PA VEXU program that ended up there.

At one time they had a huge house for interns to live, I don’t know if that is still the case.

This is almost all of them.

Missing a very important custom one in particular.

That one will always be my favorite

Remember that VEX/RECF have different goals and mission statements from FIRST/FRC. FRC specifically doesn’t have a “student-centered” (or “anti-mentor” depending on who you ask) policy. For well-established teams in FRC, it’s relatively common for adult mentors to lead some pieces of the design. This can work very well to supply students with hands on experience in a more professional setting than sitting on foam tiles alone building a robot from a kit. More of a side-by-side approach to mentorship can empower students beyond the expectation of hands-off adults in VRC. It can lend itself to more mutual respect between mentors and students when they feel like they share the same goals: build a good robot, compete effectively, and learn along the way. In VRC, it’s hard to develop this sense of mutual respect when mentors are excluded from some parts of the process. It’s a fine line. I don’t think adult mentors should be allowed to drive the robot. But I do think FRC’s ability to retain passionate mentors who enjoy building good robots is a net-positive for students. Passionate mentors who believe in chasing excellence alongside their students, rather than acting like teachers in a classroom, can be very effective at inspiring students to go into STEM and convincing them to respect themselves and their own ability to be successful.

I don’t mean this to sound like a personal jab. I just know that you’ve been in this program for a long time and I know others who share the same sentiment that FRC is a bad program because of mentor built robots. I’m not sure of your experience with FIRST, but I ask you to consider that there are well-established programs, with very hands-on mentors, that consistently improve the lives and engineering/professional skills of many students year after year.

FRC is a bad program because of mentor built robots

There isn’t a thing as a mentor built robot in FRC. This is something that has been discussed and argued over for decades on ChiefDelphi. @JVN isn’t at VEX any longer and I don’t know if he still looks here, but he will tell you that 148 roboteers build the robot.

I agree 118%. I have worked with FRC 148 many times and I have always been blown away by how they impact the community. They are one of the programs I am talking about. They have consistently had strong mentorship and incredible students.

Personally I don’t even hate FRC. I competed in it for a year and I spent a while working on WPIlib, you can find me listed as former WPIlib developer .

It just leaves a poor taste in my mouth reading about the way he describes mentors taking such ownership over both the success and the design decisions of the team.

There are students I have mentored over the years and I am incredibly proud of their success. I just would never call it my success.

But on the distinction of VRC vs FRC there is an obvious difference in approach, one where neither side is strictly better than another. FRC is focused on making the robots feel as real and exciting as possible by pairing students with real parts and industry professionals to inspire them to do STEM later. VRC is focused on learning to do STEM now with whatever parts that would be safe to do so with (simplified toy components) and with as little barrier to entry as possible.

From a societal impact maybe the huge celebrity stuff of FRC is bigger. And by design from an excitement perspective FRC is obviously much better. (Kick back relax and grab yourself a beverage).
But when I compare how a single student or a pair of students on a team in both programs can improve their teams performance in competition its clear in VRC the sky is the limit and in FRC it isn’t.

I think you’ve touched on something very important here: there is immense value in both programs, for different reasons. For school districts that can support both, it’s beneficial to allows kids to be on both a VEX and an FRC team. I wouldn’t give up my experiences in either program, and I now encourage my students to dive deeply into both.

I find JVN’s pride in his team inspiring. I can see why it would be shocking that an adult mentor is proud of the parts they designed for the high school team’s robot. However, I find that the excitement and genuine care that mentors like JVN bring to their teams is vastly more important than making sure each team competes “fairly” with a student-built robot. Part of having a successful FRC team definitely is having experienced adult engineers. The technical challenge is almost always just far too hard to expect equitable outcomes.

A huge focus of FIRST is changing culture, which I think they have been doing quite well at over the past 30 years. I would rather that program continue that mission, and allow VEX to step in and take care of the equity problems in STEM. Most FRC teams would better serve their students by being a bunch of VRC teams instead. Without the massive amount of funding and technically savvy mentors needed to be consistently successful in FRC, it’s often counterproductive to scrape by in FRC when the funds and educators’ time could be so much better utilized by running a handful of VEX teams with 2-6 students each.