How do I get more speed out of a blue cartridge motor for flywheel?

Currently running a blue cartridge motor with a 7:1 gear ratio for flywheel drive. I tried a second motor but that didn’t add much more speed at all so we took it off.

Speed will be determined by the gear ratios you use. Assuming that “full speed” was obtained by the first motor, adding a second motor would have no effect on the speed, but it would increase the available power–meaning that after shooting a disk, the flywheel would come back to full speed more quickly.

To make it all go faster, change the gear ratio. As it spins faster, you might find you need another motor to keep it up to speed (or to spin it up from a stop faster).

You could also remove the cartridge and just use a direct 1:1 flywheel gearing

Two motors will not increase speed unless there was too much stopping force before the second motor then it will add more power which will increase the speed.

I did some research and the maximum speed achievable by a blue cartridge is 600 rpm. I am only getting about 450 out of it. Is there a way to increase the power/speed of the motor. Another idea i had for shooting it further was using a pneumatic cylinder to push the disc into the flywheel but the pneumatics I ordered wont come in until next week

I am only getting about 450 out of it

I’d say the most likely culprit is friction. Are there any photos or videos you can provide? 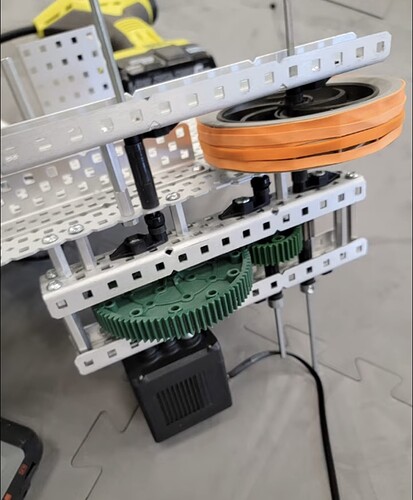 we used a similar design 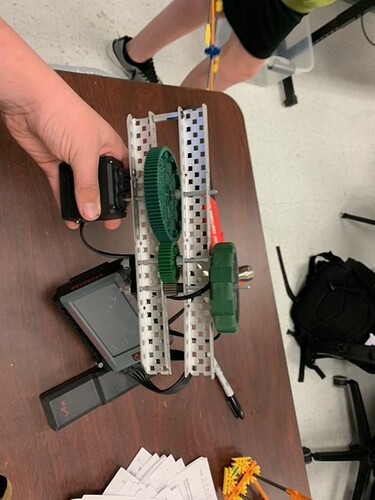 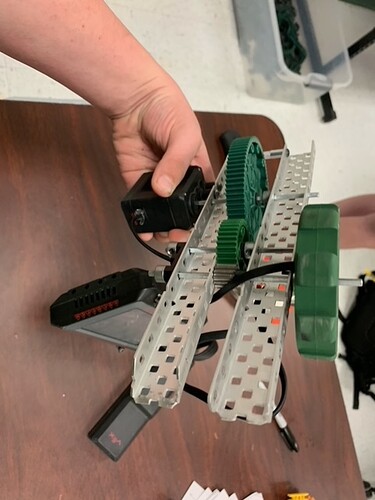 Just a heads up, that 3.25" traction wheel won’t work well for a flywheel because of its inconsistent diameter, I would switch to a flex wheel or a 4" traction wheel.

Oh. well I guess then keep using it. I’ve never tried it because I figured it wouldn’t work 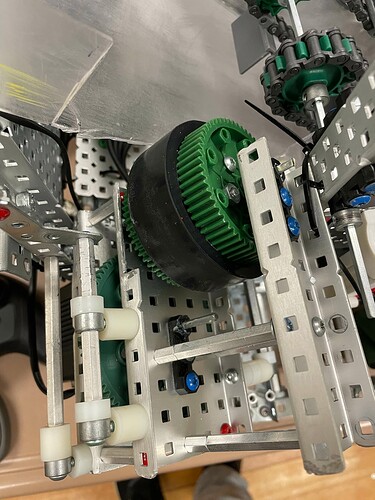 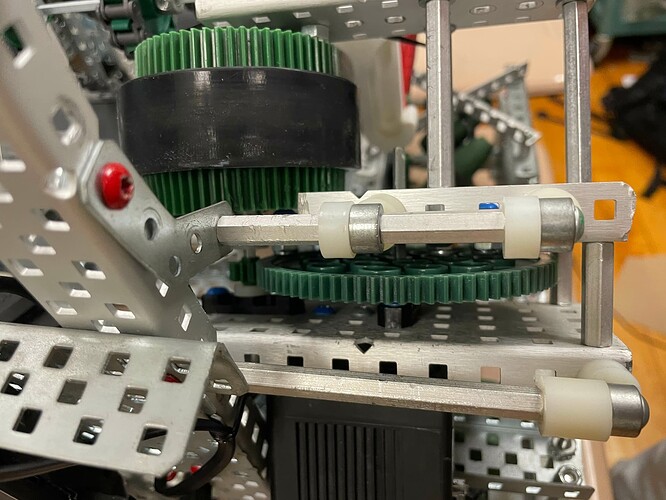 IMG_1661-430B01920×1440 210 KB
These pictures are from today. We were not getting enough speed to launch it far enough, because the wheel is considerably heavy, and we causing too much friction, even with the bearings.

We used lithium grease to solve this, by putting it on the shaft at contact points.

We are using a 7:1 ratio, with a 600rpm motor. This is well over enough to launch it across the field when at max speed. Friction we found is the largest issue.

You get flex wheeels and your in middle school?

You get flex wheeels and your in middle school?

why not? nothing in the VEX ordering system says FLEX wheels are prohibited for middle school teams

No, its just that coaches usually don’t let ms teams to get flex wheels.

@SteveTheSteve4020 what is the speed of the motor after removing the cartridge?