How do i pair 2 cortex brains to each other?

I am new to robotics and have 2 cortex brains i am trying to pair together to make a giant robot not for competition but for the fun of it. How do i pair the brains?

Brain may be rusty

but I do not think it is possible with Cortex systems …

This feature may be limited to V5 Brains due to clever OS and faster processors and communication subsystems.

You might be able to connect the two together through their io ports - I think this was done in the past, but not as a standard feature of the brains …

The Cortex supports talking to arbitrary devices via UART and I2C – shouldn’t be too hard to send messages between two cortexes via one of those.

Unless by “cortex” you happen to mean the V5 brain (which sometimes gets incorrectly called by that name), in which case see this PDF: And if, as @holbrook said, you actually have old generation Cortex hardware, then you can follow this procedure:

Summary The code linked at the end of this post allows two cortex controllers to be connected using their UART ports. The master cortex (with VEXnet and joystick) controls the slave cortex (no VEXnet) using the example communications protocol. **Background ** I’ve posted about serial communications before in the ROBOTC programming tips thread, however, I wanted to show an example that was a little more developed with bi-directional communication between two devices. For some of the product… 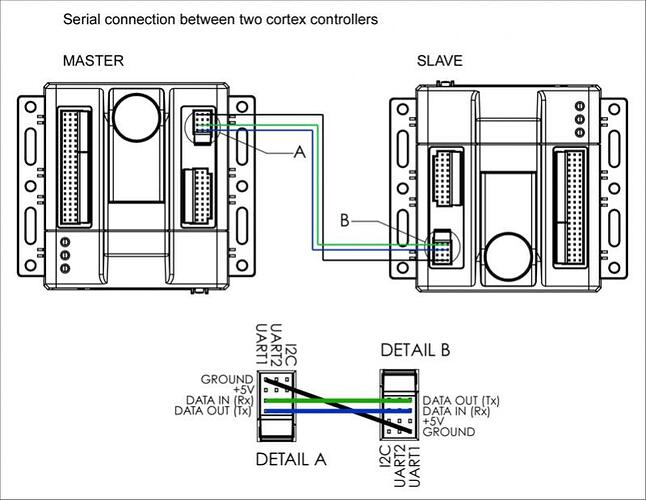