I need to make something drive fast. I shoulld probably specify that it is the classroom kit

Hey, I’ve gotta create a fast car for STEM. I have to use the Vex Clawbot. Any suggestions on how to make it fast?

use gear ratios on your drive train 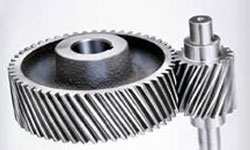 You see gears in just about anything that has spinning parts -- car engines, transmissions, VCRs... Learn what these gears are doing and get to the bottom of the "gear ratio" concept!

Thanks. This is gonna help a lot.

I have to take the clawbot kit and make it fast. I don’t need to use all objects, such as the claw.

I have to take the clawbot kit and make it fast. I don’t need to use all objects, such as the claw.

Strip everything down… Basically make a drive base but with longer beams. Then, line up gears so that the motor is on a 36 tooth and the wheels in on 12 tooth.

If you want to be really wild you could put two motors on each side.

It will be hard to control, but super fun.

You may need to do some creative reconfiguration on the robot. To make it go faster you will need to increase the gear ratio. Clawbot has the motor connected to the rear wheels with 36 tooth gears connecting the front wheels.

You will need to connect a bigger gear to the motor while that gear is connected to the existing 36t gears. So, you can put a 48t gear to the motor and have that connect to the 36t gears. You will have to raise (or move) the motor around so that the gears fit. You can use the 4x tower beam that connects the claw motor and touch led, and move that to the back and attach the motors to it there. Get rid of everything else if you don’t need it (like the front claw and motor). Move the brain to the front since you need that space for the drivetrain motors.

This isn’t in the standard kit, and the 60t is too big and will drag on the floor…

I can not add to the directions, I think everyone has covered it. I just wanted to offer my observation: last year my kids doubled the robot speed by using 48 tooth gear to drive 24 tooth gears. They found it pretty much uncontrollable on the field. It was just too fast in that 4’ X 8’ space. They immediately went back.

Does it need to turn?

You’re right about the 48 not being in the standard kit. Yeah, never use the 60 on a wheel (it’s bigger than the wheel)… it has to be on the motor and motor can’t be on the wheel if OP wants to go faster… This is the thing about starting off with the standard builds… drivetrain modifications basically mean just build yourself a robot from scratch… I would also normally recommend chains instead or gears in-between the wheels, but those aren’t in the standard package either… chains would be so much easier.

You can mount the 60 above the wheel, vertically.