This past week at worlds it was discovered that there had been a number of teams, primarily from China, using illegal batteries and chargers as per the rule <R13>. One of the teams that was discovered to be using the illegal batteries and chargers was in the Arts division at worlds and they were allowed to continue playing after buying new legal vex batteries and chargers from the store. That team, 8825A, went on to be the division finalist and was not disqualified from the competition. Teams from other divisions were also found to be using the illegal batteries and chargers such as team 8229B pictured below in the Science division. It is not fair to teams using legal batteries when these teams are allowed to compete with lithium batteries and synchronous balance chargers which are capable of charging batteries up to 20 volts. This issue was brought to the attention of VEX and RECF officials during the elimination rounds of the Arts division, but the teams in question were allowed to continue playing after buying legal batteries despite their violations during all of their previous matches at the world competition. The teams using these batteries caused the competition to be unfair and it is disappointing to see that the rules were not completely enforced and these teams were not disqualified, but instead they were awarded the division finalist award. I wanted to bring this issue to the attention of the community as well as the VEX officials. I also would like to ask how this will be handled in the future. Could battery voltage be inspected as motors are at worlds? Also, could spot checks of batteries and chargers be implemented for the teams in the division finals similar to the spot checks of the motors during division finals. I hope this will not happen at any of the future World competitions because it is unfair for the teams following the rules. 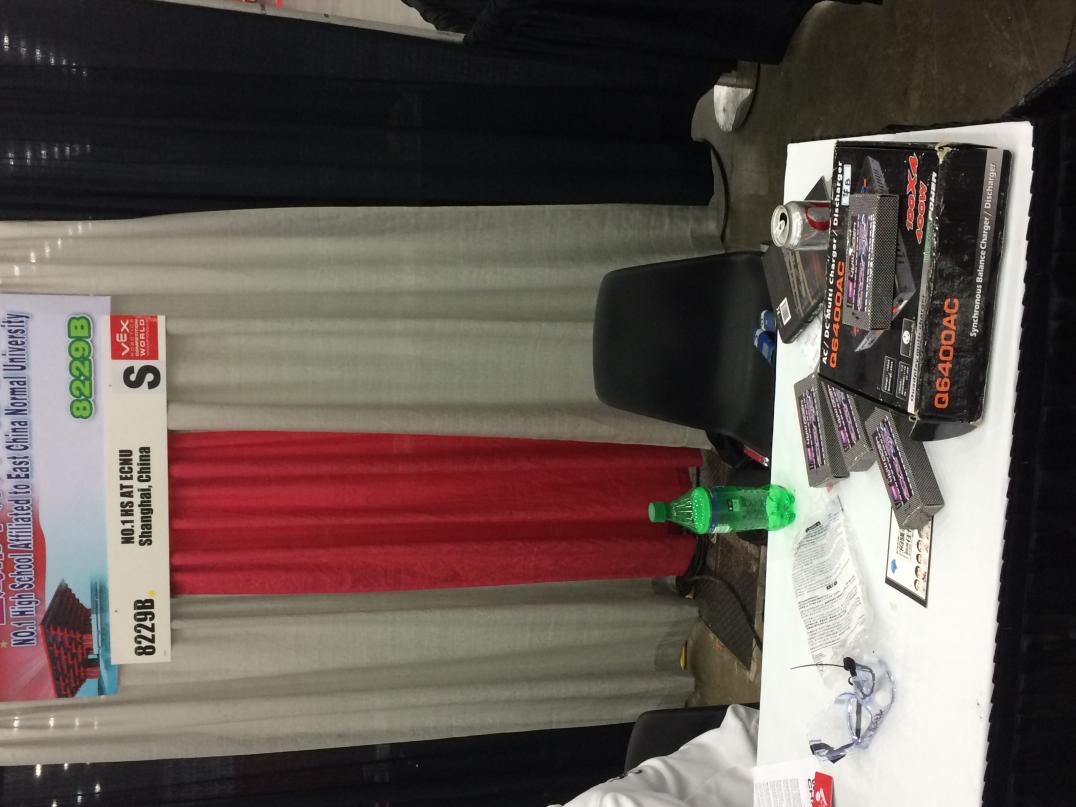 I’m not going to comment too much on this beyond saying that your information is not completely accurate. No one, to my knowledge, was found to be using illegal batteries on the competition field (in Arts at least).

The batteries being used ON the robots at a given time may have been legal batteries, however Karthik did collect illegal battery Chargers from teams competing in the arts division and that is a fact. I would just like for this issue to be looked into further so it is ensured that there is a level playing field for next year.

Using non VEX batteries is fine when you are practicing, and there are many teams that use them when working on their robot during the season. The main advantage is that you can keep running without changing batteries for a long time and save your VEX batteries for matches.

I don’t know if/when illegal batteries were used, but if they were not used for any matches, in my opinion I would see it as fine. I can though see how this can be a cause for concern, and also why they might have been collected (if that is the case).

The only time I saw “illegal” batteries was at the practice fields. In this case it is not illegal…it is smart. It allowed those teams to practice/program for longer without needing to worry about batteries. I never saw an illegal battery used in an actual match.

Just because you see them in someones pit doesn’t mean they are cheating.

The non-vex batteries and chargers were in the pits and teams in the elimination rounds were seen taking batteries off of the illegal chargers and running back to the robot before elimination matches. RECF officials told teams prior to elimination matches to stay at the fields as long as they were still competing. I am not basing this all on the assumption that they were using them during matches and not only for practice. Other teams as well as I saw the teams charging and placing batteries on the robot prior to the match. 8825A scored 20 points lower and their robot was noticeably slower in the division finals matches which was when they were required to use vex-legal batteries. I know that it is common to use during practice but it is not legal to use during matches. I hope that there will be a way to inspect this prior to matches in the future.

The RECF made a decision about this already, I’m also quite sure they told you to not bring this up to the greater community. Anyway, it’s over and nothing can be done now. Since my school runs events, I’ve seen LiPo batteries on chargers, and I’ve asked the teams what they use them for. If they aren’t used in matches, it really doesn’t matter.

These rules came into play because this was one of the methods that teams previously used to get an advantage.

I don’t agree with calling the teams out by name, but it is a problem that needed to be dealt with.

At Sack Attack Worlds, 2915A posted 400 points in driver’s skills. This was viewed as incredible feat by many, an impossible feat by some, but no surprise to those who knew Jack and had competed against him. 2915A then came under intense scrutiny for using non VEX chargers. Many teams were using non VEX chargers then, as they were not illegal at that time. When asked to use a VEX charger, the amusing thing was that the VEX charger resulted in a higher battery voltage than the non VEX one.

It seemed sad to me, and not very nice for Jack, that some people quickly assumed some aspect of “cheating” to scoring 400 points rather than assessing that 2915A clearly had the best robot and the best driver at Worlds that year.

I would suggest to look harder at why these Chinese teams were doing well. Perhaps they might just have had really good robots, good drivers and done a lot of hard work?

I think they should have checked the battery settings on the chargers. Illegal chargers can be set for legal battery charges. If Battery tests showed the batteries were not overcharged, I see no problem with using the chargers and letting the teams off with a warning and making sure they do not do it again.

I have an illegal charger to use with a set of Not for competition practice batteries. My illegal charger charges four batteries at a time and is signifficantly faster than the Vex chargers. I set the voltage at 7.2 volts and the batteries do not overcharge.

There are benefits to illegal chargers other than the ability to overcharge batteries. My club has 23 teams so I wish I could use illegal chargers that quickly charge 4 batteries at once at legal settings for competition but I cant.

There might be other reasons those teams use the chargers other than a desire to cheat.

We had to purchase two more chargers at World’s because our VEX chargers have broken a good bit. Either the switch gets jammed or they just don’t charge. I would love to use someone else’s charger. But, the whole point of VEX is to use their parts so we are all on the same playing field and innovation, not other things, allow for a great experience. Given that, my opinion is that only VEX chargers should be allowed in the pits, practice or tourney fields.

hi, I am a team member of 8825a, the team which you claimed to be using illegal batteries. I have to say we are really upset and angry to see this because we see it as a slandering of our reputation. Your whole questioning is unreasonable because you have absolutely no proof to support your claim. Also, I believe you are questioning the capacity of all the vex competition referees, for that we have successfully passed the robot inspection. Actually, our batteries have even been inspected during the elimination section, and we accomplished our highest score, 99 points after inspection, so in conclusion we couldn’t have used the illegal batteries, and we wish this thread to be deleted right on.

I’m not sure what to do with this thread, I feel uncomfortable deleting it but I am going to close it for now so we don’t get into unneeded debate on this subject.

I was present during these matches but I don’t have all the facts so will not comment further.

I will leave it to VEX or RECF admins to decide on any additional moderation.