I know its been asked a million times but here’s the thing, i’ve seen atleast 15/20 teams whose robot i’ve closely inspected use vex iq chain & sprockets. Plus they’ve used them at every comp so far. I’ve even asked the head ref before; and everyone and their grandma says its vrc legal.
Im guessing its legal since they aren’t extremely different from the vrc sprockets and chain, just smaller and slightly better.

Just added to the VEX Website: 6P Sprockets. [6PSprockets] These various sized Sprockets were originally only found in VEX EXP kits, but now come in packs of either 4 or 8. They have a smaller diameter than the pre-existing High Strength Sprockets, which allows for the construction of smaller, more compact mechanisms. Note that these sprockets are only compatible with VEX IQ Chain (which is now legal for use in VRC), and will not work with the pre-existing V5 High Strength Chain. 6P Sprocke…

So you don’t have to guess anymore, about this or future new products, the place to look for VRC part legality is the parts page on the vexrobotics.com website. Legal parts are identified with a tag that says “VRC legal” like this: 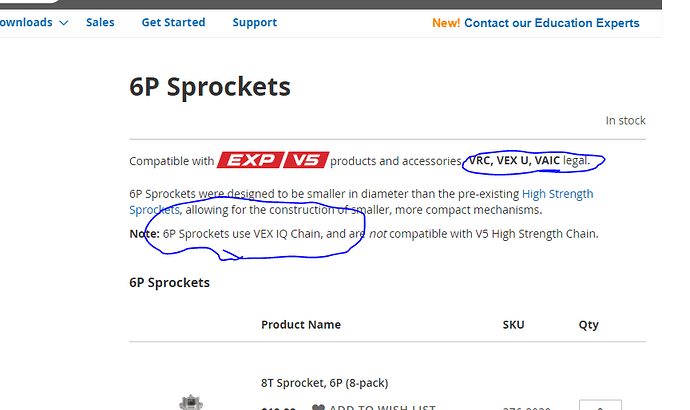