Now that worlds is confirmed to be virtual, we need to put our heads together and make it the best it can be.

This topic is for everyone to express their ideas of an ideal live-remote change up match, and to create a widely liked system of the game. In other years this would be easy, but this swing game has been quite stubborn and won’t make things any easier.

Come on, what do you got? As wild or as simple as you can think!

The VEX Robotics Competition community is counting on YOU.

How exactly would this work?

Honestly, I think it would be great if there was a way for teams to get in contact with each other for strategizing.

VRQ is a Live Remote community on Discord where teams can discuss this, heres the link: https://discord.gg/NeWMJUF

As Aryan mentioned, a large amount of teams use Discord to communicate, with a variety of servers for different aspects of the competition. The unofficial vex discord server can be found here: https://discord.gg/AzJyuhF

This topic is for everyone to express their ideas of an ideal live-remote change up match, and to create a widely liked system of the game. In other years this would be easy, but this swing game has been quite stubborn and won’t make things any easier.

Come on, what do you got? As wild or as simple as you can think!

The VEX Robotics Competition community is counting on YOU.

The “ideal” LRT match, assuming you mean everyone plays perfectly, results in repeated ties. This is just an inherent flaw with the LRT scoring system for Change Up, and I don’t think there’s any way to make it better if we have to use this field and elements. This is because if you are unable to own any of the goals in a diagonal on the field, you cannot complete a single row. This means that by maxing out a diagonal, all you have to do is start by using your robot to hold a 4th ball in the center goal and double it, and if your opponent tries to double a corner, you just double that corner as well. Thus, everyone will make some variation of this combined alliance field in driver control (this is for red alliance): 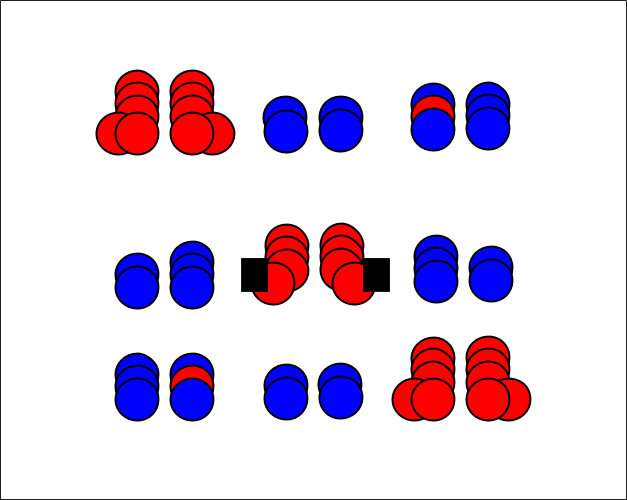 This wouldn’t be a problem if you couldn’t max auton, but since you’re restricted to half the field, and you only have 6 open spots but 5 balls of your color, you can max auton, and teams will. I wouldn’t be surprised if a BO3 LRT world finals goes upwards of 10 matches (assuming there are enough good teams that choose to do it instead of remote skills). Since you have a full 1:45 for driver, top tier matches will come down to whose auton messes up

That relates to one of my thoughts. Maybe there won’t be an autonomous line for worlds, I mean there’s no other robots to mess up.

This could add so much good chaos to the swing game. One robot scores the home row for the win point, but then an opponent drives down and breaks up the row. Sure it could disrupt a score, but the actual autonomous remains untouched, just as the line was meant to do.

This could prevent constant ties in autonomous, and important 6 point bonuses.

This could add so much good chaos to the swing game.

No it wouldn’t, it would just make a deciding factor other than bot failure.

This could prevent constant ties in autonomous, and important 6 point bonuses.

Correct. This is the easiest solution in my humble opinion.

I think a 1v1 format or a way to give more points for speed of scoring in 2v2s would be more balanced for good teams with tough schedules. Instead of just barely getting a high score at the end of a match, teams could get points for how fast they connect rows/score goals with their partners, so even if the match isn’t necessarily a fair one, teams can still be rewarded for performing well. Admittedly I haven’t been keeping up to speed on the whole remote scenario but if this is feasible I think it’d greatly improve the competitiveness and reward of competing in a virtual tournament.

after reading a bunch of the replies here I think it is really going to come down to home row completion and auton. if everyone 100% tied but you get the home row durning auton you get op points.

so my take on is this will be very interesting

Getting home row on your home field is very very easy

well you see lets go thought a list of things I have’t done yet and have 2 days to do.
1.score a ball.
2. descore a ball
3. run the drive in 3 months
4. wright code
5. make auton
6. tune auton
7. destroy bot 1 hour before comp because it is bad and rushed and I hate it

so the whole auton win point thing is coming from me not knowing anything. And now to re read the rules because I don’t remember how auton win points work for live remote

I just hope we A: qualify and B: can order the hoodies with our name/number/nationality.

I like the idea of being able to play defense on auton. This would add some more variety and I feel would be more exciting, but once again, people will just figure out how to max, and then only do that. Because this game is so easy to max, there isn’t much that we as a community can do.

Ok I have an idea.
We need to have an incentive to descore balls, in spirit of the swing game.
I was thinking of FRC, where sometimes teams would have to do different random things in matches, such as spinning a wheel to a random color or a certain rotation.
Maybe we could get crazy and change the game in the middle of a match to a random circumstance. Goal H is worth double points! Goals are only scored with uniform balls! Red balls are worth -1 points! Connecting horizontal rows are worth double points! Goal E is null and void!
Something wild like this would give teams a reason to descore. No more sitting around for 15 seconds, no more dropping in 6 balls then being done. With that we could utilize the full of the game, compared to the current half (scoring only).

I know that as a competitor at an LRT who had some internet troubles at the beginning of the day, I would hate having rng implemented in the middle of matches. If it was decided right before the match started, that would be one thing, but introducing it halfway through would not be fun. I think the easiest solution is to drastically limit the time allowed for driver control.

I hear that, I’ve also done a LRT and the internet troubles were terrible. Maybe there could be a special timer in the room that still gets the same alteration as the others.
I think the beginning of a match is better than what we got, and I would be quite interested in that, but the middle of a match would add the regular “panic” that happens at a regular tournament.
I don’t really care how it happens, teams just need a reason to descore, it’s half of the whole game.

Point of the story, your proposal is definitely better than what we have now, we just need incentive to descore.

If the auton line stays, we need to do standard scoring rules for autonomous. Because the home row is untouchable by the other alliance, they can have standard scoring. If I take out the opposing ball, I should still have ownership of that goal, not the team I just descored. This would allow more variance in autonomous because the teams that can properly descore will be rewarded for their efforts.

If the auton line goes away (which it should for online), we can stick with “goal score” for that autonomous. Now that teams would be able to touch the other home row, scores can be disrupted, and runs will be flipped on their head. Instead of a race for the home row, which isn’t hard at all especially with an alliance, there can be an autonomous battle for every single goal on the field. This can create major point swings, and hood autonomous fights.

On the contrary; if the line stays, descoring needs to be encouraged. You only have access to 5 of your color but have 6 open spots to score them in, meaning people can and will be maxing auton since all they have to do is score. If they have to descore too, things become more interesting.

That’s exactly the point actually. With the current scoring rules for online, descoring at all can only hurt you. So if there was a modification at least to the autonomous rules, then the teams that are able to reliably descore through a written program, will be rewarded for their efforts. And it will be a little tougher to get a maxed auton creating a better battle.